It’s not easy for small towns to distinguish themselves these days. Without a major attraction like Pictured Rocks or the Porcupine Mountains nearby to drive tourism… most U.P. locations have to rely on established business and industry to thrive, or survive.

So how does a town like Negaunee, with iron mining unpredictably ebbing and flowing, compete with the likes of Marquette and other area destinations?

The heyday of Irontown is a quaint memory for those of a much older generation.  The once bustling downtown has given way to long empty buildings either torn down or fallen down.  And long-standing businesses have gone the way of the general store and the fix-it shop.

But it appears that a handful of entrepreneurs and a little hard-wired civic pride might be just enough to make a difference.  If you haven’t been there lately, you might be surprised at the new look of the old town.

While the locals do much of their daily shopping out on the highway, near or far, downtown is suddenly becoming chic again for food and beverage.  Recent additions like Jackson’s Pit and Smarty’s Saloon have earned loyal followings while established favorites like Tino’s and Barr’s continue to satisfy the hungry, thirsty, blue-collar regulars. 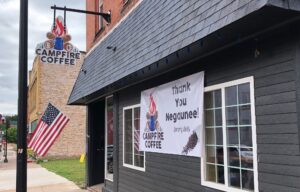 The Midtown Bakery & Cafe gets good reviews and no small-town revitalization would be complete these days without a bike boutique and the obligatory coffee shop, in this case, the new Campfire Coffee.  Co-owner Ryan Nummela is pumped to be a part of the re-birth of the city. “As a Negaunee native, seeing some of this foundation being laid out, I was very excited to invest into my hometown and be a part of the positive energy and revitalization.”

Throw in the Eagles, Elks, and VFW and you’ve got quality options that make downtown Negaunee worth the trip.

And there’s more on the horizon than sunsets over Teal Lake.

The Upper Peninsula Brewing Company is poised to become a fast favorite of area brew pub enthusiasts.  Owners Jim and Ann Kantola have had a hand in much of downtown’s revitalization, but this latest endeavor might be their best work to date.  Located on Gold Street, just up from the VFW, this new facility was originally a meat processing facility and more recently LaFreniere’s Furniture.  Chances are you won’t recognize it.  The new brew pub will feature two floors of bar space and plenty of outdoor seating. 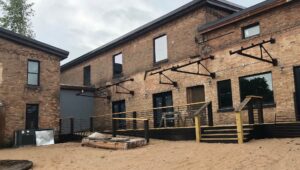 The Upper Peninsula Brewing Company… a work in progress

Brewers Rob Stoll and Erica Tieppo will lend their unique styles to a full selection including 12 beers, a non-alcoholic sparkling hop water, and a craft soda on draft. 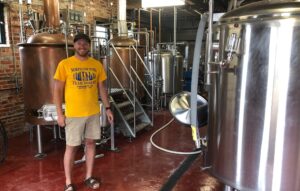 They hope to start brewing Monday and anticipate opening in August.  Along with his pub, Jim sees good things happening in Negaunee.  “There’s been a renewed appreciation for downtown Negaunee and that’s good to see.  There’s still more work to be done, but I believe the city is heading in the right direction and it’s exciting to be a part of it.”

Smarty’s owner, Scott “Smart Car” Soeltner, is a true believer.  “The city is rounding the corner to the future and new businesses are popping up all over town!  It’s great to see these new faces in our neck of the woods.”

David Nelson, Planning and Zoning Administrator for the City of Negaunee credits teamwork for a lot of the success. “The business owners in downtown Negaunee support each other.  By working together, the whole downtown becomes more successful.”
Take a peek into some of the closed storefronts and you might see activity inside. There’s a rumor of a restaurant going into the Chapper’s building and of course the Vista Theater has plenty of support to reconstruct that operation. 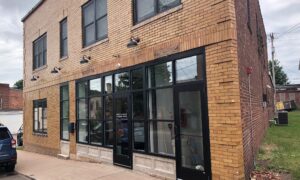 But it’s not just the bars and restaurants that are feeding the resurgence. Mary Luttinen’s accounting firm works out of a restored building on Jackson Street that shows what a little ingenuity can do for an older, yet serviceable building.  The updated Senior Center and the Kantola’s restoration of the old Union Station Depot into a vacation rental and event option play right into the plan of bringing more people downtown.
Nelson says that the city is committed to helping local businesses as much as possible with grants available through Negaunee’s Commercial Revitalization District.  Between the city and private investors, good things are happening.  “Everybody wants everybody else to succeed,”  Nelson says.  Now that’s the pioneer spirit!
And speaking of pioneers… this weekend marks the close of Pioneer Days 2021.  There’ll be entertainment downtown today and tomorrow, the parade on Saturday, and fireworks Saturday night.  For details on the event schedule, visit negauneeirontown.org. 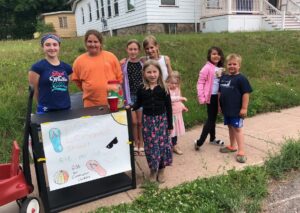 The Pioneer spirit starts with a Lemonade Stand

There’s a whole new generation that sees the city not for what it became, but for what it can become.  A quality school system, affordable housing, good neighbors, and a business community willing to invest, give Negaunee minors a reason to embrace a pioneering spirit for the 21st century.