A Bohnak Return? • Summer Ready • Bald for a Cause

Bohnak Coming Back to TV?

We see his regular reports in the Mining Journal.  We hear him on the radio.  Will we see him again on television?

The word on the street is that Karl Bohnak will be back in front of the weather map with the new station in town, WZMQ.

Confirmed?  No.  Believable?  Sure.  And why not?  It was assumed that Bohnak left his gig at TV6 because he didn’t want to conform to Gray Television’s vaccination mandate, not necessarily because he was tired of the grind.  Although, one might think working the night shift for 30 plus years would at some point become a job best seen in an RV’s rear-view mirror.

But, there’s something about the “celebrity” aspect of being the dean of Upper Peninsula weathermen that’s hard to shake.  We see it regularly with sports and other stars when they retire, only to unretire, before the ink is dry on their two-week notice.

As WZMQ assembles their Marquette on-air team, it would be reasonable to think they’d reach out to Bohnak.  It would give their newscasts some instant credibility, not to mention the attention that would come from the hire alone.

Lending some doubt to the story is the thought that maybe Lilly Broadcasting, WZMQ’s parent company, has a similar mandate requiring vaccinations, or that TV6 has an ironclad non-compete clause in their on-air talent contracts that would prevent someone who left, from working at another station in the market.

And then there’s money.  Retirement accounts don’t go up just because the cost of living does.  He was probably making decent coin at TV6 and he’s always had a few other irons in the fire, but maybe the new guys have made him an offer he can’t refuse.

On the other hand, there’s also the rumor that Bohnak has, in fact, enjoyed his time away from the daily nine-to-five, or whatever it was, and has no plans to get back in front of the camera.

The WZMQ website indicates they’re still looking for a meteorologist, so we may be misreading the cue cards here.  Again, without confirmation, it’s a wait and must-see situation.

Speculating about who goes where and does what is a lot of rumor mill grist, but it has been confirmed that WZMQ has purchased the Kildare Irish Pub building, and if that’s where they’re going to put their studio, they’ll need some local folks in there to do the job.  Why not Karl?

With summer on the horizon, it’s time to start thinking about warm weather recreation and exactly what Marquette has to offer visitors and residents alike.

A jewel in our park system that has some changes in its future is our community campground… Tourist Park.

As tourism in our area explodes, campsites are at a premium.  The Rippling River Resort’s campground has been a busy spot since it opened a couple years ago, and it’s just one of a few in Marquette County that have benefitted from our recent surge in popularity.

With that in mind, the City of Marquette has improvement plans in place for Tourist Park that should ensure its continued appeal.

The official Parks Master Plan, developed in 2019 and available on the city’s website, outlines a number of improvements and their level of priority.  A cursory review of the document shows a few projects that are the usual maintenance updates, as well as some changes and additions that will appeal to a new generation of campers. 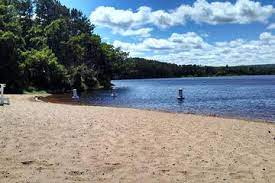 The beach at Marquette’s Tourist Park

According to Andrew MacIver of the Parks & Recreation Department, plans include, “installing the new day-use playground this summer near the beach, as well as some primitive camp sites as called out in the plan. We are submitting a grant this year for the new access road and parking area and that wouldn’t happen until 2023 or 2024.”

The access road will be positioned near where the old road came off CR 550 into the north side of the park.  The plan is to better separate the north part of the park, used more for daily activities, from the south portion, which is primarily campsites.

A pavilion is mentioned in the Master Plan, which would be a great addition.  Outdoor events with an indoor option are always a good idea on the shores of Lake Superior.

No mention of a stage though.  You might remember a few years ago when the Hiawatha group wanted to partner with the city to build a permanent stage structure.  Unfortunately, those plans, for one reason or another, never came together.  Maybe it’s time to revisit that idea.  The Hiawatha Traditional Music Festival would benefit from that and now the new Camp Cannabis festival is planning on stage performances as well.  And with costly repairs possibly being in the Presque Isle Bandshell’s future, it seems like a good idea whose time has come… back.

Officers from the Chocolay Township Police Department, as well as some from the City of Marquette, the Marquette County Sheriff’s Department, the State Police, and neighboring townships, put their locks… and looks, on the line to raise valuable bucks for the fight against cancer. 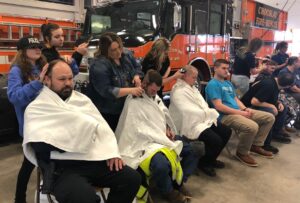 As the largest private funder of childhood cancer research, St. Baldrick’s Foundation (emphasis on bald) is leading the charge to conquer kids’ cancer. And they can’t do that without the contributions from the guys who put their heads, and hair, on the line.

If you’d like to contribute to the cause, go to stbaldricks.org/events/petes2022.

And if you happen to see one of our bald public servants… tell him he looks great, and thank him for the effort.