A Different Look for Downtown and Third Street This Summer

More dining and shopping in the fresh air

PROBLEM: MARQUETTE’S DOWNTOWN businesses have been devastated this spring because of the economic shutdown. Further, even as the economy opens up, the stores and restaurants will face severe restrictions on the numbers of customers they can serve.

And worse, many potential customers won’t want to enter confined spaces where the air doesn’t circulate much.

SOLUTION: Allow the restaurants, bars, coffee shops, and retailers to conduct their business out on the sidewalks and streets in the fresh air.

That’s what Traverse City is planning to do, along with several cities in California, and others across the nation.

And that’s what Pat Digneit, co-owner of Digs on Washington Street, is lobbying for in Marquette. Close off parts of Washington Street and Third Street, he says, and bring the tables, chairs, and merchandise outside, bring in a bandstand for musical groups, and make Marquette a pedestrian paradise.

“I’ve talked to other business people and they say they’d like to do it,” Digneit says. “We need to move forward as a town but we have to do it together. And we have to be safe.”

At the very least, Digneit would like to see some of the streets converted to one way, opening up a lane of traffic to pedestrians.

City manager Mike Angeli understands the enthusiasm but advises caution. “If you close off a street, you run the risk of creating a festival atmosphere, and we just had to cancel our festivals. We don’t want to create another problem.”

Marquette Mayor Jenna Smith agrees. “It sounds like a good idea, but what if you’re planning for 200 people to show up on a block, and suddenly there’s 500 or more?”

Even outside, crowds are not a good idea in this age of social distancing.

However, Angeli, in consultation with the Downtown Development Authority, says the city is considering three options that would bring more of the businesses outside:

That’s exactly what Michele Butler, the co-owner of Vango’s, is planning to do–extending their outdoor dining patio into a small portion of their parking lot. It’s something that would help compensate for the loss of customers inside, where the state mandates that restaurants can operate at only 50% capacity. 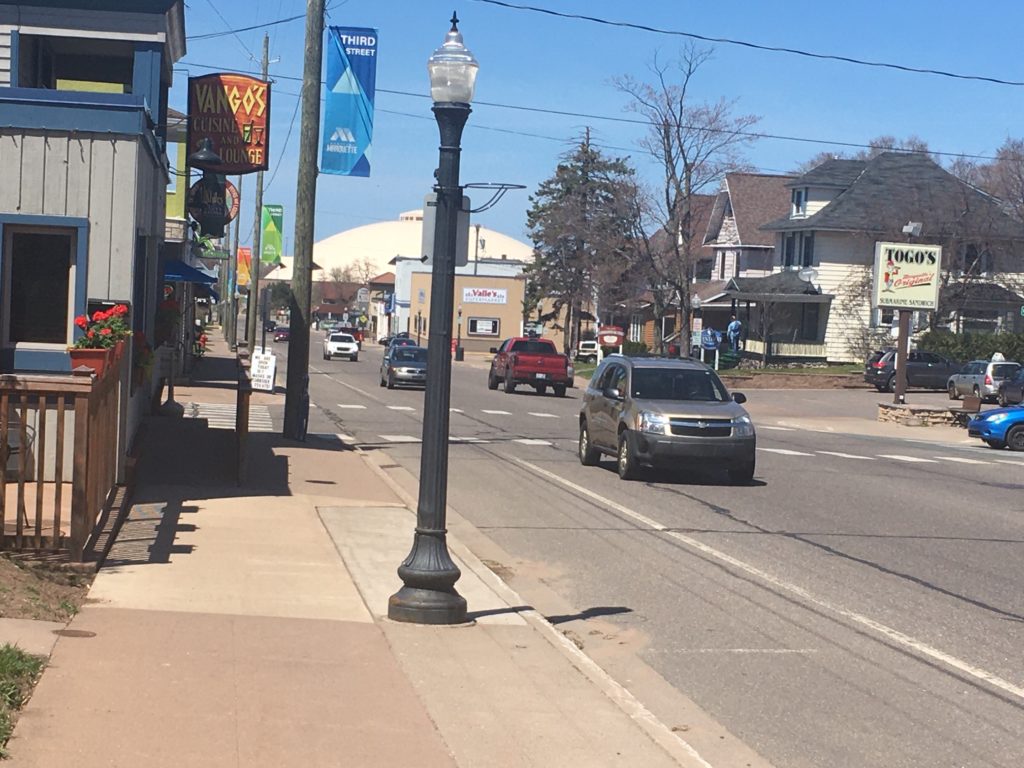 Vango’s and other businesses on Third Street are planning on serving more customers outside.

Mandy Anglen, the general manager of Marquette’s Contrast Coffee, has the same idea. “We’re going to move all our extra tables and chairs that we can’t use inside out on to the sidewalk,” she says.

“I love outdoor dining,” says city commissioner Fred Stonehouse, “and I’m open to any proposals that come up. But let’s not get carried away. Let’s keep in mind that our weather in Marquette is different from most other cities downstate.”

He’s right, and these plans to move outside will likely last only until September when the temperatures start dropping.

Normally, such changes require permitting and substantial fees. But given the crisis faced by so many businesses, might those fees be reduced or even waived this summer? It’s possible.

The City Commission will be discussing the plans in a work session next Wednesday.

Regardless, Angeli says, we’ll see a difference in Marquette this summer–more dining outside, more retailing outside,  more pedestrians, and, hopefully, more money being spent to help revive businesses that were nearly strangled by COVID-19 this spring.

Now we just need the temperatures to stay warm, and the infection rates to stay low.