A Passion for Pastry and Chocolate in a Most Unlikely Spot

And yet almost a year after they opened up for business, Jake and Katie Bonzer are making it at Towners Pastry and Chocolate Shoppe. 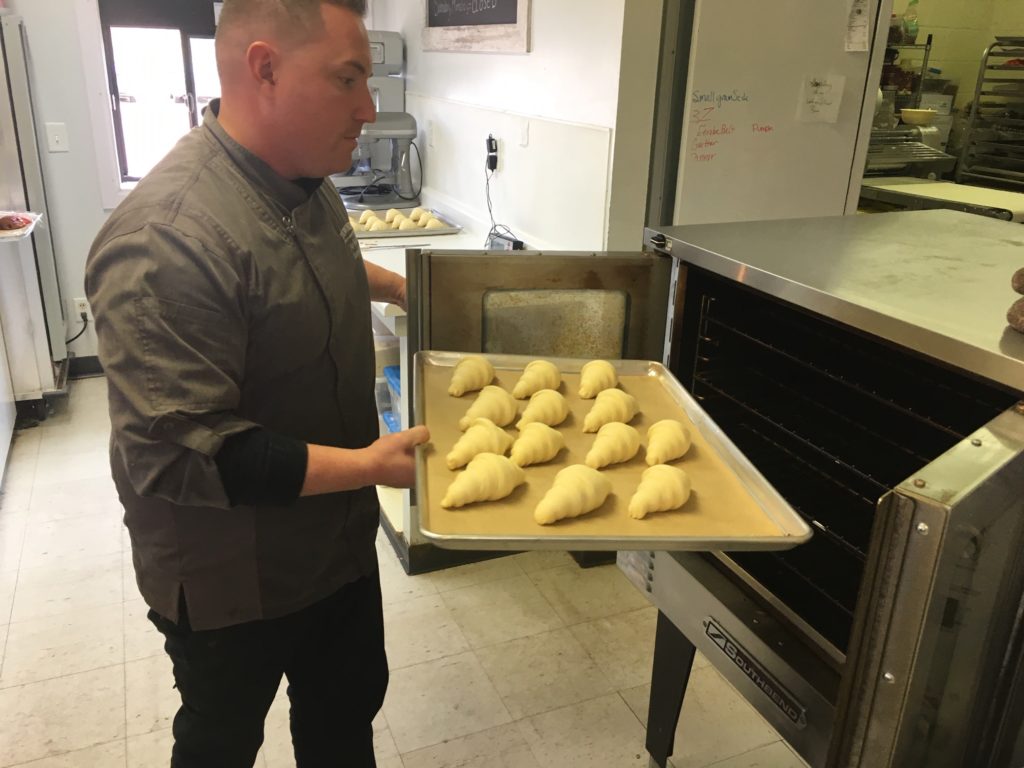 “We’re making close to 3000 croissants a week,” Jake says. “We know chefs in Chicago who aren’t making that many.”

“We made Easter eggs last spring,” Katie says. “I expected to make a hundred of them. I made 1100, and they were all gone.”

This is the unlikely story of a couple who met the day after Jake, a Navy vet, returned from a tour in Afghanistan in 2006. Katie happened to be the daughter of Jake’s base commander in West Virginia.

They clicked, and discovered a common interest in artisanal food. They were both educated at Le Cordon Bleu culinary school in Los Angeles, then she went to pastry school in Manhattan, and he to pastry school in Chicago. Their destinies were sealed. The only question for the now married couple was where they would pursue their destiny.

Turned out to be Gwinn, the town where Katie’s father had grown up.

“There are three reasons we moved here,” Katie says. “And the three are our three sons (the oldest is six years old). They have cousins nearby, they have lots of friends, they can ride their bikes here, and we own our home.”

Try finding a $40,000 mortgage in Los Angeles or New York or Chicago where the other fancy-pants pastry chefs and chocolatiers live. 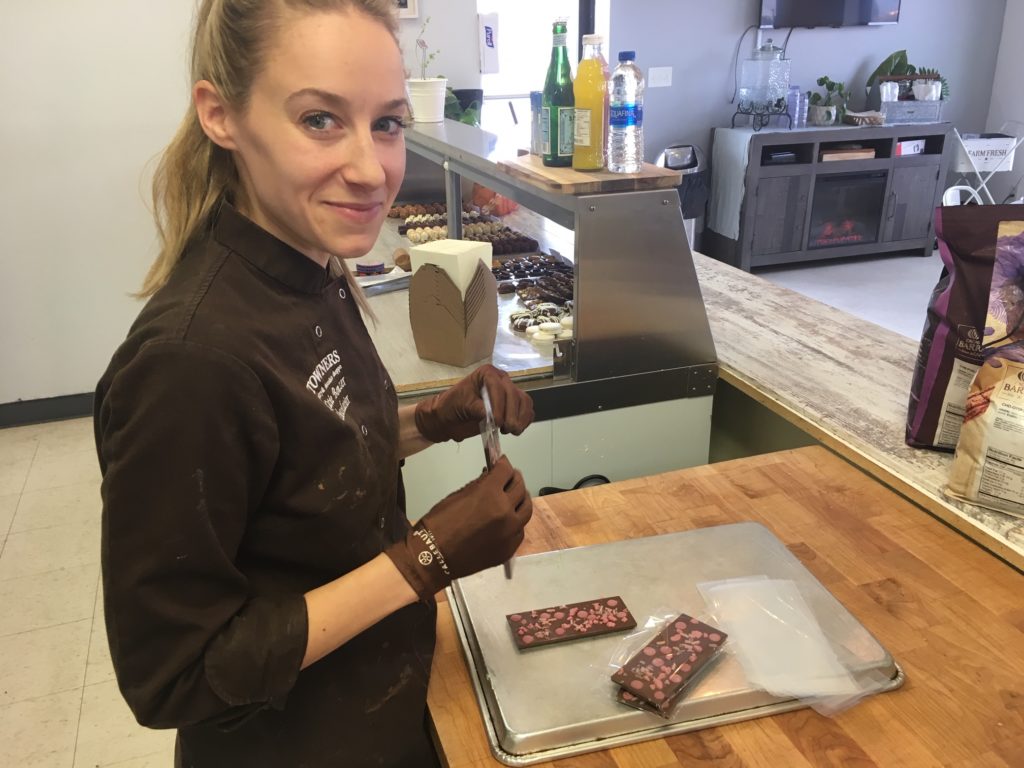 Katie imports her premium chocolate from overseas. “We are married to our ingredients,” she says.

They started as a strictly wholesale business a couple of years ago, baking out of the kitchen at the former Union Grill in Marquette. “But it got so busy,” Jake says, “and I was getting tired of driving to south Marquette every day. It wore me out.” Fate intervened. An ice cream shop across from Gwinn High School closed down. “We looked at it, rented it, and flipped it in 26 days.”

They opened Towners last December and  almost immediately found a busy walk-in business for their pastries, their croissant and bistro sandwiches for breakfast and lunch, and their always popular chocolates. Their wholesale customers include UPHS-Marquette, the Medical Center, Dead River Coffee, Marquette Nutrition, and the newly opened Gallery Coffee in Munising. They’ve had to cancel a couple of their commercial contracts because they just couldn’t handle it.

“You should see us on Saturdays,” Katie says. “The line is out the door. People waiting. Everybody from grandparents to babies.”

The big attraction on Saturdays is Jake’s cinnamon rolls, his one concession to American cuisine. He bakes 1000 of them, only on Saturdays. That’s one for every two residents in Gwinn, but of course, there are plenty of out-of-towners who stop by. Towners has become a destination.

Google lists 47 reviews of Towners–all of them 5.0. 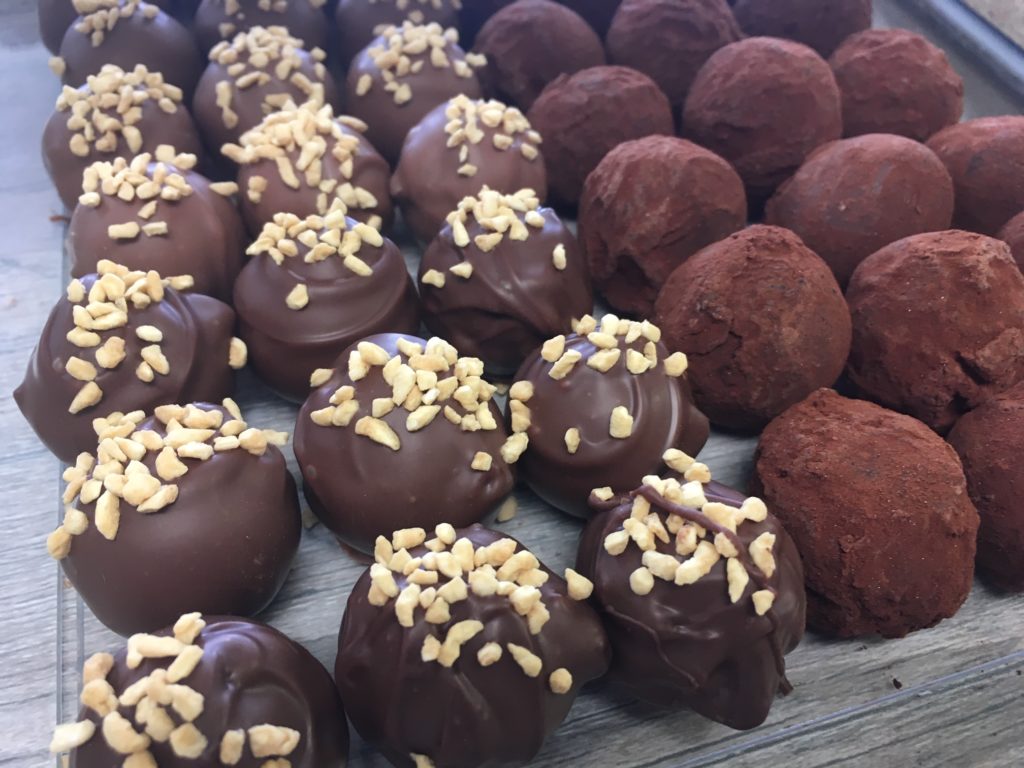 The chocolates are made from scratch.

Jake and Katie have hired six other employees to help them at the shop, including an apprentice, but there’s still not much time to relax. Their lives consist of kids, pastries, and chocolates, not much more.

“Yeah, we’re tired,” Jake says as he prepares to bake yet another pan of croissants. “People come in and say they pray for us to get some sleep.” He laughs.

Katie laughs along with him. She’s weary, too.

But it’s a good type of weariness because they’re both doing what they love and living where they want to live.