A Sculpture Park • Classic Cars for a Cause

Tahquamenon Falls… Pictured Rocks… Kitch-iti-kipi… Lakenenland.  Lakenenland?  Yup.  You can start including Lakenenland on the list of “must see” destinations in the U.P.

This quirky sculpture park hidden among the Chocolay Township scrub pines just a few miles east of Marquette is fast becoming a popular stop on the obligatory trip north of the bridge.  And online mentions are becoming more frequent in the travel chatter world. 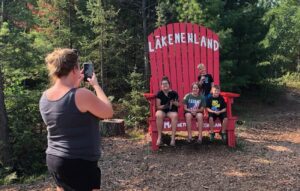 Have you been yet?  If not, you’d never guess there’s a whole gallery out there of impressive sculptures and outbuildings, often with historical notes.  The big welcome sign out front… on the side of an old semi-trailer, innocently undersells the experience of Lakenenland.

You see, undersell pretty much describes the whole place, as well as its creator, Tom Lakenen.  Though self-promotion has taken a back seat to building the park, it hasn’t prevented steady growth over the years.  But good old fashioned word-of-social-media and a lot more traffic on U.P. highways is giving Lakenenland its well-deserved due.  Which… in dollar figures, is next to nothing.

The exception to the rule, Tom Lakenen isn’t in it for the bucks.  “I just want people to come out and enjoy the place.”  As such, though donations are welcome, Lakenenland has no admittance fee and charges for nothing other than what you might find in their modest gift shop.

Refreshing?  Absolutely.  It’s almost unheard of.  But that’s the real deal, as is Tom Lakenen.  As a member of Boilermakers Local 627, Tom knows his way around a hunk of iron and an oxy acetylene torch (whatever that is), but that doesn’t explain the motivation behind building a sculpture park boasting more than 100 pieces, and still growing. 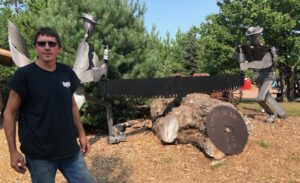 Some two decades ago, Tom, with the “encouragement” of his wife Lisa, decided it was time to makes some life changes… like discontinuing the practice of drinking as many as 30 beers a day.  Everyday.  Unsurprisingly, he suddenly had a lot of extra time and energy on his hands.  As a result, Tom cranked up his tools, hauled in some donated material, and became what he calls, a “junkyard artist.”   In 2003, Lakenenland opened to the public.

Like each individual sculpture, Lakenenland itself is a work in progress.  It may take as little as a couple days to make one of his works of art, or, in the case of more complicated pieces, as much as six months.  Without any real plan for each sculpture or the 37 acre park itself, you might question Tom’s ambition.  But take a walk around the park and you’ll get an answer to that question in a hurry. 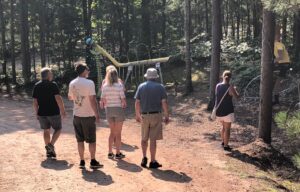 Now, with tourism on the rise and outdoor activities the order of the day, Lakenenland is escaping its “hidden gem” identity and gaining traction among budget conscious visitors, as well as those who just appreciate good art.

Never has, “you get what you pay for,” been less appropriate.  The creativity and sheer challenge of working with the castoff materials that Tom turns into art is truly impressive.  Tom’s mom Pat does most of the painting, but the heavy lifting is all Tom.

When asked, “Have you ever seen anything like this?” most visitors simply say “No” and take another picture.  And then they’ll say something like, “One guy did this?” 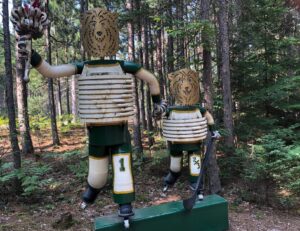 Heard enough?  Because this weekend is a great opportunity to check it out yourself during their annual music festival.  Beginning Friday night and all day Saturday a variety of bands and musical offerings will be performing on the Lakenenland stage, again… free of charge.

They started the music fest a few years ago and it’s become a popular gig for a number of area musicians as well as those who like live, local music.  Event details and the entertainment schedule can be found at Lakenenland Music Fest on Facebook.  Parking may be challenging, so there’s a shuttle running from the Ojibwa Casino from 5pm until midnight Friday and 3pm until midnight on Saturday.

The annual Classic Cars on Third event is back after a Covid pause and this year’s edition, a fundraiser for the Women’s Center, has special meaning to the organizers.  The Dupras gang… Bill, wife Tammy, daughter Jessica Darcy and her husband Kyle, are commemorating the life and tragic death of Tammy’s daughter, Jessica Drummond.  You may remember the awful circumstances of that day…  Thanksgiving 2015.  Jessica and a friend were the victims of the worst kind of domestic violence.

Though it might help prevent future tragedies, we’ll never know the answer to the question… “why?”  The guy who senselessly took two young lives also took his own.

Beneficiary of this year’s donations, the Women’s Center is fully engaged in a battle that too often exists under the radar.  Bring up domestic violence at your next barbecue and you might as well cue the rain clouds.  It’s a hard subject to talk about, much harder to experience.

It’s important to note that with all the progress we’ve made… women are still the more vulnerable of the sexes.  In a faraway land we’re currently witnessing what can happen in a society when respect for the individual, simply because of their gender, is something that can be ignored and abused.  Addressing the problem by building more cemeteries doesn’t cut it.

Women’s Center Executive Director Beth Casady appreciates the effort of the Third Base Bar proprietors.  “It means a lot to Tammy and Bill, Jess and her husband, and their friends, to put this on for the Women’s Center. They know how important our services are, and what a joy it is for them to combine a hobby they love (cars and going to shows) to supporting our services.”

The cars will be on display tomorrow on North Third from 10 to 4.  You’ll be able to donate, bid on silent auction items, and contribute through tips at the Third Base Bar both Friday and Saturday.  For more information visit downtownmarquette.org.