A Doctor with Skin in the Game

Regular viewers of the TLC network may be familiar with the popular real-life medical program, Dr. Pimple Popper.  Since the first episode appeared in July of 2018, the show has developed a following among those who, for a reason unknown to this observer, appreciate the identification and treatment of severe skin disorders.  If you haven’t seen it, it’s pimple popping on steroids.  Save the snacks for later.

Well, the executives at TLC know a good thing when they diagnose it, so it’s natural that more shows dealing with unsightly dermatological disorders would follow.  Enter… Dr. Mercy Odueyungbo, a board-certified dermatologist and fellowship trained Mohs surgeon.

At about the same time Dr. Pimple Popper premiered, Dr. Mercy was opening her own office, Lilly Dermatology, in Chicago.  The talent scouts at TLC discovered Dr. Mercy through her Instagram page and reached out to see if she’d be interested in joining the cast of a new medical show, still in the works.

Even though she is shy by nature, with no aspirations to be a television star, Dr. Mercy felt that contributing to such a show might help motivate people who are reluctant to seek out care.  And being part of an ensemble cast would be do-able, even for an introvert.

Fast forward to the finalization of the show’s content, and the focus changed.  After meeting the attractive and personable Dr. Mercy, producers recognized the potential for another successful show about skin disorders… anchored by an engaging doctor, named Mercy.

You may be wondering… what’s the big deal?  It’s just another show on TLC.  Well, here’s the big deal.  Dr. Mercy is no longer in Chicago.  She’s right here in Marquette! 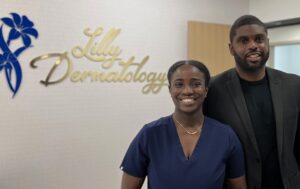 Dr. Mercy met her husband, Tony Jackson, while they both attended the University of Iowa.  Tony, originally from Ypsilanti, went to Iowa as a student-athlete and played football for the Hawkeyes, and it’s apparent his “team” experience has spilled over to Lilly Dermatology.  Dr. Mercy handles the medical side, while Tony, with degrees from both Iowa and Purdue’s Concord Law School, works the business end.

Dr. Mercy completed her residency in New York City and then worked for a time in Chicago, but along with Tony, wanted to find a place a little more peaceful and family-friendly than the country’s biggest cities.

While searching for their landing spot, Dr. Mercy saw an opening in Marquette, Michigan.  A native of Nigeria, her knowledge of Midwest geography was a little shallow, so she asked Tony what he thought about Marquette.

“I assumed he would be able to tell me all about it since he is from Ypsilanti, but I was wrong. When I asked him about Marquette, he said “I’ve never heard of it.”  I had to come see Marquette for myself to know what it was like, and that’s what I did.  I immediately fell in love with the beautiful lakes, the close knit community, and the quality of life.”

The doctor and her husband, and subsequently their two young daughters, have lived here since 2015, but it wasn’t until this last April that Lilly Dermatology opened an office in Marquette, in downtown’s Kaufman Block.  With satellite offices in four other U.P. locations, and still with obligations in Chicago, Dr. Mercy has flown a little under the radar here in Marquette.  A scheduled appearance in U.P. Home Health and Hospice’s Dancing with our Stars, which would have put the affable couple in the public eye, was postponed due to the pandemic.

But all that is changing with the celebrity status that comes from a network television show.  With a focus on her practice, Dr. Mercy downplays her newfound notoriety.  “TV celebrity is a stretch!  I do really enjoy helping people who would otherwise not be treated.  My heart was warmed with each patient we were able to help.”

It’s refreshing to see someone downplay the popularity that comes with nationwide exposure. But here at Word on the Street… we’re going there!  The first season of Dr. Mercy is in the books, but they’ve signed a three-year deal, so we can expect to see new episodes sometime in the near future.  You can find all the Dr. Mercy details at imdb.com.

The first season’s programs were shot in Chicago, but according to Dr. Mercy, going forward, episodes will probably be shot in Marquette.

And what’s this done for business?  According to Dr. Mercy, “The show has not affected Lilly Dermatology that much. Aside from the occasional call or email from someone who watched the show, life before and after Dr. Mercy has been the same.”  Their sparkling new office has room for additional practitioners and a greater patient load, so it’s reasonable to think that once they get another TLC season under their skin, that space might come in handy.

For more information about Lilly Dermatology, visit their website at lillydermmd.com.

Here’s a quick update on Wednesday night’s special meeting of the Marquette City Commission, regarding the future use of city owned property.

During previous discussions regarding the issue of available and affordable housing, it’s been suggested that the city should identify properties that could be dedicated to that effort.  City staff gave a presentation showing all the various parcels that could possibly be part of a plan designed to address the housing issue.

Even though the city owns a fair amount of land, only a modest portion of that lends itself to development, particularly for housing.  Two of those parcels have already seen interest from local developers, while a third, adjacent to Beacon House, was on their wish list.

In all three cases, the city commission turned down the offers made for purchase and instead directed staff to come up with requirements for sale of the properties that would address the issue of workforce housing.

It’s been written here that there’s only so much this city, or any city, can do to impact housing shortages.  What came out of the special session was a sincere effort by commissioners to address the crisis, as much as possible.  It won’t solve the problem, but it’s one step in the right direction.