A Woman Unlike Any Other

“WHAT THE F*** happened?!” Aoy exclaims into her cell phone. Steam rises from the huge pot of soup she’s stirring on the stove.

A mini-crisis has broken out at the Rice Paddy, her restaurant on Presque Isle Street. It’s 10:30 am. Two-hundred eighty pounds of chicken wasn’t delivered on time.

“You better have my chicken, dude!!” she tells the guy on the other end. Then she hangs up. No apparent anger on her face. In fact, the hint of a smile lights up her eyes. “F***ers aren’t doing their job,” she concludes and goes back to her pot of soup.

Aoy (pronounced “Oy”) Lachapelle is an institution in Marquette. There is no one even remotely like her in town. She works six days a week at her little take-out diner, usually 12 hours a day. She flashes a broad-faced smile that wins over strangers from the very first moment. Her coarse mouth may shock you at first, but then you realize she really doesn’t mean it.

And, above all, there’s her good and generous heart that has won her intensely loyal friends and admirers here for the last 30 years.

She’s got a story to tell, but you’ll have to listen while she’s preparing for the onslaught of customers who’ll be phoning in and walking in to the Rice Paddy within the next half hour.

She was born in a suburb of Bangkok 62 years ago and raised mostly by her grandmother and grandfather.

“I never liked school,” she tells you in her strongly accented English. “I’m dyslexic. Books are hard for me to read. Hands-on, I’m fine.”

She pauses to taste the soup, then drops a batch of pasta into boiling water.

“When my family got a wedding invitation in fourth grade, I couldn’t read it,” she continues. “In Thailand, you learn in groups so I’d depend on others and fool the teacher. Homework? I paid my friend to do it….” She smiles. “But when my grandfather found out I couldn’t read, the shit hit the fan. Then my aunt had to tutor me so I could read.”

At 19, her parents arranged for her to be married. She couldn’t handle it.

She left the country. A Thai girlfriend who had immigrated to Washington state urged her to come for a visit. Aoy obtained a 90 day visa and flew to Washington—as in Washington DC. She thought the state and the district were the same place.

“I showed the security guard at the DC airport my girlfriend’s address,” Aoy explains, “and said I wanted to take a taxi there. He told me that would take three days.” She laughs. “So I got on a plane and flew to Washington.”

“Yeah, this your bitch at the Rice Paddy!” she says. “Where my chicken?…..How many you have?….They on sale?….” Now she’s smiling broadly. “….I get any for free?…Okay.” She hangs up. Crisis averted. She’s getting her chicken. Her supplier still loves her and is giving her a good deal.

Back to the story.

Aoy arrived in Washington as a teenager, liked what she saw, but her visa was running out.

Fate intervened and introduced her to an Air Force officer. A week later, Aoy was married. She knew what she wanted and she got it.

The marriage lasted 17 years and produced one daughter who now lives in Wisconsin. Aoy concedes that the marriage was not exactly brimming over with love, but she tried to play the good wife.

The problem was, she wasn’t satisfied with that. She wanted more out of life. Above all, she wanted to open her own restaurant in Marquette. So Aoy and a partner rented the little building on Presque Isle, and Aoy worked three jobs–cooking at another restaurant, teaching cooking classes, and cleaning homes–to save up for the new restaurant’s kitchen equipment. 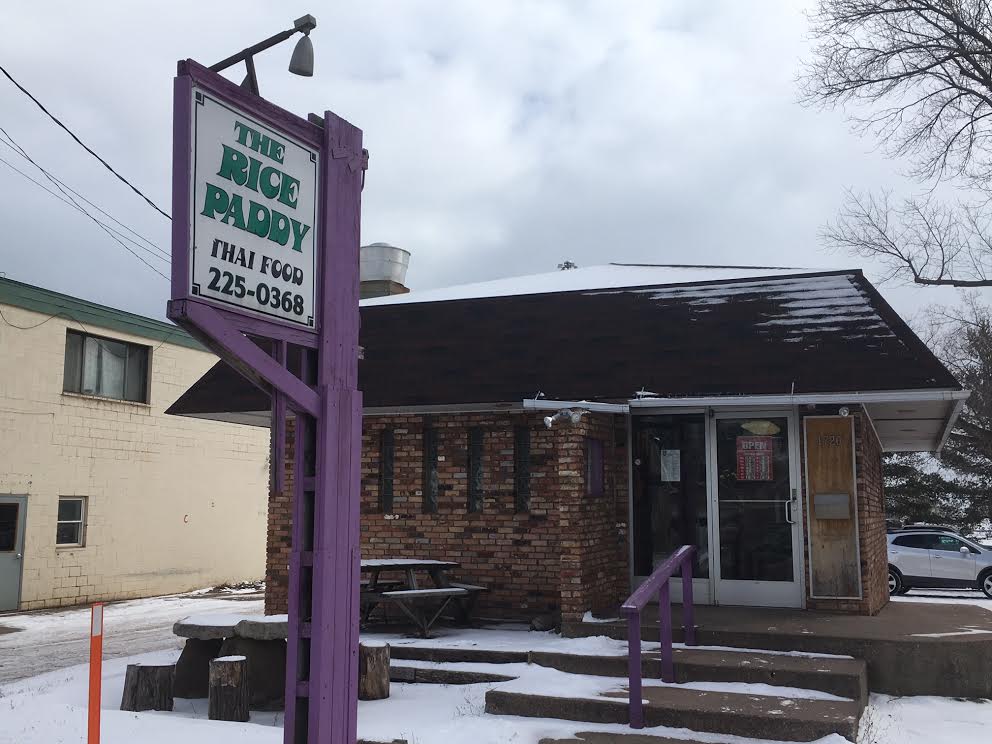 “My husband said I’d be out of business in three months,” she says with a sense of satisfaction. “I’m very determined and do everything on my own.”

“F*** you, Trump!” she exclaims, as she tosses chopped chicken into one of her pans. “I make this country!” Again, that big, broad smile.

She is the classic immigrant story. Determined. Hard-working. Saving every penny, investing carefully.

The Rice Paddy is her pride and joy. There’s nothing fancy about it–a cramped kitchen, a stove with four gas burners and a deep fryer, a 15′ by 15′ waiting room for customers along with ten stools and a long shelf attached to the wall for those who want to eat in. But most are take-out customers.

But there are so many others–doctors, lawyers, journalists, office workers, other restaurateurs, hordes of students, and street people.

“I want everybody who walks in here with $10 to walk out of here with enough food for two people,” she tells you. “Good food, lots of food. And if people come in here with no money, no problem. I feed them.”

The bell at the front door rings. The first customer of the day.

“What you want, boyfriend?” she asks immediately. Then she recognizes him. “Where you been, asshole? I haven’t seen you!”

Her customer sheepishly explains his absence, then orders won tons and an egg roll

For years, Aoy operated the restaurant as a one-woman band, with only her current husband, Greg Trick, helping out in the morning before the Rice Paddy opened.

“I don’t know how she does it,” Trick says. “She does the work of ten people.”

She finally broke down and hired one other employee, Josh Glomb, a few years ago. And Sheriff Zyburt, a longtime, dear friend of hers, occasionally comes in during his off hours, rolls up his sleeves, helps prep the food, and mops the floors.

Such is the loyalty her friends feel toward her.

But she’s intensely private away from her restaurant, mostly spending time with Trick and entertaining only occasionally with dinner parties. Her network of friends away from the Rice Paddy is purposely small and limited.

The words mean nothing. What matters is her good heart. Every two years she and Greg return to her hometown in Thailand with gifts of clothes and food for all the children in school. A way of giving back and sharing some of her good fortune from her adopted country.

They met back in 1991 when the young, handsome, soft-spoken TV anchor first came to town. He became a steady customer, then a friend, then a romantic interest. 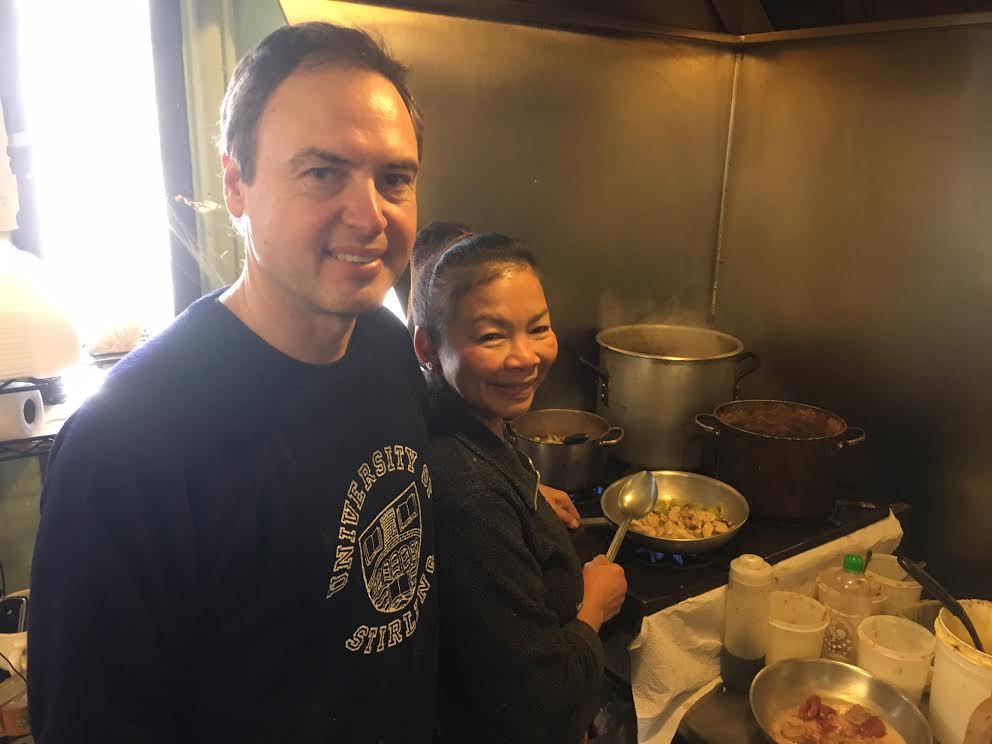 “I had never met anyone like her before,” he says. “She’s a unique person. So hardworking, totally honest, and she’s good to me. I guess that’s the biggest thing–she’s always been good to me.”

Problem was, he was several years younger than Aoy, he had visions of starting a family and Aoy did not, and he also wanted to advance his professional career, which meant he would have to leave Marquette.

She didn’t plead with him, she didn’t demand, she didn’t cling to him. The decision would be entirely his.

He made it: “I decided I could never walk away from Aoy,” he says.

They finally got married in 2009. “That is a good man,” Aoy says of her husband when he’s out of earshot. “He is a really good man.”

The bell rings again. The second customer of the day.

“What you want, girlfriend?” Aoy asks her.

“Pad Thai and egg roll? Almost ready, girlfriend. How you been?”

The noon rush is starting. People arriving hungry and leaving with a bagful of Thai and Chinese delights. The aroma–of garlic, ginger, curry, anise–hits you as soon as you walk  in the door. Good-natured, occasionally coarse banter between her and her customers continues all day long, into the night.

“I love cooking for them,” Aoy tells you as she sprinkles Thai basil into a curry dish. “I love these people. I don’t know if I’ll ever retire. I love my job.”