Anatomy of a Business Failure

TWENTY-EIGHT-YEAR-old Klint Miller looks you straight in the eye from across his desk at UP General Contracting in downtown Marquette. He’s ready for questions.

He’s just shut down his business after less than four years. A locked door, employees let go, building contracts unfulfilled, debts unpaid, some of them unpayable.

But he’s not running and hiding. He’s forthcoming, well-spoken, earnest, downcast, and chastened by what he’s just experienced.

A local boy, he started in construction as a 13-year-old, had success, and then in 2016, only in his mid-twenties, he was ready to start his own business, UPGC, out of his home. A young man on the rise.

In 2017, he found the resources to move his growing company to an office on Washington Street.

UPGC did almost $4 million in business in 2018. The company had up to 20 employees at one point. Not only that, but Remodeling Magazine that year selected UPGC as one of the “Remodeling Big50”–an award for its standards of professionalism and integrity.

Everything seemed perfect except…

“It came to my attention that we had a problem with finances,” he says. “We’d lost some control of our accounts receivables, we had a cash flow problem.”

Who exactly was responsible for the problem? He won’t name names, and he admits, as CEO, he had to take responsibility and try to remedy the situation. 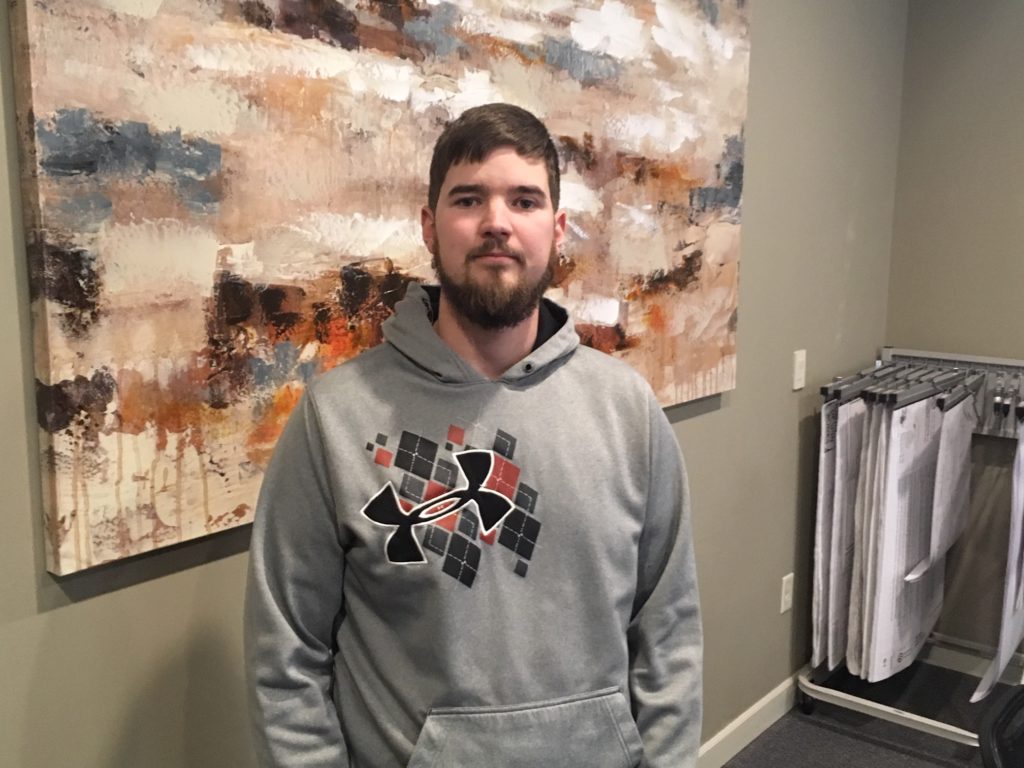 Klint Miller was riding high as a young business owner, but then things went south.

“I thought I could fix it,” he says. “I took out some high interest loans but things began to snowball. Some projects weren’t as profitable as we expected, and then some of our clients started buying their own materials because they weren’t happy with us.”

“To make our home livable, we had to take out a second mortgage to pay his subcontractors for fear of liens,” a Gwinn homeowner explains. She didn’t want to be publicly identified pending possible legal action. “He (Miller) walked away with $70,000 of our money, and our home and garage have still not been inspected and sided to completion.”

“We kept giving them money and only minimal work was being done,” says Jennifer Risch of Wisconsin. She and her husband hired UPGC to build a high end log cabin in Alger County. They finally gave up on the company and hired another contractor. “We’ve literally cried on the phone with other customers (of UPGC) who went through the same experience.”

Both Risch and the Gwinn homeowner say there are several other UPGC clients with the same story–cash handed over to the company, jobs not done or done negligently…resulting in frustration, anger, and a loss of hard-earned money. Lawsuits are being discussed.

And then this, from Alger County building inspector Joe Cilc who’s inspected some of the UPGC homes: “They (UPGC) have had problems all along with construction and with permitting. I’m not sure they knew what they were doing.”

Miller, clear-eyed and soft-spoken, says he understands his customers’ frustrations.

“I hate the situation I left these people in,” he tells you quietly. “But there’s nothing I can do because I don’t have any money. I hope these people (the customers) have some grace in their hearts.”

He and his wife have signed over their home as collateral for the loans, they’ve maxed out their credit cards.

And…they have five children at home. His wife is a stay-at-home mom.

An uncertain future, to say the least, for the Miller family, as Klint goes through the process of dissolving the company and liquidating the assets. He tells you he’s also doing his best to try to link up his unhappy customers with contractors who might be able to finish the job. But of course, that will come at additional cost to them.

And so, as we finish the conversation with Miller, we ask, “What have you learned through this experience? What would you do differently?”

“I would start out smaller and I would be more careful hiring people,” he replies.

But of course, the ultimate responsibility lies with him. He started the company, he hired his employees, he assured his customers he’d get the job done, he took their money.

The arrogance of youth? Unchecked ambition? Naivete? Negligence? A touch of greed?

Perhaps all of them.

And at the end, what remains are angry customers, unemployed workers, a broken young man and his family, and a locked door to a failed business.