Another FUNdraiser • Coffee with Cambensy • Happenings

FUNdraising for a Playground for All

We are well into the age of the FUNdraiser… the event-driven vehicle of choice for non-profits and service groups looking to raise money for their cause, whatever that might be.  Of course, many still just send out the occasional appeal letter with a return envelope, but where’s the excitement in that?

Using community events to raise money is the best thing that ever happened to fun-loving philanthropists.  From golfing with celebrities to dancing with local stars… and a checkbook full of other creative events, giving back now means a full social calendar.

Another one was announced yesterday in the shadow of the Kids Cove playground in downtown’s Mattson Park.  A gang of four local do-gooders, headed up by Stephanie Jones, announced plans for the inaugural Honor Credit Union Full Meter-Thon, a fundraiser for the new Kids Cove, destined to replace the current structure. 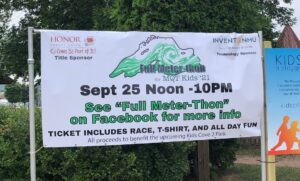 What’s a Full Meter-Thon you ask?  It’s just what it says.  Participants will have to navigate, by running or walking, or rolling or sliding or jumping or whatever… one full meter.  “I’ve had the Meter-Thon idea for years but never knew where it would do the best until Marquette needed help to raise money for Kids Cove,” says Jones.

Familiar names fill out the organizing committee with Kate Havel, Bill Digneit, and Rick Rhoades lending their time… and influence.  We’ll see if any of them are willing to take on the 39-inch course, or if they’re just satisfied with being behind another cool event in Marquette. 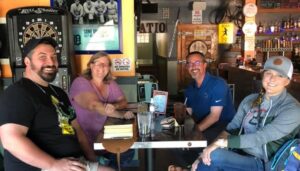 So what are the deets on this new Kids Cove?  Listening to the gaggle of youngsters enjoying the existing playground, it’s not readily apparent that we need a new one.  But a closer look, and professional evaluation, says the original Kids Cove, built in 1996, is ready for replacement.

The price tag?  The dollar figure that the Full Meter-Thon will be contributing to?  Well, there’s a $300,000 Michigan Natural Resources Trust Fund Grant on the table that has to be matched with local bucks, so we’re talking at least six hundred grand.  And Playgrounds for All committee chairperson Nheena Weyer Ittner indicates it could go bigger, depending on the final design… and dollars donated.

With particular emphasis on building an inclusive playground destination for kids of all abilities, a simple slide and monkey bars won’t do.  “We want all of our kids to have every opportunity,” says Weyer Ittner.  And that’s not just kiddie talk.   Nheena was the driving force behind the skate park by the Y and of course the Upper Peninsula Children’s Museum, where she’s the executive director.

There’s about $75,000 already in the playground coffers from a previous effort that never came to fruition.  And Digneit thinks $50,000 could be a reasonable goal for the Full Meter-Thon.  Though the final cost could approach seven figures, Weyer Ittner thinks the community will get behind this just like they have for other important projects.  I wouldn’t bet against her. 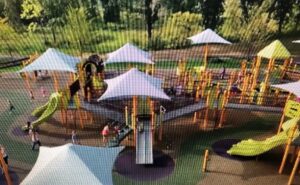 It’s just a couple months away, so you might want to start training.  And by training, we mean putting some dough aside for the kids.

State Representative Sara Cambensy held a couple of informal, informational meetings in Marquette and Ishpeming this week.  We were in attendance at the Coffee Hour in Marquette and came away with the following impressions…

For one thing… bring your own coffee.  Which we did.

Cambensy, with three staffers in tow, gave a brief summary of current issues being worked on in Lansing.  She then opened up the floor to her constituents in attendance, numbering about 20.    As you might expect there were a couple with very specific issues that Cambensy showed interest in, but suggested a contact with her office subsequent to the meeting would be more productive.

Other than that, most of the assembled citizens were there to express their opposition to the rocket launch site being proposed by the Michigan Aeronautics Manufacturers Association (MAMA) for the Granot Loma property on CR-550, on the way to Big Bay. 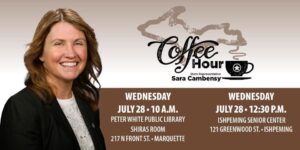 Recognizing the tone of the meeting, Cambensy assured the gathering that she is not a decision-maker on this issue and has no voice or vote on the project going forward.  That did not, however, discourage interested attendees from sharing their views.

Though there’s an organization called Citizens for a Safe & Clean Lake Superior already operational and mounting a campaign against the project, not everyone was aware of its existence and still felt the need to let their particular opposition be known.  (Note-  When someone prefaces their remarks with “to make a long story short,” it won’t be.)

Although Cambensy made her involvement, or lack thereof, very clear, it was noted by one commenter that she is still an “influencer” and should represent the views of the people in her district.  In response, one of her aids indicated that calls and letters to their office were fairly well split, both for and against.

It was also noted that she was with the group of officials standing on the County Courthouse steps when the Granot Loma plan was announced a year ago, and that she had made comments in support of it.  She responded by saying that she generally supports responsible projects that may provide good jobs, particularly those that don’t require government assistance.

There are still many hurdles for the Spaceport advocates, not the least of which is a very passionate group of local opponents.  But it appears the MAMA folks are as equally committed.  We’ll be keeping an eye on this for further developments.

This weekend, Marquette Legion Baseball and Travel Marquette host the 2021 Michigan Legion Class A State Baseball Tournament at Gerard Haley Field at the north Marquette complex.  Games are scheduled throughout the weekend until the finals on Sunday.  It’s good baseball, and if you haven’t seen the upgraded facility, you’ll be impressed. 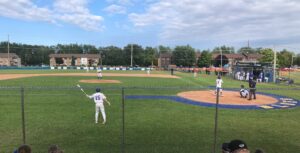 After a year off, last weekend’s Outback Art Fair at Marquette’s Picnic Rocks came back strong.  According to event organizer Cindy Engle, many of the artists told her, “best sales ever.”  Regardless of outside influences, Marquette’s art community continues to roll.