It’s something new that the new management is trying this summer–biking from 3-8 pm on Thursdays and Friday, and then two sessions, 10:30 am to 3 pm and 3-8 pm on Saturdays. Official opening day? This coming Thursday.

How’s it work? A shuttle bus with a bike trailer takes you to the top, and then you choose one of five trails to the bottom. Get back in the shuttle and do it all over again. Six hundred fifty feet of elevation drop. Expert trails and intermediate trails.

The cost per session is $29 a rider. A maximum of 30-35 riders per session so the trails don’t become congested.

The Mountain’s not expecting to make a ton of money on this.

“The important thing is we want to keep our key employees working throughout the year,” says Andrew Farron who was named the GM midway through the last skiing season. “And we also want to keep the energy going on the Mountain.”

Farron’s hoping the staff can also start working on a beginners’ trail to introduce more of us to mountain biking.

Now, about this last skiing season, the tumultuous one that featured the firing of one GM and the hiring of another, along with numerous equipment breakdowns, a near revolt of veteran skiers and snowboarders, and sometimes uncooperative weather. 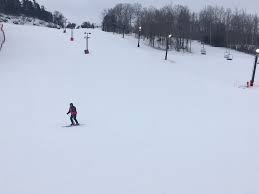 Last season was barely profitable, according to GM Andrew Farron

“The welcome I received from the community was overwhelming,” he says. “I honestly didn’t deserve it because I wasn’t from around here, but people couldn’t have been nicer.”

The season was a big money-loser, right? No, Farron says, despite all the controversy and adversity, they actually turned a slight profit for the season. Encouraging.

Even more encouraging–Marquette Mountain has just purchased a brand new pump station that should help prevent all the maddening equipment breakdowns that plagued last season.

Hope on the Mountain, and now biking, as well.