BOB MAHANEY, THE president of the Veridea Group, gazes out the window of his third floor office in the mBank building and feels a sense of satisfaction.

“You know, we developed this property when it was the old Bunny Bread building,” he says. “The roof had caved in, a thousand pigeons were living inside, and the building caught fire twice. And all along this West Washington Street corridor, there hadn’t been a new capital investment in something like thirty years.” He’s not one to boast but this, he feels, is important. “Now I look outside this window and I can see at least nine new projects, and that doesn’t include the new hospital.” 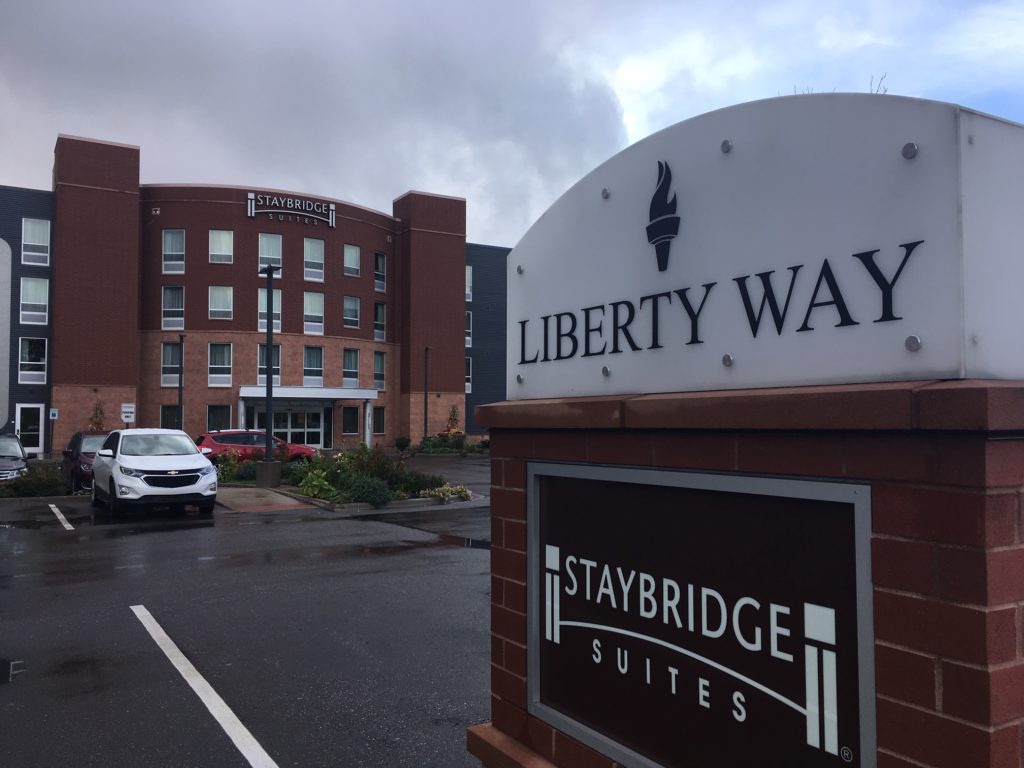 Mahaney, a soft-spoken and unassuming man, is Marquette’s best-known and most prolific developer. Veridea has a long and impressive portfolio of property acquisition, development and ownership: Liberty Way on West Washington Street, Country Inn and Suites and Buffalo Wild Wings on US 41, the WJMN Plaza just off of 41, the Harbor Hills development off of McClellan, the Harbor Vista apartment complex south of downtown, the strip mall on US 41 with Wells Fargo and Kay Jewelers, five other hotels in Michigan and Montana, and more.

With more on the way. Veridea, which officially started less than a decade ago but has been in the works since the Nineties, now employs 200 people and enjoys a sterling reputation for building handsome and financially sound developments.

So how’d it all happen?

Mahaney was born and raised downstate, then educated at Albion College and Thunderbird School of Global Management in Arizona. It looked like his future would be in accounting.

“That’s how I started,” he chuckles. “I call myself a recovering accountant.”

He worked as an accountant in Marquette after college, then took other jobs in the Midwest, met his future wife and fellow accountant Mary (from Bessemer) along the way, and then they returned to the U.P. 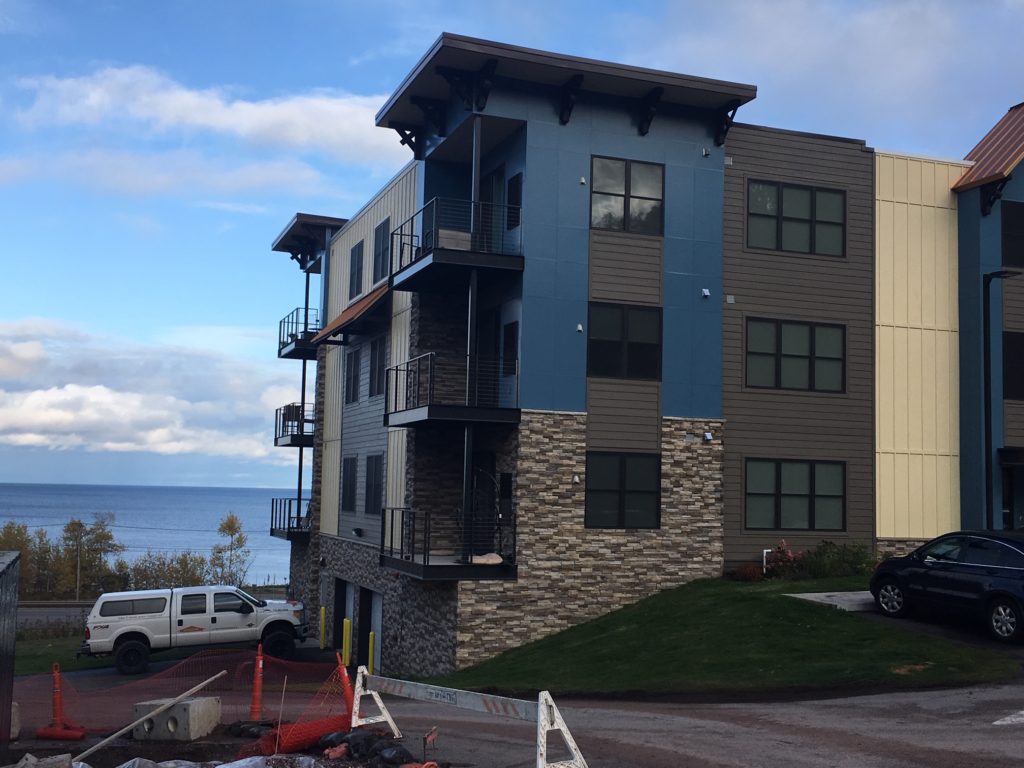 Veridea is now constructing the second phase of the Harbor Vista apartments south of downtown Marquette.

“We wanted to move back to the area to start a family, and she got a job at Marquette General Hospital in the accounting department. So I needed something to do,” he says.

And it wasn’t going to be in accounting.

Instead, he acquired franchise rights to Blockbuster Video in the U.P.–Marquette, Escanaba, and Houghton. That was a start, but the problem was, he owned the business, but not the property, in Marqurette.

“It’s a lot of long hours working in retail,” he says. “And I realized that the gentleman who owned the property was probably making more money on it than I was, and he never had to be there!”

So he and Mary sold the Blockbuster franchises in the mid Nineties, took the proceeds and began investing in commercial real estate. Their first acquisition was the 925 Washington building (next door to mBank). It was a former auto dealership that was vacant and rundown. They converted it to office space, leased it out, and began making money. As property owners.

Then followed the spate of other acquisitions and development projects, and the formation of Veridea with Bob as president and CEO and Mary as CFO and COO. Over the last decade, Veridea has changed the landscape of Marquette, and even larger, more ambitious projects lie ahead.

First, there’s the planned mixed use development across the street from the Commons. Five stories, with office space on the upper floors, and food and retail outlets on the ground floor. 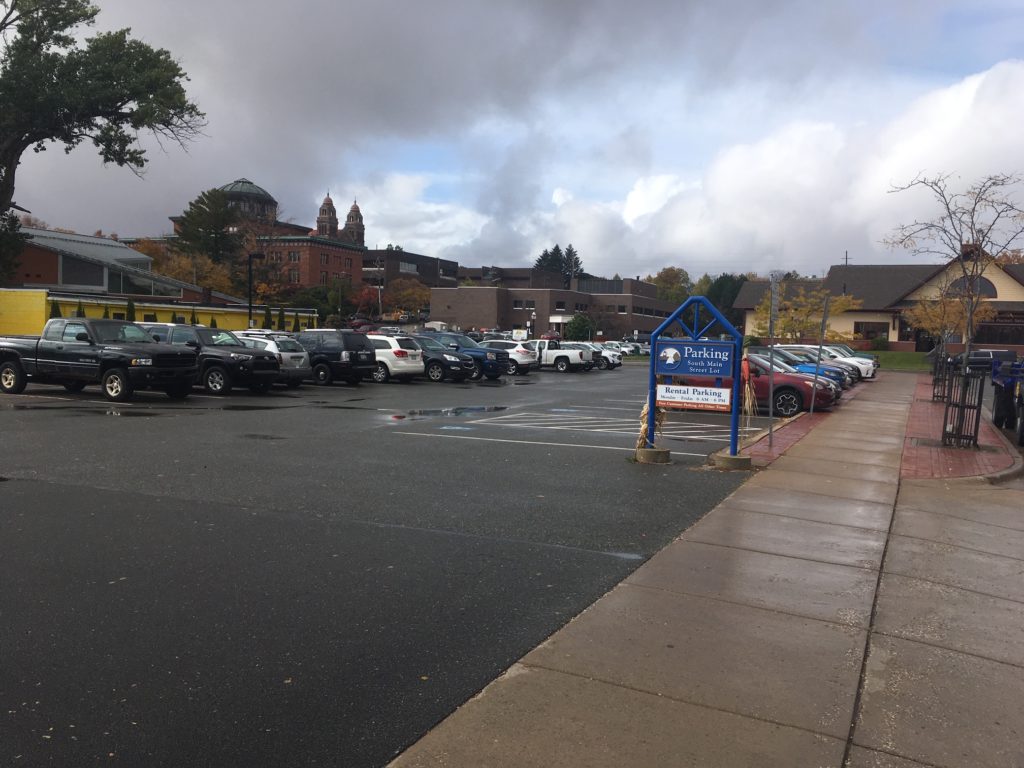 The parking lot across from the Commons will become a five story mixed use development.

“We want this to be a public-friendly space because of its location,” he explains. “We want to invite the public inside.” Plans would likely involve a restaurant, maybe a food court-type atmosphere. “We’ve actually toyed around with creating a food truck environment inside that would be year-round. It’d be really challenging from a Health Department standpoint but we’re looking at it. We’ve also thought of working with the NMU culinary arts program in the building.”

Plans are uncertain, but Veridea expects to break ground next year.

Then there’s the Cliffs-Dow tract near the lakeshore. Twenty six acres of brownfield property that the city would like to sell to Veridea, but the deal hasn’t closed yet. It likely won’t close for another six months while Veridea does its due diligence, comes up with a design, and completes negotiations with the city.

“Our hope is to have a really diverse housing mix out there,” Mahaney says. “Some high end, some condos, some rentals, a lot of it will be multi-family, and we’re taking a serious look at some senior housing mix. And we’re going to try to get some entry level housing in there.”

Ambitious and promising, but by no means a done deal.

Mahaney knows well the difference between plans and done deals.

Consider the recently collapsed deal to buy the old hospital property. City officials and most residents celebrated when Veridea announced it wanted to buy the property and convert it to a mixed used development–residential, retail, offices, public space. Perfect.

Except it wasn’t. “Our plan called for the re-use of of several of the major buildings,” Mahaney says, “but we weren’t able to do any due diligence beforehand. We couldn’t even take a tour of the buildings before signing the purchase agreement. Those were just the rules of engagement that Lifepoint required us to follow.” 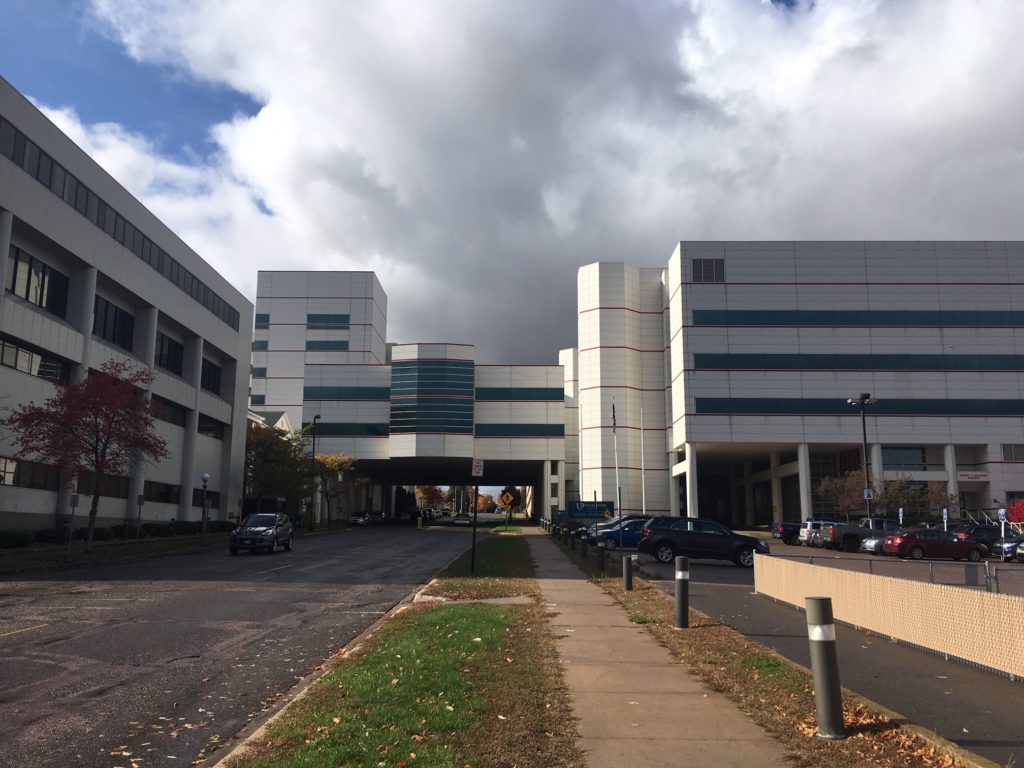 Veridea had planned to buy and develop the old hospital site but then had to back out of the deal.

Turns out, Verdiea decided they couldn’t repurpose those buildings in a cost effective manner. They went back to the drawing board, entered negotiations with Lifepoint again, but couldn’t reach agreement. “That was a hard decision for us,” Mahaney says, choosing his words carefully. “We felt like we were letting the community down, but you’ve got to have two willing partners at the table.”

Is there a chance for re-negotiation, especially considering how important that property is to the future of Marquette?

“We’d be open to exploring it if they came back,” he tells you, “but we’re not actively engaged at this time.”

But even without it, Veridea still has more than enough on its plate–at least five ongoing development projects, and others in the works. One of them is a $50 million planned revitalization of Houghton’s waterfront.

Bob Mahaney, the accountant-turned-Blockbuster-owner-turned-developer, will have no trouble staying busy. And thankfully, he won’t have to spend any time in a retail shop selling and renting videos.