It’s always more fun to talk about what’s coming, rather than what’s going.  But it seems there’s always a little bit of both.  And that’s true today, as we take a look at recent developments, both comings and goings, that will shape the days ahead.

• You may have already heard about the new development proposed for Marquette Township.  It seems a popular restaurant chain will be establishing residency near the Fraco Concrete Products store on U.S. 41.  No, it’s not Olive Garden.  For some reason, the name of the business was not allowed to be uttered at the township meeting where the proposal was presented, but, and by now it’s no secret… Panera Bread is coming to town!

That exclamation point is a reaction to the intense social media response to the Panera Bread news.  Comments, and there have been plenty of them, ranged from unbridled enthusiasm to… meh.

Another restaurant?  Do we really need that?  I love Panera Bread!  A national chain?  Let’s support our locally owned and operated places instead.  Panera Bread is too expensive.  No, it’s not.  Yes, it is. It’s too much bread.  Bread is in its name!

The thought here is that there’s nothing wrong with another restaurant.  If they think they can make it in Marquette, more power to ‘em.  And though it’s a national chain, there may be some local ownership, and there will certainly be local employment… if they can find workers.

A new restaurant?  When that’s your big news story of the day, be thankful.

• We’re finally seeing action at the old Marquette Mall site.  The area is being prepped… for something.  The property has been divided into several separate lots by the owner, and when some new utility work has been completed, building can begin.

You may recall some months ago it was rumored that First Bank was going to be building there.  Apparently, they’ve let their proposed site plan expire, so that’s not happening… at least not right away.  Word is that it’s O’Reilly Auto Parts that will be opening a store there.  Didn’t they just open a store in Harvey?  Yup.  Just like banks and pot stores and coffee shops, you’d think we have enough of them.  But, as it turns out, it’s not up to us do decide when we have enough of something.  Again, it’s nice to have someone investing in our community.

• Did someone mention coffee shops?  Yup to that… and here’s another one.  Soon to open on the first floor of One Marquette Place is Provisions, a new cafe that will surely be a welcomed addition to that booming stretch of condos and apartments lining Lakeshore Boulevard. 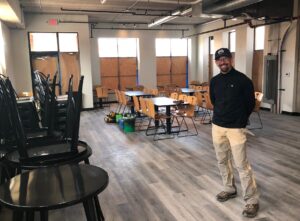 Owner Jesse Renfors has returned to the area after a stint out west and he brings with him a wealth of coffee shop experience. Leaning on that, Jesse and his wife plan on creating a space to accommodate a full service coffee and espresso bar, with a sampling of treats from local bakeries and vendors.

Renfors says Provisions will also offer fun, informational things… like cooking classes.  “We want to bring food back to the focus of our lives.  We’ll provide the tools, education, and excitement to help you create special dishes in your home for your friends and family.  And, our cafe is large enough to accommodate guests for extended periods, allowing for remote work and meetings.”

Just off the bike path with plenty of indoor and outdoor seating, and right by the new pier project, Provisions appears to be perfectly situated to take advantage of the caffeine-crazed coffee crowd.  Look for their opening in early May.

• Been wondering where you’re going to get your next IV?  Freshcoast Wellness Company might have what you’re looking for.  They just celebrated their Grand Opening in the Watermarq Suites building on South Front.

Owners Lacy and Eric Williams and Julie Kab think Marquette is ready for this relatively new therapy.  We’ve been taking our one-a-days for years now, but direct injections, for those not opposed to the occasional needle, might be a step up from your current regimen.

Lacy believes the pandemic has encouraged people to take another look at how to best get, and stay, healthy, and that the time is right for IV vitamin therapy.  Other than the jab, probably can’t hurt none. 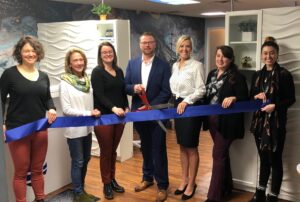 Treatments are typically monthly, but can vary depending on one’s individual needs.  To find out more, visit their website at freshcoastwellness.com.

• And this just in… we hear that the former Best Buy building in Marquette Township has been bought by someone, possibly from Kingsford, who might be planning something to do with sporting goods. No confirmation yet, but our source on this has been pretty reliable in the past. 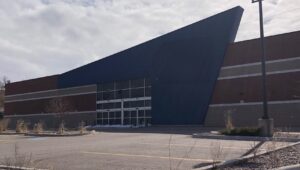 The empty Best Buy building… soon to be occupied?

It would be great to see something go in there.  It’s a nice building with pretty easy access.  And whatever it ends up being, it’s better than an empty building.

• After two and a half years at the helm of Marquette’s Downtown Development Authority, Becky Finco is leaving the position and relocating with husband Ted to Green Bay.  (Ted has been the manager at Marquette’s Gordon’s Food Service for more than twenty years and he’s leaving that position to take advantage of a career advancement opportunity with GFS.)

Most of the good stuff that happens downtown starts behind the scenes, and that’s where Becky has been for the past 13 years, working as Mona Lang’s assistant, and then taking over the executive director’s job in October of 2019. 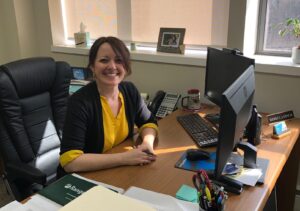 Becky Finco, enjoying her last days at the DDA

Her welcome to the gig was the pandemic, but, while crediting all the various stakeholders, Becky says they weathered the storm quite well.  “It was a true testament to the power of community to emerge from the pandemic with minimal business closures… and continued public and private investment.”

A testament to Becky as well.  Filling Mona’s shoes wasn’t going to be easy, but it looks like it’s been a job well done.  (Maybe she can show those Green Bay folks a thing or two.)

DDA Board member Jermey Ottaway says, “She is responsible for so many of the wonderful events and improvements we’ve made as a downtown over the years.  It will be extremely hard to find anyone to match her drive, her passion for downtown and her expertise in the workings of municipal government.”

And this, from Becky… “On a personal note, I’d like to express my appreciation to the downtown community and those with whom I’ve been fortunate to work over the years. It’s difficult to say goodbye to a community I’ve called home for nearly 30 years and one that I’ve dedicated my career to promoting. Marquette, and downtown in particular, is truly a remarkable community that will always hold a special place in my heart. With warmest regards, I wish you nothing but the best, Marquette.”

• Nheena.  Kind of like Rhianna and Madonna, all we need to hear is her first name and we all know who we’re talking about.  Though best known as the force behind the Upper Peninsula Children’s Museum, Nheena Weyer Ittner’s influence can be found pretty much anywhere you’ll find our community’s youth.

With the Children’s Museum well-positioned to continue its mission, Nheena has announced that she’ll be leaving her post in the corner office by the end of the year.  But here’s what you need to know.  She’s not quitting.  If you know Nheena, you know… she doesn’t quit anything.  According to her, she’s “just gently moving on.”

Where?  “I honestly don’t have a clue,” she says. “I’ve always led my life by the advice of ‘look as far ahead of you as you can and go in that direction, once you get there the next direction will be much clearer to you.’  I am sure opportunities for new adventures will be robust.” 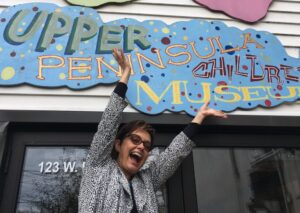 In addition to spearheading the development of the bike corral by the Y, she is currently involved in the new all-inclusive park project at the lower harbor.  And who knows what else?  Whatever it is, with Nheena on board, it’s sure to be robust.

UPCM Board President Patrick Callahan says this about Nheena… “We talk about the museum and the countless programs she’s been a part of, but many of the children who grew up with the museum are now established leaders in the community.  She is a huge reason for that.”

And this, from Nheena… “I’ve been so lucky to have the life that was opened up to me because of the Museum. Lucky for all the amazing people I’ve been able to meet and work with through the years! But most of all I feel proud of the positive impact the museum has had on little families. It has been an honor!  The community has been so kind to me, I am forever grateful!”