We’ve been down this road before.  In fact, this very same road… Lakeshore Boulevard.  Development proposals along that popular drive always get the dreaded “added scrutiny,” don’t they?  Build a barn off Wright Street?  No problem.  Condos on Lakeshore?  Who said they could do that?

When this new development was announced last week, the social media protestations were in full flight.  It’s the perfect subject for keyboard outrage.  The project calls for eight four-story structures built on the parcel of land bordered by Hawley Street to the south, and Lakeshore Boulevard to the east.  Entry will be off Hawley, but as far as interested observers are concerned, this is a lakeshore development.

The property in question is currently owned by Michelle Butler, but the condo project is being developed by an entity called The Sabre Group.  Getting the project to shovel-ready is a multi-step process which includes, but is certainly not limited to, the review and approval of the city’s Planning Commission, which was granted at last Tuesday’s commission meeting, and the pending sale of the property to The Sabre Group. 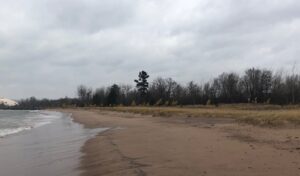 Across the street is the site of the proposed project, on the west side of Lakeshore Boulevard.

But don’t look for a ribbon-cutting anytime too soon.  This deal has already been in the works for eight years.  Eight years!  Complications include the usual red tape, but even more so, wetland mitigation challenges, too labyrinthine to explain here.  Though a walk through the property would suggest it’s pretty much dry land, state regulators define wetlands based on potential high-water marks.  Deeming it wetlands further complicates this particular process, due in part to the vagaries of the owner/developer relationship.

And that brings us to the apparent ongoing dispute and subsequent lawsuit regarding the purchase agreement between the property owner and the developer, which will presumably continue to hold things up until it’s settled, either in another eight years, or maybe tonight, who knows?

You could almost copy and paste the comment threads from previous social media posts:  We’re losing our open land… the condos are only for the wealthy… more congestion along the lakeshore, not to mention… this isn’t affordable housing!  And then there’s the anguished, Marquette’s changing, I don’t even recognize it anymore!

Fortunately, social media doesn’t dictate most decision-making.  Those who spoke out at the meeting expressed legitimate concerns representing both emotional and environmental aspects of such a development.  And interestingly, the opposition isn’t just long-timers who “like things the way they were.”  Young people, and others who have recently discovered Marquette, aren’t too excited about some of these changes either.

So, to the Nays, who are probably going to lose this one, we say, yes, Marquette is changing.  As was pointed out during the meeting, if you want to have influence on those changes, you can apply to serve on one of our many advisory boards, or run for city commission.  Impassioned Facebook comments might be self-satisfying, but they have zero impact on the city’s future.  An actual vote, on the record, does.

Support for projects like this usually isn’t expressed in full-throated cheerleading, but rather it’s given quietly, often by simply not opposing the plan.  The beneficial tax implications can’t be argued, and the fact that someone is willing to invest in our area, should be viewed as a good thing.  But even those who recognize value in the project would probably admit that life could go on without another big development along the lake.

The expression of opinions on issues of importance, regardless of the platform, is always important.  Regrettably, in this case, the fact that this is a privately funded project on private property means that opinions both for and against don’t really carry much weight.

According to City Planner Dave Stensaas, in his instruction to the Planning Commission, state law requires that approval of the site plan had to be based on whether or not the project met all of the city’s zoning and land use requirements, which the majority of commissioners agreed it did.

There were questions about some of the project’s details, and concern about late additions to the proposal, which didn’t give commissioners much time for review, but it was accepted that those details and additions could be managed by city staff.  So, to the disappointment of the dozen or so folks who showed up at the meeting to express their opposition, the proposal was approved.

Which begs the observation… while hundreds of people commented on social media decrying the prospect of more lakeshore condos, only a few actually showed up at the meeting to voice their opposition.  Those who did speak out were passionate and sincere in their concern for the future of their community, but this was going to be a hard project to stop, particularly when it checked all the regulatory boxes. 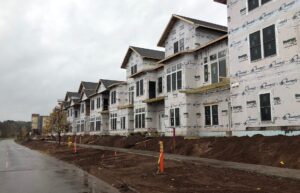 The concern for affordable housing is genuine and well-founded.  But these condos, along with others going up along Lakeshore, priced in the hundreds of thousands of dollars, aren’t the problem.  Granted, they aren’t the solution either, but it’s not impossible for us to do two things at once.  While new development continues along the lakeshore, there’s an Ad Hoc Housing Committee working on the affordable housing dilemma.  City Commissioner Evan Bonsall is the force behind that.  Cooperation and input from the community will be essential to help make something happen there.

One might think that more housing, high-end or otherwise, would help keep costs competitive.  Adequate inventory usually tempers pricing.  But these days, new development, selling for big dollars, somehow gives owners of established properties license to up their rates, too.  File it under… everything is more expensive, with no end in sight.

One thing we can say for sure… more condos are on the way.  The lakeshore you once knew is different than it used to be, and will never be the same again. 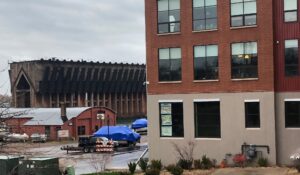 The view has changed over the years. Better for some, not so much for others.

Sure, there’s a beautiful harbor park where an industrial coal-unloading facility once operated, but there’s also view-blocking condos where empty fuel storage tanks once stood.  Change isn’t always going to be exactly what each of us wants, but at least it’s going to be what somebody wants… like it or not.