Looks like a nice park down there in South Marquette.  New playground equipment, fresh landscaping, a refurbished basketball court … ready to go for the kids’ first day of summer vacation.

There’s just one catch.  It still has to pass inspection.  Yup.  An inspector, who apparently lives somewhere up the road, has to come to Marquette and take a look at the work and declare it safe for use by our young’uns.  And, also apparently, he was scheduled to make the inspection a couple days ago, but didn’t make it to town.

So, for now, the park serves only to tease the SoMa kids with its colorful toys safely tucked away behind a temporary chain-link fence.  City officials hope the inspection can take place sometime in the next few days, and the park returned to use.

The idea and execution of renovating the park came from the Rotary Club of Marquette.  We’re typically familiar with a lot of our area service clubs from their various fundraisers… like next Sunday’s popular Chicken BBQ put on by the Marquette Noon Kiwanis, or this Rotary Club’s annual golf outing.

We’re often less familiar with the good works these clubs do with the money raised through their fundraising events.  According to Rotarian Sally Davis, the Hurley Park project came together after her club identified a need and put it on their to-do list. 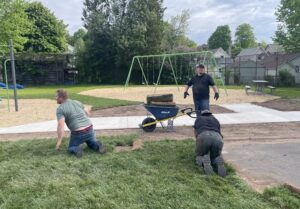 Rotarians… doing what they do for the community.

“The Rotary Club of Marquette led the project, but all three Marquette Rotary clubs have donated and participated.  We held an ice cream fundraiser at Presque Isle.  Vango’s donated ice cream and hot dogs and we gave them away for free…and of course encouraged donations.  It was heartwarming to see the turnout and to watch kids drop coins in the bucket and adults adding $50 and $100 checks.  We heard so many comments about how people played there while parents played ball, and how much new equipment was needed.”

It would take too many words to go over all the projects handled by our various service clubs.  Suffice it to say… when you see a service club fundraiser, consider contributing. Your time and money will be a valuable investment in our community.

We’ve also seen questions as to why the ballfield… Hurley Field, is not available for casual use.  Well, it seems the teams that use the field for competitive play, and also contribute to its maintenance, too often found the field in poor condition due to unsupervised activities.  So now it’s off-limits to unscheduled use.  Unfortunately, not everyone knows how to behave when using shared city facilities.  And that’s why we can’t have nice things.

A recent Monday night at downtown’s Aubree’s Pizzeria & Grill found a full dining room with multiple parties waiting to be seated.  And the summer rush is just getting started.  As the old saying goes… “If it ain’t broke, don’t fix it.”

Owner Bryan French has a different idea, hopefully an even better one.  “I wanted to go in a different direction than what the Aubree’s franchise was doing. I wanted to bring some new flavors to the menu, with a big focus on fresh ingredients.”

So, beginning Monday, June 20th, Aubree’s will transition to… Third Coast Pizzeria. There’ll be a few physical changes, inside and out… when French can find people available to do the job.  Until then, he’s doing most of it himself.  But more than that, he hopes you’ll appreciate their commitment to fresher, house-made items.  The new menu will feature Detroit Style gourmet pizza, as well as a few of the more popular items that diners have grown accustomed to. 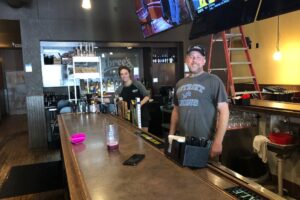 French knows it’s a risky proposition to mess with a good thing, but, running a business these days is risky anyway.  So even though it may not have been broke, he’s fixin’ it… his way.

Have you heard?  Your Marquette property taxes are probably going up.  (When did they ever do down?)  It’s basically a choice that comes down to… higher taxes or less city services.

I think we can rest assured that our city commissioners are not pleased they’re faced with that choice.  Raise taxes and their phones ring off the hook, if they were on a hook.  Cut services and their phones will… whatever, same deal.

It seems the city is a little short on cash.  Blame it on a lot of things, but one of the most consequential is the closing on the We Energies Presque Isle Power Plant.  If you’re a businessperson, you understand the implications of losing one of your biggest clients.  Something has to give. And in this case, it’s the taxpayers.

A lot of folks blame the brownfield projects that delay tax collection for a number of years.  But most of those properties weren’t bringing in much anyway, and at least with development, we can count on some return in the near future.

If our home values are rising faster than ever, shouldn’t that translate into more taxes, organically?  Not exactly.  Laws are in place that limit the tax revenue that can be realized by higher property values. 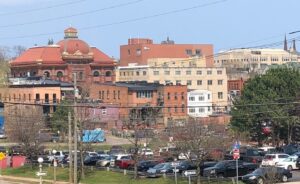 As the city grows, so does the need for services

Which brings us back to the question… higher taxes or fewer services?  If you choose the latter, you then have to choose which services are to be cut.  Pick one.  Any one.  And if we knew your phone number, your phone would be ringing off the hook too.

We elect our commissioners to make such decisions.  From what I gather, they want to hear from you, but, understand… they’ll make the final call, and it’s never going to make everyone happy.

You want to be happy?  Be happy that you live in a community where property values are on the rise, and where we have city leaders who aren’t trying to bury the bad news, but rather are addressing the issues that will determine how Marquette builds on its current popularity.

Not raising taxes is always an easy sell.  Cutting services?  Not so much.  After all, it’s many of those services that have made Marquette the desirable destination it’s become.