Happy NMU Homecoming? The Good, the Bad, and the Ugly

Though much of the news coming out of Northern these days has been… uh, not so good, there are some things to celebrate, so let’s do it here.  For one thing… it’s Homecoming Weekend!  Tonight and tomorrow the volleyball ‘Cats are in action at the Vandament Arena while tomorrow afternoon the football ‘Cats entertain Wayne State at the Superior Dome. 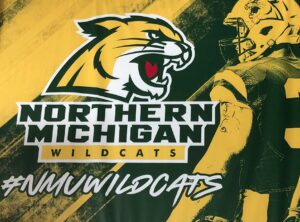 Beyond that, after last year’s virtual event, Homecoming is back with a full slate of campus-wide events, get-togethers, and the popular Homecoming Parade, now scheduled for Saturday afternoon, prior to the football game.  But for fans of Wildcat Football, there’s another event that should get your attention.  It’s the screening of the award-winning documentary, Put Your Hand on the Line, produced and directed by former Marquette resident Scot Fure.

The film chronicles, through interviews and story-telling, the Wildcats’ improbable season of 1975.  If you don’t know the story… and you should, it’s all about the unprecedented “worst to first” journey that started with a winless season in ’74 and culminated with the Division II National Championship the very next year. 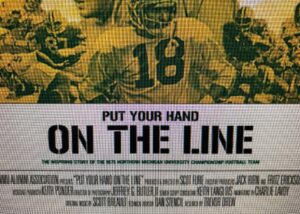 Fure’s film includes the recollections of many of the team’s key players, including quarterback Steve Mariucci and plenty of other guys with names familiar to those who followed that team some 46 years ago.  And unlike other sports stories put to film, there’s not much embellishment.  There’s no need!

The film has received a number of festival accolades and is currently being employed as the template for a full-blown Hollywood production.  Team member and the film’s Executive Producer, Jack Hirn, is working on getting the project in front of the right people, who can take it to the silver screen.  Think Remember the Titans, without all the social ramifications.  Though it happened a couple of generations ago, the story of an underdog team finishing off the greatest turnaround in college football history practically writes itself. 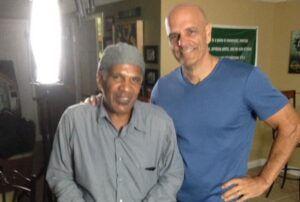 You can check out the film at the free screening, open to the public, Saturday morning at 11am at Jamrich 1100, presented by the Beaumier U.P. Heritage Center.

Sure to be remembered for his role in that championship season, former NMU Assistant Coach Carl “Buck” Nystrom, passed away earlier this week at the age of 88.  To say he will be missed falls short.  We’ll also miss everything he did for the good of the game he loved. 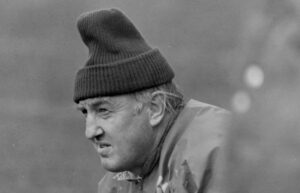 A Marquette native, Nystrom was a high school star student and athlete, and followed that up with a college career that filled the sports pages and the trophy case.  He was an MVP and team captain at Michigan State, and played on two national championship teams with the Spartans.  From there he went on to be the offensive line coach for three different national championship teams;  North Dakota State in 1965, Oklahoma in 1967, and NMU in 1975.

The title of the aforementioned documentary, Put Your Hand on the Line, comes from a mantra adopted by the team, no doubt inspired by Coach Buck.  As far as he was concerned, it all started in the trenches, with your hand on the line, face-to-face with success or failure.

You might think that with all his accomplishments his ego would fill the room, but no, he’d talk to anyone, anywhere, anytime… and not just about football.  But if you wanted, he’d talk football.  Successful coaches are able to teach as well as motivate.  Coach Buck was good at both.

Back in the day, as a member of the media, I was invited to “coach” one of the teams in the spring Green & Gold intrasquad game.  Coach Buck was one of my “assistants.”  In a game that didn’t count, I got to see the passion that made the guy a winner, and how he inspired the players.  I’m pretty sure I didn’t care who won that game, but you can bet I didn’t let Coach Buck know that.

Put your hand on that line, young man!

As suggested earlier, it’s been a trying week to be a Wildcat.  As in… trying to figure out why the NMU Board of Trustees, in a surprising move, terminated the contract of university president Dr. Fritz Erickson.

And… trying to understand how an agreement between the university and the professors’ union went down in flames, after it had been tentatively approved by negotiators on both sides. 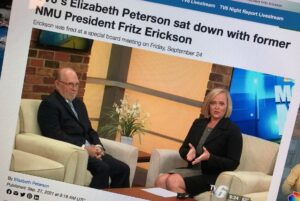 Regarding Erickson’s dismissal, comments on the “why” are hard to come by.  Earlier this week the former president appeared on TV6 doing an interview with morning news anchor Elizabeth Peterson.  It was a good “get” for Peterson, but we didn’t “get” much from Erickson.  He suggested that disagreements between his office and the trustees about how to deal with the pandemic may have played a part.

The vote for dismissal was 8 – 0.  It’s hard to believe that it was only Erickson’s pandemic plans that were met with unanimous opposition.  You’d have to go on a statewide search to find eight people who agreed on anything regarding the pandemic, much less find eight in the same room.  So, there might be other factors… and there usually are.  As Erickson said during the interview, in which he took the high road, presidents serve at the pleasure of the trustees.  Apparently, the pleasure wasn’t all theirs.

After evacuating the corner office, Erickson has indicated that he plans on taking a sabbatical year and then coming back to Northern as a professor.  Huh…

The faculty contract issues might be harder to resolve than just replacing a president.  Employment agreements with professional unions are complicated things.  And it’s not just about the paycheck.  But it’s mostly about the paycheck. 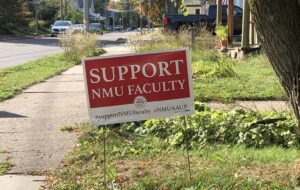 If you think it’s a challenge to get eight people to agree on something, imagine trying to satisfy the contract expectations of a few hundred university employees… and the folks who hold the purse strings.

Of course both sides say they are hopeful for a resolution, but it’s hard to see where negotiators go from here.  They already thought they had a deal.  Oh well.  So did Fritz Erickson.  Things change.