“She doesn’t know it’s Christmas,” says her son-in-law, Jon Babbitt of Grand Marais. “She doesn’t know what day it is, but when we put the phone up to her ear, she seems to recognize her grandchildren. And she knows we’re here with her. She’ll grip our hand. You can just tell there’s something there. There’s a little light that shines in her face.”

The end is near. She hasn’t eaten in more than a week.

Jon and his wife Sharon, who’s Amy’s daughter, moved Amy to Trillium House just last Thursday after a long, difficult month. Amy had had a heart attack, she was suffering from dementia, and she had fallen four times in one day–all this while living alone at her home in Thompson, outside Manistique.

Her husband died two years ago.

She had regular caretakers and Sharon traveled from Grand Marais to stay with her for days at a time but Sharon worried, in particular, that she wasn’t able to control her mother’s pain with medications. She was feeling helpless and isolated with a dying mother out in Thompson. The home was in the woods, seven miles out of town.

That’s when they found out about Trillium House. 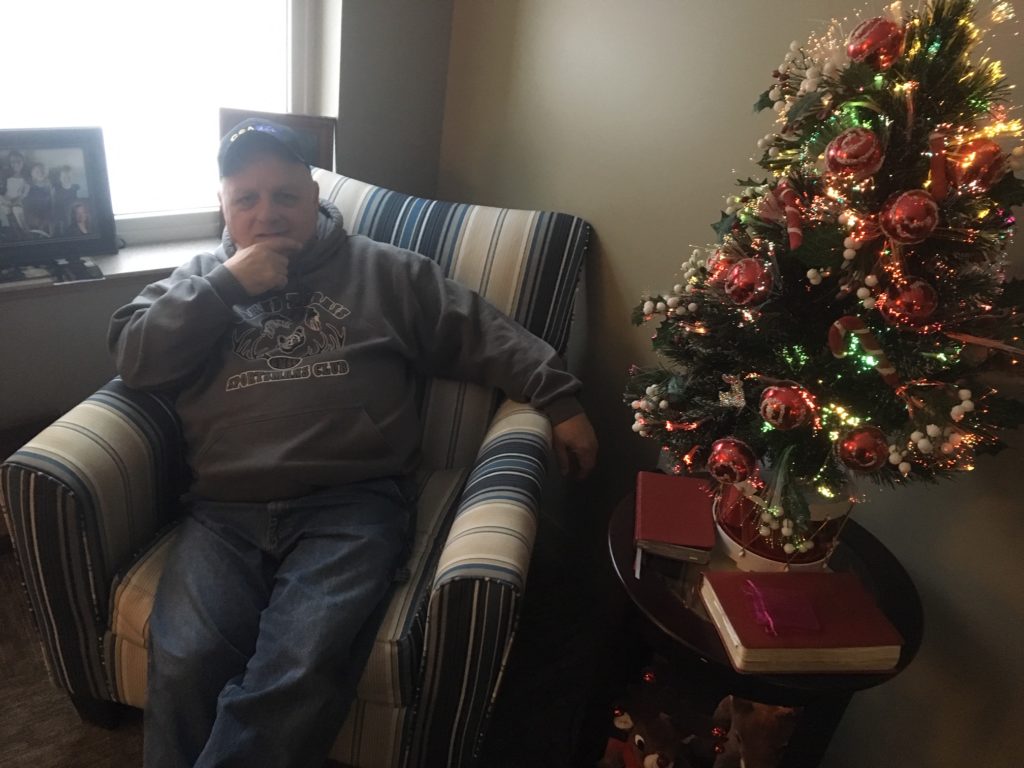 Jon Babbitt and his family brought Amy’s Christmas tree to her room at the Trillium House.

“This is such a beautiful place and they’ve been so kind to us!” Sharon says, as she sits bedside with her mother who now sleeps night and day, hardly ever moving. “They take such good care of her and her pain is now under control.”

“Once we moved Amy here, it was like a burden was lifted,” Jon adds. “All the decisions we had had to make were lifted as soon as we walked in the door.”

In spite of lingering illnesses over the last few years, Amy had been active throughout her 80s.

“She loved hunting,” Sharon tells you. “She went hunting last year and got a beautiful buck (the top photograph). We hauled her out in a sled to one of her deer blinds that my dad had built on their forty acres. She wanted to go out again this year but she just couldn’t. She could hardly walk.” 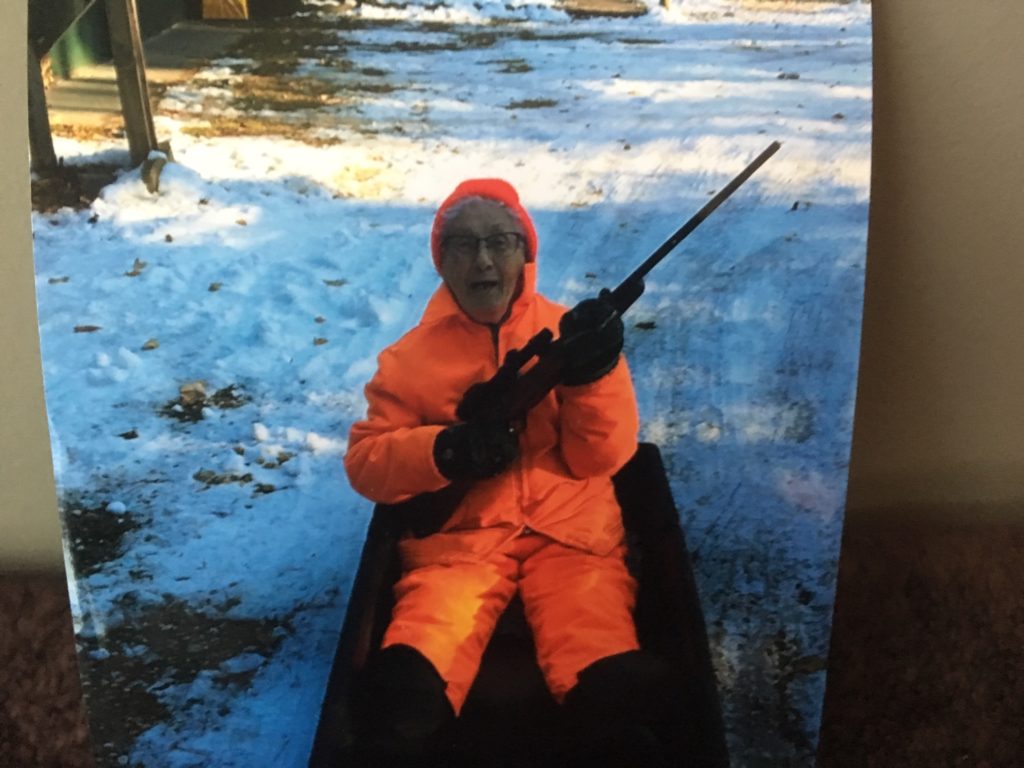 As recently as Thanksgiving, though, she still seemed in good spirits, in spite of recent falls.

“The day after Thanksgiving, her whole house turns into a fairyland of Christmas,” Sharon says. “My sister helped her decorate this year, but we never got all the decorations up because my mother just couldn’t do it. Some of her decorations are still in the garage.”

“She lived for Christmas,” Jon says. “Her house was filled with Christmas.”

And just ten days ago, shortly before she took to her bed for the final time, she experienced a few wonderful moments of Christmas joy.

“She had a knock at the door and seventeen people from her church were standing there,” Jon says. “They sang Christmas carols for her. They knew Amy was isolated and they knew she was lonely. All she could say after they left was that she had worried that her church had forgotten about her, but when they showed up, she said, ‘They came here. They remembered me.’ That was the last time I saw her smile.”

No more smiles now. Just a final, restful sleep for a woman who worked several jobs throughout her long life but, above all, was devoted to her family, her church, and her community.

Her family has gathered around her at the Trillium House. They’ve brought in her longtime Christmas tree from home. They brought in her dog for a day to say goodbye. They’re carrying on Christmas traditions–baking hobo pies on Christmas Eve night–and they pass the time, talking quietly among themselves, waiting and watching. 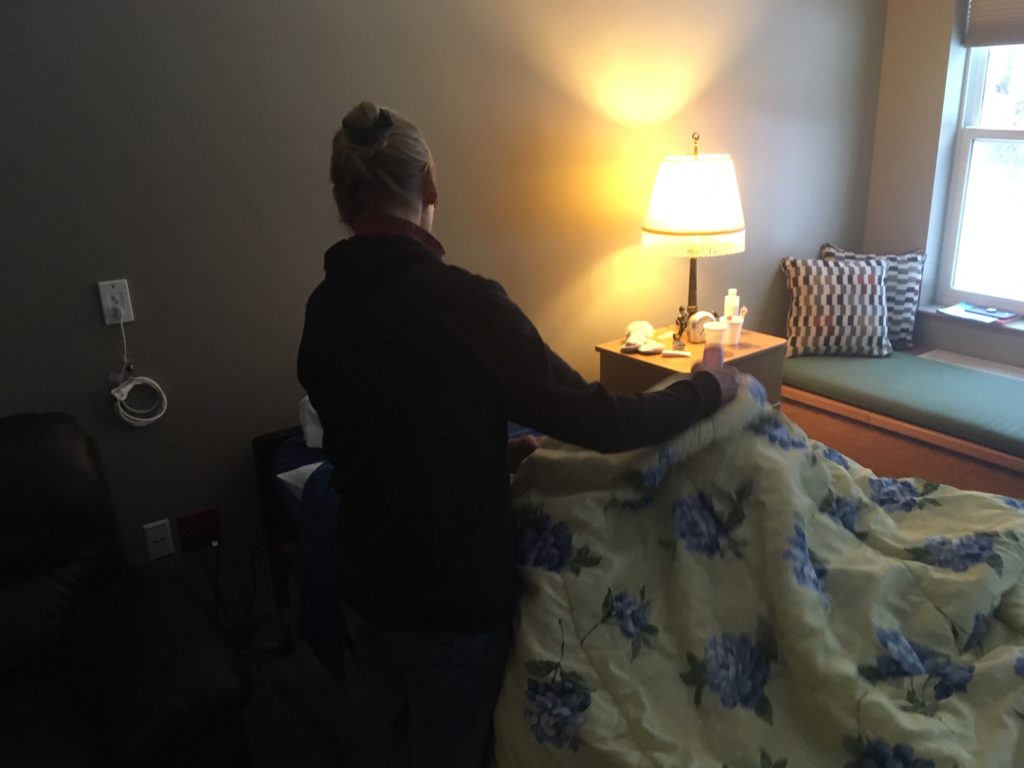 Sharon Babbitt is staying by her mother’s side until her mother passes.

“It’s a different kind of Christmas,” Sharon says, her voice barely above a whisper, “but we’re here. I’m just glad to be here with my mother and my family.”

She straightens the blanket around her mother, then sits down again next to her and stares out the window at the descending twilight. She’s left with her own unspoken thoughts about a mother who brought her into this world, and is now preparing to leave it.