It is widely accepted that our many particular recreational destinations are what help make this area so special.  Things like Black Rocks, Presque Isle, Sugarloaf, Lake Superior, and all the other cool spots that locals love, and visitors love to discover.

Hard to argue with the list of ‘places’ that define Marquette.  Our natural beauty, and the awe it inspires, are why many people decide to settle here.

And it’s precisely those ‘people’ who prove the theory… the whole is greater than the sum of its parts.  As we know, it takes a special spirit to live far removed from the urban centers, where many of our nation’s creative types find their calling.  These special people, the talented folks who prefer to live and work here, are the frosting on the cake… the artistic element that adds a colorful layer to our physical beauty.

Working quietly, often behind the scenes, local artists add the cultural element which allows the rest of us to enjoy the benefits of their talents.  They’re our neighbors, associates, and friends.  They’re people like Jack Deo.

Before Donckers expanded their candy store to include a 2nd-floor restaurant, the space was occupied by a vintage photography store called Superior View Studio.  Opened in 1978 by Jack Deo, Superior View was the brick and mortar headquarters of what has been Jack’s lifelong passion for historical photographs and related artifacts. 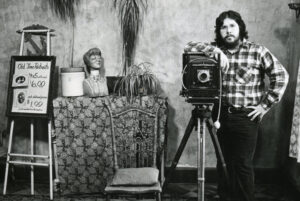 In 1997 Jack opened a satellite store called Views of the Past in Mackinaw City, and in 2003 he ramped up his Marquette operation with a move to the corner of Third and Washington in the building currently occupied by Yoop-Phoria.  All the while he was adding to his growing collection of photographs.

As you might imagine, Jack didn’t go into the historical photo biz just to make money… although he has.  Rather, it’s been an interest since he realized an appreciation for photography while in high school in lower Michigan.

Like many other folks who ventured north to NMU, Jack found a natural outlet for his creativity, and in his case, it was with a camera.  Inspired by the area’s scenic beauty, he began his professional career producing nature photography.  And, in what we’ll call ‘foreshadowing,’ he first exhibited his work at Art on the Rocks, in 1977.

That’s when he began his decades-long journey into the past, unaware that some 45 years later he’d still be on that trip through time.

“I started collecting old photographs and negatives and became a regular at U.P. auctions.  And I owe a ‘thank you’ to the hundreds of individuals who’ve shared their history and photographs with me.”  Jack also credits his wife Cindy for her partnership in the process… one which has compelled a lot of road time, a 24/7 schedule, and a shared appreciation of historical relevance.

Working from home now, Jack has a website, an eBay Store, and reproduction photos for sale in 18 outlets around Upper Michigan.  If you’ve been to any art show in the U.P., you’ve probably seen some of Jack’s work. 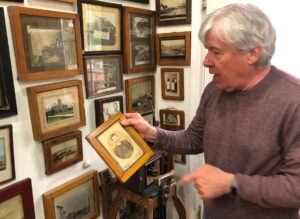 Every picture tells a story, and Jack knows them all.

Which brings us back to Art on the Rocks.  Jack has been involved with Art on the Rocks and the Lake Superior Art Association since 1977.  He’s served in various positions in the LSAA, including President for many years.  And he’s still involved today.

In addition to his commitment to the preservation of vintage photography, Jack is also involved in any number of exhibits and presentations based on important events that have helped shape the Upper Peninsula’s culture.  In fact, next Wednesday, he’ll be leading a discussion about the book and film, “Anatomy of a Murder,” at Ishpeming’s Carnegie Library.

And currently, through August 27th, Jack’s stereograph collection of images from the late 19th century, taken in communities and locations around the Upper Peninsula, is being displayed in 3-D at Northern’s Beaumier U.P. Heritage Center.

The Beaumier Center’s Dan Truckey has had the opportunity to work with Jack on a variety of projects.  “Jack’s efforts to save the visual history of Marquette and the U.P. is second to none.  He’s also been incredibly generous with his time and collection for the benefit of local organizations and communities.”

As previously mentioned, many of our community influencers work behind the scenes, rarely recognized for their contributions.  But, at some point, people can no longer ignore the efforts made by people like Jack and Cindy Deo.  So, on December 1st, 2018, the Lake Superior Art Association’s gallery in the basement of the Peter White Public Library became the Deo Gallery. 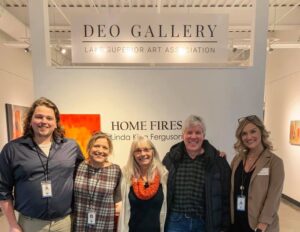 Flanking Cindy and Jack Deo at the dedication ceremony are Tristan Luoma, Tiina Morin and Taylor Kulju, from the city’s Office of Arts and Culture.

At the same time, Jack was presented with the LSSA Lifetime Achievement Award.  So, you would think Jack would finally take a step back and pass the torch to the next generation.  Nope.  Once a collector, always a collector.  “I’ve been very lucky to have my passion become my career,” Jack says.

One of his very first jobs was providing U.P. photos to the Michigan Historical Museum in Lansing.  More recently, photos from Jack’s extensive archive have been seen locally at Marquette Baking Company, Northcross Group and Iron Bay Restaurant.  And his own photography, as well as photos from his collection, have appeared in nearly 100 books and publications.

Jack’s work comes in all shapes and sizes.

Later this month, on July 30th and 31st,  Art on the Rocks will celebrate its 62nd year as one of the Midwest’s most prestigious art shows.  Something like that doesn’t just happen.  It takes the dedication and commitment of people like Jack Deo.

To find out more about Jack and his photographs, visit viewsofthepast.com.