Housing Issues Continued… and Word on the Streets

Housing and the Hospital Property

THE REDEVELOPMENT OF the old hospital property is in the news again, and probably will continue to be in the news until somebody turns a key and moves in.  But, to what?  That’s the question on everybody’s mind now that the city has approved the brownfield plan and there appears to be a clear path to demolition and redevelopment.  This after Tuesday’s regular City Commission meeting where the proposed TIF agreement came to a vote, and where a number of citizens came to address the question of “what?”   As in… what part of the 23 acres will be dedicated to affordable housing?

Though there’s been plenty of opportunity for public comment prior to Tuesday’s meeting, that didn’t stop a loosely organized last minute appeal, focused on that hard-to-define… affordable housing.   Passionate, with some of their stories bordering on the pathetic, those who spoke out Tuesday continued to beat the drum of a growing housing shortage to a commission that’s heard it all before and is well aware of the problem.

The fact of the matter is this:  Once Veridea takes over, they can do whatever they want, or at least whatever they’ve agreed to with the NMU Foundation.  We’ve said it here before… it’s a private project with no obligation to respond to anyone’s needs but their own, and those needs likely include a profit on their investment.  Veridea has a reputation for doing good work around town, and people speak highly of CEO Bob Mahaney.  Veridea isn’t the problem.

It was mentioned during the meeting that current housing construction costs are around $300 a square foot.  Multiplying that to an average sized home of 1,400 square feet, you get… aught, aught, carry the aught… about $420,000.  That’s not Beverly Hillbilly money, but it’s a pretty big nut for the blue-collars of Marquette to carry. 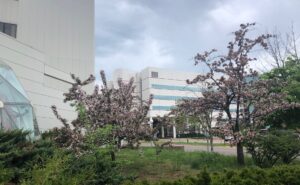 Maybe the site of a future new neighborhood?

The high cost of housing affects both home buyers and home renters.  Nicholas Overmyer spoke at the meeting and, like most of the others who shared their stories, told of how it’s almost impossible now for people of moderate means to live in the city.  “As I see the prices of rent going up, I know I am extremely fortunate my landlord doesn’t raise the rent. If he raises the rent even $100 to $200 it’s going to make life really difficult.”

Ryan Labinski shared his story of searching for a place to live, even experiencing a couple months of homelessness, while offering a $1000 finder’s fee to anyone who could help him land a permanent address.  Gainfully employed people, like Labinski, continue to struggle finding affordable, livable housing in Marquette.

Janna Fox, of Habitat for Humanity, told the commission they have a hard time finding vacant property in the city where they can build new houses.  What agency is better positioned to address the housing shortage than Habitat for Humanity?  It’s what they do!  With that in mind, it was suggested that some of the available city-owned property be dedicated to workforce housing.

According to Dennis Stachewicz, Director of Planning and Community Development for the city, there is a limited amount of available city property that could be considered for the development of new housing, affordable or otherwise.  “With regards to the process for development, the most likely scenario is that the City would need to seek to sell the property to developers and from that point, it becomes an economic exercise given the current situation with construction materials and labor costs.  What I have been hearing from developers is that the ability to provide such a product [as affordable housing] is impossible without some form of financial subsidy.”

In other words… there’s no easy fix.

Our city leaders are not unsympathetic.  Opening up city land for new housing and adjusting zoning laws to allow for more multi-family dwellings are a couple things to be considered, but… and there’s always a but, this is not a problem unique to Marquette.  The lack of essential workforce housing is acute in many Michigan cities, particularly those experiencing the type of popularity going on here.  Have you heard of businesses around town having a hard time finding workers?  It’s not hard to see why.

Will the development of the hospital property ease the housing crunch?  Maybe.  A little.  There will be more opportunity for public input.  If you have an idea how all parties can be satisfied, by all means… share it.

Problems like the lack of affordable housing are self-evident.  Solutions… not so much.

Word on the Streets

It’s only June 3rd but the summer rush appears to have started.  Bumper to bumper traffic is becoming more commonplace, as well as the big city traffic jams we live here to avoid.   A whole new cross-section of travelers has discovered the U.P, and this year, regardless of exorbitant gas prices,  we will likely see another record breaker.  And just to add to the congestion, the warmer weather has brought out the all-too familiar orange pylons that let you know… your trip is gonna take longer than you thought.

Extensive reconstruction of South Front Street will be the focal point of driver frustration.  The Michigan Department of Transportation is responsible for maintaining that stretch of highway, and even though it’s going to be a major pain in the gas, it’s probably necessary.  Plan accordingly.

Marquette traffic be jammin’ this summer.

Call it ‘temporary inconvenience and permanent improvement’ as a few other streets in Marquette, in various states of disrepair, are also scheduled for an upgrade.  However, according to City Engineer Mik Kilpela, it will be a fairly light summer of roadwork.

“We do have some street resurfacing/crack sealing and heavy maintenance occurring.  This work is generally meant to extend the life of existing road surfaces prior to the need for full replacement.”

The city budget will always loom over any reconstruction project, and in case you haven’t been paying attention… the city is not flush with cash.  So rather than budget-busting full replacement, they’ll be doing some less expensive touch-up where it’s most needed.

College Avenue through the old hospital was on the schedule but that’s been postponed and will be a part of the property redevelopment, whenever that happens.  A couple other streets that are both busy and in need of attention are Altamont and Division.  But don’t expect to see much done with those, at least not this year.  “Both projects are high priorities,” says Kilpela.  “We have collected topographical data and started some design.  Both projects include extensive utility replacements.  I’m hoping we can get to these projects soon…  More to come during the FY23 budget meetings.  There is some uncertainty regarding funding these projects.”

“Uncertainty” describes a lot of things these days.  But there’s one thing that’s certain for sure.  It’s summer in Marquette.  Enjoy!