“I’m Afraid Some of Them Won’t Make It”

SO WE’RE LOOKING at a possible partial reopening of Michigan on May 1st.

It can’t come fast enough for most businesses in the Upper Peninsula.

A recent Federal Reserve survey of the UP and six states to the west of us (but not Lower Michigan) revealed this: nearly sixty percent of UP businesses said if things didn’t return to normal within six months, they’d have to close down.

Marty Fittante, the CEO of Invest UP, says that’s consistent with what he’s heard. “I’m afraid some of them just won’t make it,” he explains. “And that’s because so many of the businesses in the UP are undercapitalized.”

They’ve been operating on a thin margin, with little cash in reserve.

“You want to give them a fighting chance to survive,” Fittante adds. “They’re going to need more money from the government.”

Fittante was recently involved in the disbursing of $500,000 in Small Business Administration grants to businesses across the UP. Almost 800 businesses applied for the grants–only 80 received them. Average grant was just over $6000. So how’d they decide who got the money, and who didn’t?

First, they had to employ fewer than 50 workers, and they had to demonstrate that COVID-19 had impacted them. Beyond that, these were the criteria:

Some were objective factors, others subjective. Fittante concedes the process was not perfect, but they did the best they could with it. And yes, he’s hoping that more money will be made available so that the businesses that were rejected initially will get some help in the next round.

Which businesses actually did get the grants? Fittante says the list will likely be publicized in the next week after all the grant agreements are signed.

Another survey–this one being conducted by Marquette’s Downtown Development Authority, asking businesses how they’re handling the crisis.

“The results we have received so far are sobering,” says Rebecca Salmon, the executive director o the DDA. “They’re worried about the sustainability of their businesses. They’re wondering what the reopening of the economy will look like.” In other words, will their customers return, and in what kind of numbers? 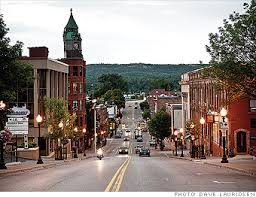 Downtown Marquette will likely suffer during this tourist season.

Businesses heavily dependent on tourism will likely be especially hard-hit because there will almost certainly will be fewer tourists traveling in the UP this summer. And restaurants that might be required to allow more spacing between customers will have to shrink their capacity…and their revenue.

So again, the urgent need for more governmental help. The federal Paycheck Protection Plan “loans” (which will likely be forgiven) have been an enormous help to many local businesses–they guarantee paychecks for the employees for eight weeks–but not every business got the PPP money, and now we’re told the money has run out.

Keith Glendon, who owns the tech firm Lucid Coast and Campfire Coworks downtown, got turned down for the PPP money. He’s hoping he’ll get it in the next round, if there is a next round. He recently resigned from IBM and sank a heavy investment into Lucid Coast–a risk that’s been compounded by the COVID-19 pandemic. Is he concerned? Absolutely.

“I think we’re facing a couple of hard, hard years for everyone,” he says. “We’re headed for a significant shift. We’re not facing just a recession. We need to rethink how our system is working.”

Both our economic and medical systems seem to be broken–some would say they were broken long ago. Can they be repaired? That certainly won’t happen until COVID-19 is finally brought under control, and even our best medical experts and epidemiologists can’t tell us when that will be.

And then there’s this dreaded possibility: We open too soon, the virus returns in full force, and we have to shut down again. That would be devastating medically, economically, and psychologically.

In the meantime, a wee bit of good news: the Farmers Market is scheduled to start up next month. But it comes with this caution from Rebecca Salmon of the DDA which runs the Market: “We want to make the food available to our customers,” she says. “We know they want it, and the farmers want to sell it but at this point, we’re not quite sure how we’ll do it. We want to be safe. We might have to come up with some modified form of the market this season.”

Nothing’s decided yet. We should have more answers on May 1st when Governor Whitmer updates Michigan’s status on the shutdown. The farmers and all other businesspeople of the UP will be waiting anxiously.