In case you were wondering…

In case you were wondering why there’s a City Band concert at the Presque Isle Bandshell but the band isn’t on the stage but rather on the grass in front… well, the Bandshell is temporarily shut down.  It’s almost ninety years old, and like many other ninety-year-olds, it’s showing its age.

And here’s the bad news for those who love the old structure… the shutdown is probably more than temporary.  The Bandshell’s days are numbered, and it’s not a big number.  While we’ve torn down plenty of things that seemed worth saving, those close to this situation know that this Bandshell isn’t one of them. 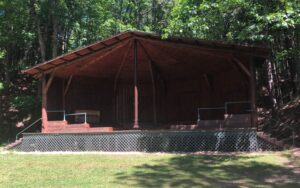 The Presque Isle Bandshell… destined for the history books.

The good news is that replacement is already being discussed.  And maybe ninety years from now our City Band will be looking at the next new Bandshell.

In case you were wondering about the new parking system downtown, you’re not alone.  A recent Facebook post initiated by a new appointee to the city’s Traffic and Parking Advisory Committee asked readers to share their concerns about such issues.   Well… there was no shortage of opinions, many of them uncomplimentary towards the metering system now in place downtown.

Nice gesture by the eager appointee, but unfortunately for those seeking her advocacy, parking in the downtown district is not handled by the city, but rather it’s under the control of the Downtown Development Authority.  And they’re well aware of citizens’ concerns.  Acknowledging that the system is new, and adjustments can be made if necessary, the DDA staff and board are taking a “give it time” approach. 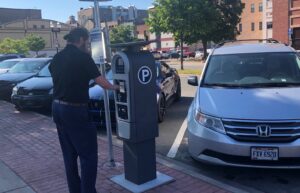 To be sure, it’s not something our DDA created.  It’s being used in many communities across the country, and just like the turn to self-checkout in our grocery stores, it’s the future… and it’s here now.

If maintenance is streamlined, and revenue is enhanced, and people still park downtown, the program will likely be considered a success… whether users like it or not.

To learn more about the system, you can find information on the DDA website at downtownmarquette.org.

In case you were wondering where those tacky Pedestrian Crossing signs went… the ones we used to see in the middle of busy intersections that said we can’t run people over if they’re already in the crosswalk?  Well… they’re gone. 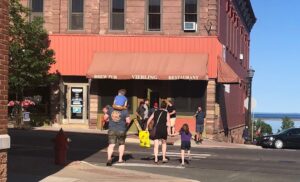 It seems that while the signs indicated that yielding to pedestrians in the crosswalk was Michigan law… it turns out that’s not necessarily true.  So, the signs have been put in storage.  Fine.  I don’t need a sign to tell me not to run somebody over.  And, as a pedestrian, I generally try to avoid stepping in front of traffic.  Do we really need a sign for everything?

In case you were wondering when we’ll see some big acts in the Ojibwa Casino’s event center, word is that nothing is on the books… yet.  They’ve used the room for a bridal show and a few private events, and there’s a craft show there this weekend, but big time entertainment is on a back burner until necessary staff has been secured and other details are confirmed.  Looking forward to it.  It’ll be nice when we don’t have to drive to Harris to see the groups we’ve been listening to on Pandora.

In case you were wondering about those green recycle bins dotting our streets on garbage night, here’s the deal.  You’re gonna get one!  The city is taking advantage of a one-time grant that pays for the bins, as long as one is distributed to every qualified household.

Not everyone is happy about it though.  One dissatisfied resident recently shared her concerns with city staff, including, but not limited to:  no place to store them, difficult to handle for elderly and handicapped, and… just because they’re free means we have to take them?  And, she says the majority of her senior friends feel the same way. 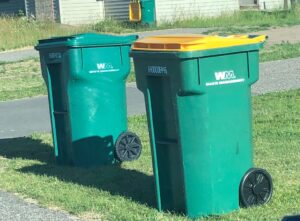 They say you can get used to anything. We’ll see.

Unfortunately, this has already been discussed and debated by the city commission, and a majority ultimately approved the plan.  Like the aforementioned parking system… it’s happening, and the bins are on their way.  We’ll see how it works.

In case you were wondering what’s going to happen to the Jacobetti Home for Veterans once they leave their current facility and move to a new building, word is that, we don’t know.

According to Jacobetti Administrator Ron Oja, the state owns the facility and will be responsible for the building and property once the residents leave for new digs, which should be sometime in the next couple of years. 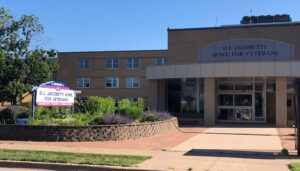 A new veteran’s home? Great! But what happens to the old one?

We probably don’t have to say it, but we will.  Let’s hope it doesn’t turn into another orphanage story, and sit abandoned for the next few decades.  Maybe the old hospital property redevelopment can serve as some kind of template, in both turnaround time and future use.

In case you were wondering when Jimmy John’s is going to open on North Third, word is they’re looking at a fall startup.  Construction delays have pushed them back a little, which means they’re missing out on a potentially big summer. 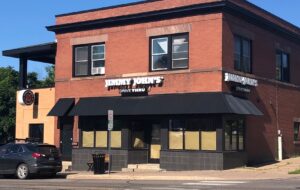 With both worker and material shortages, it seems a lot of projects are experiencing costly delays.  It is what it is.  In case you were wondering.