WELL, IT’S NOT goodbye quite yet, fortunately.

But yes, Mike Walker, one of Marquette’s food truck pioneers, will be shutting down his much loved food truck, Dia de los Tacos, at the end of the summer. He’s already started his 100 day Farewell Tour.

Some of Dia’s fans would contend that the loss of Walker and his food truck is greater than the departures of Shopko, Penney’s and Younkers.

Great food, awards, celebrity…so why oh why, Mike, will you be shutting it down?

“I’d been wondering for a while if I had other things I’d like to do as a career besides making tacos in a truck that is freezing cold 6-7 months a year,” he explains. “I’ve fantasized about working in a cool retail shop since I was a kid and I’m as passionate about books as I am about food.”

So….come October, he’ll be taking a job selling books at Snowbound, which certainly qualifies as a cool retail store.

“He’s been a great customer, he loves books and he gets along with everybody here,” says Snowbound owner Dana Welshans. “We’re excited to have him.”

“I’m looking forward to staying in Marquette,” Walker says, “and walking to a job where I don’t need to put on another pair of long johns once I get there, and getting to know more people in this town from the vantage of a bookstore.”

Tacos and books. Sounds like he has pretty good values. 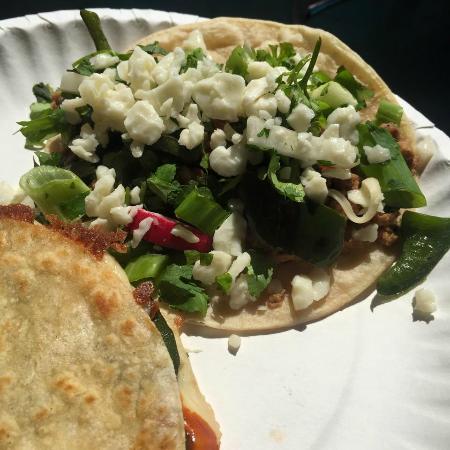 At 43  years old, he’s been running his truck and making tacos for the last six years. That’s enough. A middle age crisis? Taking on a new challenge? Answering to a higher calling?

Whatever. He’s made his mark. He’s shown others that you can make a go of it selling food out of a truck in Marquette, even if you have to wear two pairs of long johns for half the year. Nearly a half dozen trucks are out there right now, a couple more are on the way.

One more thing: Walker hasn’t yet sold his business or his truck, both of which carry considerable good will and cachet, but he says, “I’m open to considering it.”

But if you do buy it, dear prospective buyer, please don’t change the recipes or the menu.