Lake Superior vs Marquette: So Far, the Lake Has the Upper Hand

TWO MAJOR STORMS within a week, and they arrived just about a month after another storm earlier this fall.

The heavy snowfall hasn’t been the problem even though it’s grabbed the headlines. The far more important story was the damage inflicted on Marquette’s shoreline by Lake Superior. Major erosion from Presque Isle all the way down to the Visitors Center.

“We’re going to have more of these storms,” says Mayor Jenna Smith. “We need a comprehensive approach for our entire shoreline.”

However, it’s clear that our approach so far has been anything but comprehensive. It’s been patchwork–fix a problem here, plug a hole  there, bolster the rock wall over there…spend money where it’s absolutely needed, and then watch and wait for the next storm to hit.

“Finally we’re having a conversation about this as a climate change problem,” says newly elected commissioner, Andrew Lorinser. “Until now, it’s always been about damage repair, fixing things to protect and help development.”

And we’re not talking about the disputatious politics of “climate change” here. We’re simply talking inarguable facts: most prominently, the near record lake levels.

“As long as the water stays high in Lake Superior,” says Commissioner Fred Stonehouse, “there will be problems. It’s a problem for the entire Great Lakes region.”

Lakeshore Boulevard between Wright and Hawley Streets is an almost yearly washout.

Marquette hasn’t been ignoring the problems by any means–the city has been dealing with them, one by one, as they’ve cropped up.

The one mile stretch of Lakeshore Boulevard between Wright Street and Hawley Street, which has been battered and repaired several times over the last several years, will finally be moved inland and elevated slightly, with construction slated to start next spring. A major improvement. It should spell the end of those yearly washouts.

The stretch just south of it–from Fair Street to Wright–has also gotten attention. A 1400 foot wall of boulders was being constructed on the shoreline just before the two recent storms hit. 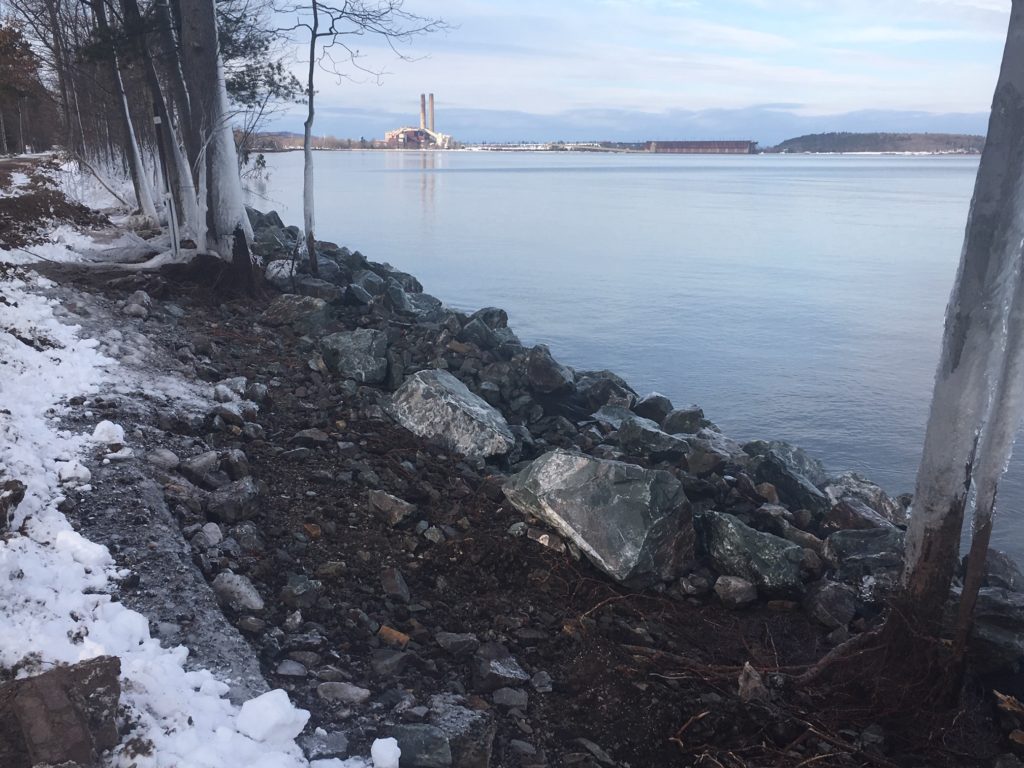 The boulders installed on the shoreline between Fair and Wright Streets helped protect the coast in the last two storms.

“It looks like the boulders did their job,” says City Manager Mike Angeli. “The waves may have had some effect on them but without them, the damage would have been much greater.”

That’s encouraging but Angeli concedes we don’t yet know the full impact of the storm on the boulder wall which will cost $150,000. And will it be able to withstand another storm? And another? As it stands now, the lake is just about 25 feet from the roadway, and only five feet below it. Will that roadway also eventually have to be moved inland?

Farther south, on the shoreline along US 41, the Department of Natural Resources has been busy the last few weeks reinforcing the coastline along the bike and walking path that’s also used by snowmobiles and the UP 200. The shore near the path had been undermined by the earlier storm. 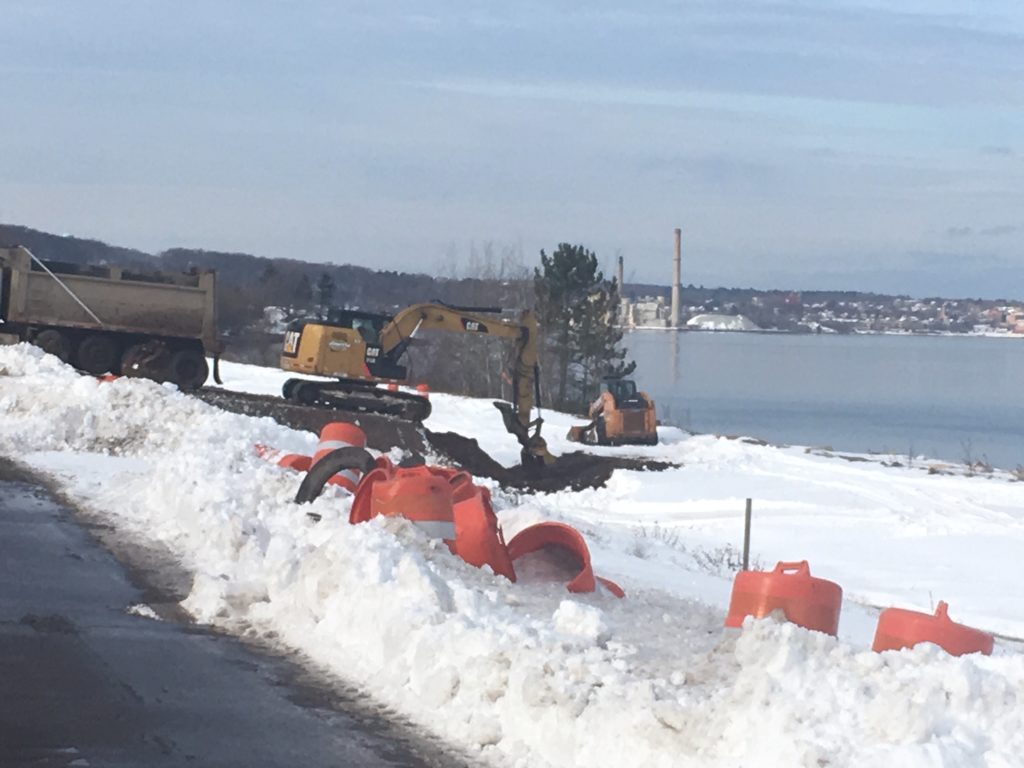 The DNR has been reinforcing the shoreline south of downtown along US 41.

And then, of course, on Presque Isle in north Marquette, erosion has been a chronic problem for decades, eating away at the peninsula, jeopardizing the walking paths and edging ever closer to the roadway. An imposing boulder wall has been erected there, as well, and it seems to be holding, but again, the question: For how long?

“I want to schedule a work session on the problem for early next year,” says Mayor Smith. “The city staff is going to need some time to put together materials, but there’s no doubt we need to come up with a comprehensive plan to handle our entire shoreline from Presque Isle to south Marquette.” 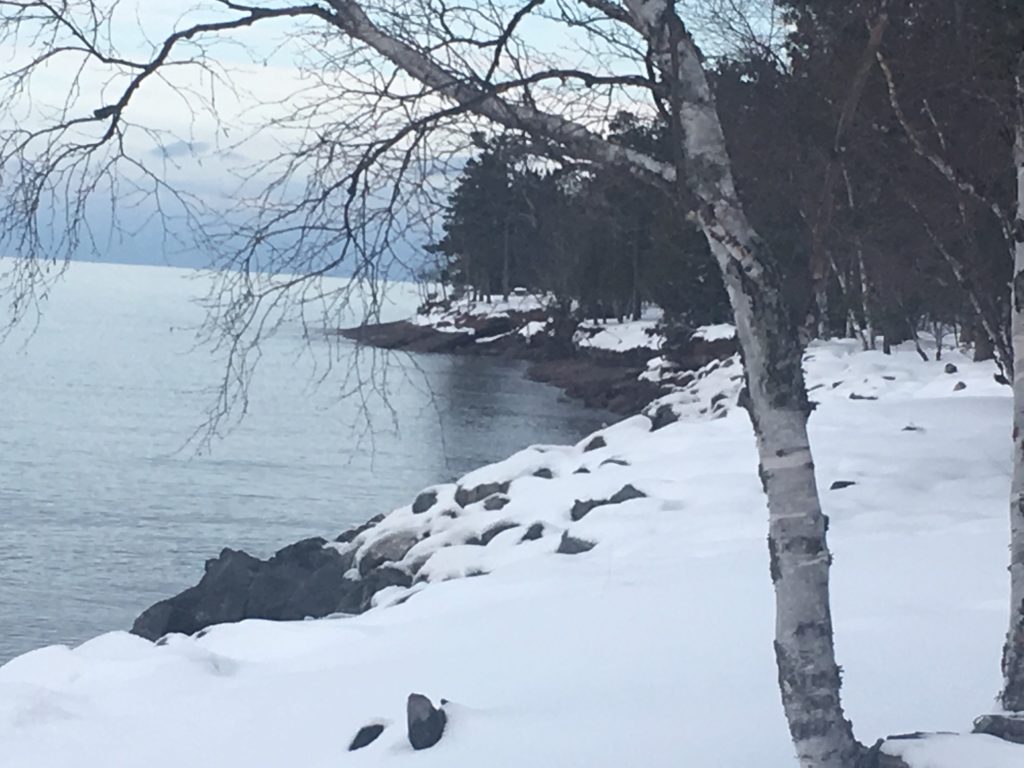 The Lake Superior shoreline is arguably the most attractive feature of Marquette. It’s literally priceless.

And yet, as City Manager Angeli will tell you, the solution is money. “It’s always about money,” he says. “And that means when we spend money to protect the shoreline, we have to cut back on other road priorities in our budget. Those other roads will eventually be repaired, but it may take a few more years.”

Residents in neighborhoods away from the lake may not be happy with that.

Neither Angeli nor Mayor Smith are talking about additional taxes to protect the shoreline–the necessary funds, they believe, will come from grants.

But amid all the gloom and foreboding, there are a couple of positive notes. Angeli says the Army Corps of Engineers is projecting that the lake level will actually decline in the next couple of years. That’ll help.

And this Friday, with impeccable timing, NMU is hosting a full day workshop titled “Coastlines and People,” bringing together governmental agencies, industry leaders and community organizations in an effort to figure how we can sustain our communities along the shorelines of our lakes and oceans.

The hope is, we’ll come out of it with some ideas that would allow Marquette and Lake Superior to live amicably as neighbors even as the Lake seems determined to gobble up more of our land.