THE LANDMARK INN has changed its plans as it moves toward becoming a high prestige Tribute Portfolio Hotel in the Marriott chain.

The revival of the Crow’s Nest on the sixth floor of the hotel, which had been scheduled to start this fall, has been put off until next fall.

“We’re going to reverse things,” says Matt Mering, the managing partner of the hotel. “We’re going to upgrade the rooms first, and then next year, we’ll renovate the sixth floor.”

Mering says it just made more sense to do the 67 guest rooms first. New carpets, new furniture. The rooms will all remain unique, as they have been since the hotel opened in 1997. The bathrooms were all upgraded in the last couple of years.

The first floor–the Pub, the lobby, and the Piedmont–is also due for some changes next year, but plans haven’t been finalized yet.

The postponement of the Crow’s Nest revival will no doubt come as a disappointment to some locals. It’ll involve merging the Northstar Lounge with the Sky Room on the sixth floor, creating a  much larger space for dining and drinks throughout the week. Currently, the Sky Room is reserved for banquets or private parties, while the Northstar, with limited capacity, frequently has to turn people away on the weekends.

The multi-million dollar upgrades at the Landmark are required as the hotel moves up in class to become part of the Marriott Tribute Portfolio. The hotels, forty-three of them worldwide, are upscale, boutique hotels with unique character.

The Landmark will keep its independent identity. It will not be branded as a “Marriott,” but guests will be given Marriott points for their stays there. 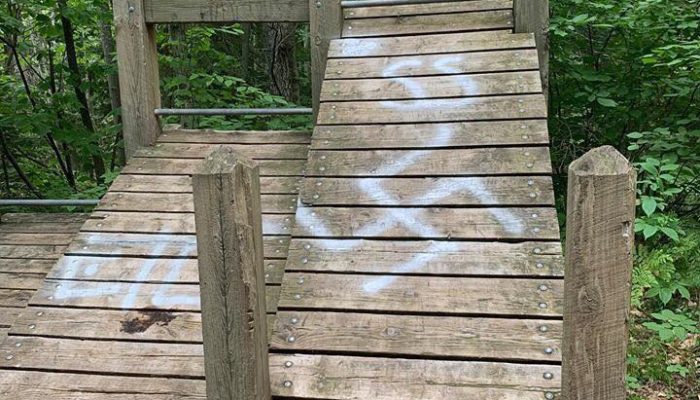 That’s what the Marquette Beautification and Restoration Committee is doing. They’re normally the folks who make things pretty here with flower plantings. Now they’ll be removing the unsightly and embarrassing graffiti around town.

They’re donning work clothes next Wednesday at the Public Works building where they’ll learn how to remove graffiti which has been spotted all over the city. Then they’ll go out and remove some of it.

“We want to raise awareness of the problem,” says Barb Kelly, the vice president of the committee. She’s been part of the group for 42 years. “I was up at Mt. Marquette recently and there was painting all over the rocks. I’m embarrassed for the city.”

Graffiti’s also been spotted on bridges and signs, and of course, most recently and notoriously, at the Fit Strip.

Kelly says the graffiti eradication project is being done in collaboration with the Marquette Police, the sheriff’s department, NMU, Public Works, the Superior Watershed Partnership, and other groups. They’re calling it PROJECT SPARKLE.