The Marquette Downtown Development Authority approved the appointment of a new Executive Director at their regular meeting held this morning at the downtown Commons.

Tara Laase-McKinney, formerly the organization’s Promotions and Events Manager, has been named to fill the vacancy created when Becky Finco left the post earlier this year.

Laase-McKinney has been with the DDA for eight years, and with that experience, has first-hand knowledge of the challenges she’ll face.

“Parking is always a challenge, so we’ll continue to look at ways of tweaking and improving our parking system to balance the needs of users and businesses and reinvesting the revenues into parking, lot maintenance, snow removal, etc.”

And, like many people who make the move into the corner office, Tara has some ideas of things she’d like to get accomplished.

“I’m looking at exploring social districts in downtown, redeveloping the Marquette Commons as a more functional building, and enhancing the Commons plaza to be a welcoming place for the public year round.”

Though the buck will now stop with her, she’ll be taking on a job that seemingly has a lot going for it.  Downtown has certainly benefitted from Marquette’s recent surge in popularity and, unlike in decades past, more businesses are coming rather than going.

An engaged board, led by Chairman Jermey Ottaway, (seen above making the announcement) as well as an experienced staff, will give Tara the support she’ll need to continue moving downtown forward. 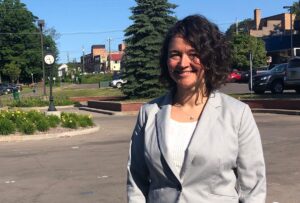 Tara Laase-McKinney, the new Executive Director of the Marquette DDA

According to Ottaway, Laase-McKinney’s experience with the DDA was an important factor, and separated her from the other candidates.

“One huge thing that really came out in Tara’s interviews and throughout this process is her love and appreciation for downtown.  There is no doubt in my mind Tara will always be a champion for Downtown Marquette and that is essential to succeed as Executive Director.”

As with most jobs, there’s a lot more to it than what the public sees.  While we’re having fun downtown during events like the upcoming Blueberry Festival, the executive director will be working behind the scenes on things like revenue stabilization and expanded TIF agreements.

Even though downtown seems to be thriving, the work of the DDA is not without its headaches.  Traffic and parking issues, businesses not always on the same page, as well as a general public that is occasionally hard to please, are just a few of the things the staff and board are faced with.

On ‘Day One’ of her new job, Tara is understandably optimistic about what’s ahead.  “I’m following in the footsteps of two women who have both done really great things for Downtown Marquette.  I started working at the DDA under Mona Lang, and got to see Becky Finco transition into the Executive Director role.  I’m looking forward to continuing their work of making downtown a wonderful place.”