THE CAMPAIGN TO turn Marquette Mountain into a mountain bikers’ destination hasn’t been a smashing success this summer, nor has it been a failure. Somewhere in between, according to Marquette Mountain general manager Andrew Farron.

But he believes they have something to build on.

“We’re still working on designing and building a beginners’ trail,” he says. “We think we’ll be able to do it, and when we do, it’ll open things up. We’ll be able to cater to the whole family, adults and kids.”

The biking passes this summer shuttled the bikers to the top of the mountain, enabling them to take several runs down the hill. The cost on Thursdays is $15, on Saturdays $29.

It’s been a busy summer for Farron, who was just appointed GM earlier this year in the midst of a trouble-plagued ski season when veteran skiers and snowboarders were openly criticizing the former GM.

Farron has promoted a friendlier, more accessible approach while trying to expand the Mountain’s business. He’s scheduled an open forum at the Mountain for September 10th, 5:30. He wants to hear from the community–what they like, what they don’t like, what they want to see happen at Marquette Mountain, twelve months a year.

“The hill is underutilized,” he says. “We want it to be used every day possible.”

That means not only biking in the summer, but also an expanded volleyball league, which has just wrapped up, and greater promotion of Marquette Mountain as a site for wedding receptions. Farron says only two were on the books for this summer when he took over; they added three more. And he’s working on making the Mountain a site for the wedding ceremonies themselves. Outside, with a scenic backdrop. 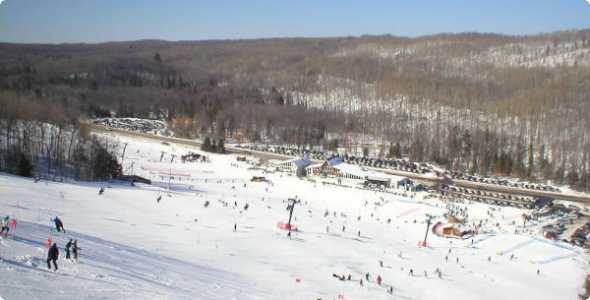 But, he reminds us, “Our biggest priority is preparing for winter.” Marquette Mountain is, above all, a skiing and snowboarding destination.

The mechanical and engineering problems that plagued the Mountain last year (including one lift that never opened) are a thing of the past, he believes.

Why? Because Farron says Pete O’Dovero, the owner of Marquette Mountain, has invested at least three million dollars into the infrastructure of the mountain in the last year and a half. Namely, a new, fully automated pump house…new piping on the hill…20 new snow guns…one new groomer…one used groomer…new LED lighting on the hill…all new snowmaking power…and enhanced maintenance on the chairlifts and the snowmakers.

Farron is appreciative. He’s got an engineering background.

But why all this recent investment? Well, for one, it was sorely needed, if Marquette Mountain were to continue as a viable business. And second, rumors continue to swirl, as they have for years, that the Mountain is up for sale, and the improvements make it a much more valuable property.

Farron can’t concern himself with that. He’s just got his job to do: Bring more paying customers to the Mountain.

The man’s got energy, ambition, and ideas. Now, this upcoming winter, he could use a little help from Mother Nature–heavy snowfall and cold temperatures. Just not too heavy, and not too cold.