Marquette Township… All Grown Up

WHAT USED TO BE just a modest collection of humble homes and seasonal camps in the hills west of Marquette, dubbed Trowbridge Park, has grown to become, inarguably, one of the peninsula’s prime destinations for commercial, residential, and recreational interests.  Now known more commonly as the governmental entity, Marquette Township, this diverse tract of land, 55 square miles, offers, wait for it… something for everyone.

Particularly if you’re into outdoor recreation.  Which, we noticed, a few people around here are.

The township is home to… Little Presque Isle, Sugarloaf, Hogback, 10 miles of Lake Superior shoreline, trail networks, rivers, lakes, waterfalls, and all those little off-the-beaten-path spots only you know about.

Oh, and downhill skiing.  Yeah… the far south end of the township includes a portion of Marquette Mountain. 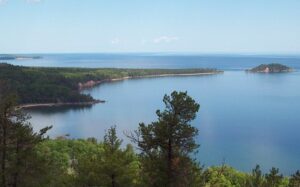 Like many other formerly rural districts around the state, this township has established its own unique identity.  Yes, Trowbridge Park is still there.  One square mile of hilly, leafy neighborhoods with homes representing dollar values from top to bottom.  But with new housing developments popping up, out of what we used to call, nowhere… and fresh commercial development seemingly at an all-time high, the township is escaping the city of Marquette’s shadow, while sharing the benefits of a renewed enthusiasm for our area.

According to township planner Jason McCarthy, the recent census showed a 6% increase in population, to 4140 people. Though not the most populous township in the area, Marquette Township still saw the greatest increase in residents.  With much of the U.P. experiencing a decrease in population, that should tell you something.  And there’s plenty of room for more people, and the attendant services, while still preserving that in-the-woods feeling.

Currently, provided the process makes it through all the necessary approvals, agreements, and applications, officials are coordinating an effort to establish a 16-acre recreation area that would surely complement the township’s image, and reality.  Picture a gathering place, centrally located, for events and activities.  Think what Mattson Park has done for downtown Marquette. 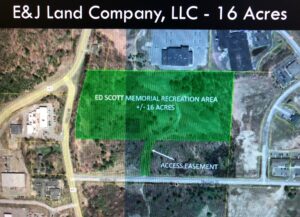 Local landowners Jim and Tonya Ross are behind the land donation, intending to honor Tonya’s late father, Ed Scott.  As such, the new facility would be called the Ed Scott Memorial Recreation Area.

So exactly what might be in this proposed recreation area?  An open meeting last Tuesday night was the first step in determining the content and character of the park.  Township administration, in an effort to get the community thinking about the possibilities, presented the plan as it now stands, with the idea that community involvement and activism will help decide what’s ultimately included.  Development will likely take place in phases, depending largely on dollars and desires.

16 acres is a sizable chunk of real estate, so just about everything’s on the table.  By comparison, the township’s Lions Park is just 2.5 acres, with a ball field, an ice rink, a playground, and a picnic area.

Initial ideas for what a new park might offer include pickleball courts, a dog park, disc golf, an outdoor amphitheater… to name a few.  Since the process is a “years long” thing, and nothing will be shovel-ready for quite some time, residents will have a chance to think about what they’d like to see in their park, should it become a reality. 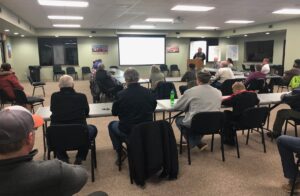 The way the land acquisition is being drawn up… a donation merged with a Michigan DNR Trust Fund grant, means that township residents won’t have to kick in for the property, but development costs are another thing.  McCarthy thinks there will be grant dollars available for certain features, but there may also be the need for specific fundraising.  Individual stakeholders, people voicing a desire for certain park amenities, may be asked to put some of their money where their mouths are.

Aside from residential growth and a pro-recreation agenda, the township’s business community is thriving as well.  Take a drive through, even off the main drag, and you’re bound to see something that wasn’t there last time you visited.  Retail-wise, there’s not much you can’t find there.  And a look inside the Westwood Mall would give you hope that the aging indoor venue might be on the cusp of a comeback.  And why not?  Going from store to store, where it’s warm and dry, will always hold a certain appeal. 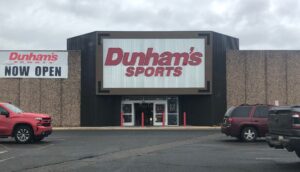 The township’s Cornerstone Business Park teems with a number of upscale office buildings, facilitating medical and professional services, which in turn promote more interest in the area.  Organizationally, a rejuvenated Downtown Development Authority is in position to cultivate commercial progress in a manageable and marketable way.

For those who go back far enough… we’re talking 50 years or so, Woodridge Grocery, now long gone, was pretty much the extent of the retail presence.  And as we know, change isn’t always perceived to be for the better.  But it’s hard to look askance at the evolution taking place in Marquette Township. 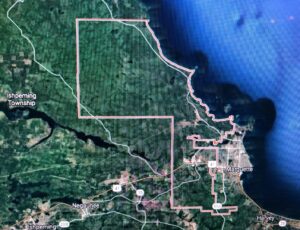 So, it’s official.  At least as official as these things can be.  Marquette Township is no longer just a few disparate shops and homes on the way up the road, but rather a burgeoning community, where the sky, and the township boundaries, are the only limits.  With the busiest stretch of highway in the U.P. slicing right through it, plenty of room for growth, and leadership that seems to understand how to manage popularity and prosperity, Marquette Township is poised to nurture its cultural and geographical influences, and further establish a reputation as one of the U.P.’s more desirable destinations.