“IT’S NOT A pipe dream. It’s happening. The building is being sold.”

That’s Ryan Engle, the business manager of the Masonic Center downtown, speaking publicly about a potentially huge story that’s flown under the radar for the last few months.

Here are the facts:

The Masonic Center, a three story, 65,000 square foot building located smack dab in the middle of downtown, is in the process of being sold by the Masons to a charitable nonprofit–a 501(c)(3)–now known as the Masonic Arts, Theatre, and Innovation Corporation (MATI).

“The Masons, with the downturn in membership for all fraternal organizations all over the nation, just can’t support the building anymore,” Engle explains. “We had to do something different.”

Different, as in opening it up to potential grants, and different as in changing its function in Marquette.

“We want MATI to become the creative hub for Marquette County,” says Engle.

There’s plenty of space in the building for theater productions and rehearsals, for art exhibitions, for any sort of creative endeavors, and for business innovators, some of whom are already using Campfire Coworks.

Engle says the Masonic, which has long struggled to establish an identity and fill vacancies, currently has about 15 tenants. Many of them already have an artistic inclination, but all current businesses, regardless of their type, will be encouraged to stay as the building evolves into MATI. The official changeover, he hopes, will occur on New Year’s Eve. 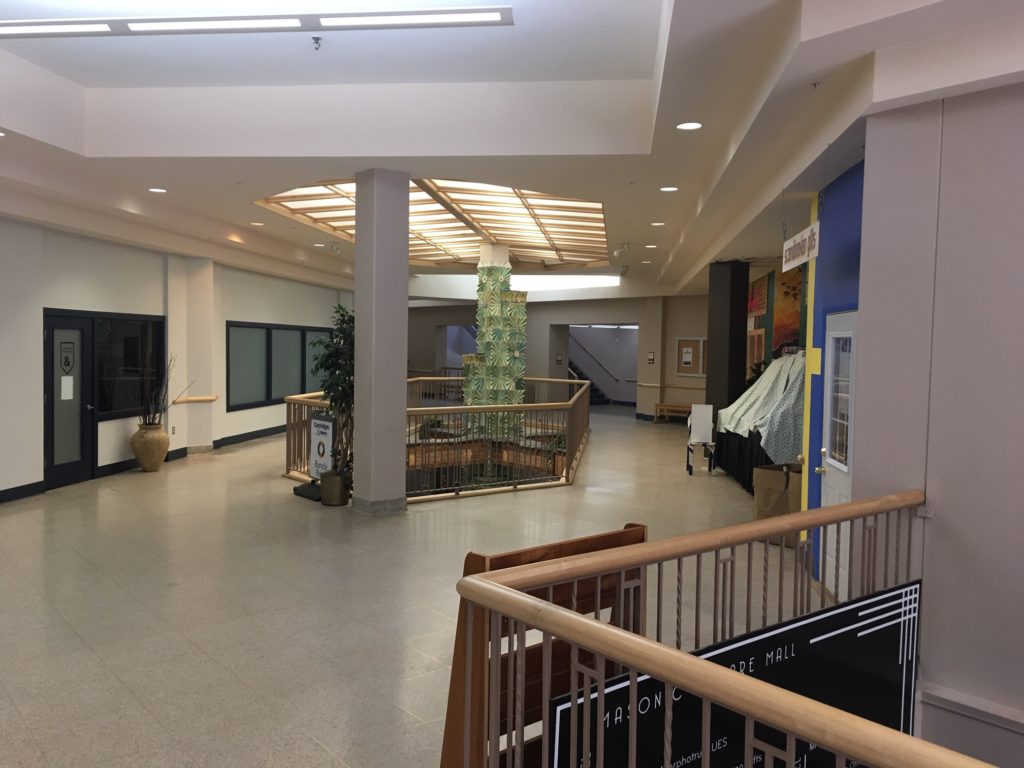 The Masonic Center sits in the center of downtown but until now, has lacked an identity and financial stability.

MATI has appointed five members to its board so far–Nheena Ittner, Nick Steffey, Kim Hegmegee, David Kronberg and Tristan Louma–with the expectation that two more will soon be appointed.

Finances? Engle says they have a financial institution lined up. What may delay the official change until the end of the year is getting federal approval for MATI as a 501 (c)(3).

Engle’s aware that there have been other arts-related projects downtown that just didn’t pan out (Remember the former Nordic becoming a live theater? And the plans for a jazz club?), but he insists MATI will not be one of those. The purchase has been agreed on with the Masons, according to Engle, and in fact, when the changeover occurs, the organization will still have a place to meet without the enormous financial obligation of owning a building.

Speaking of which, that’s a major part of the motivation behind this project:  the building itself.

“Developers in other cities are taking large buildings downtown and turning them into condos,” Engle says. “I’ve got nothing against condos but we wanted to preserve this as a community asset, a venue for the arts and creative community, and as a building that will support other businesses downtown.”

It sounds almost too good to be true.

But Engle insists it is happening, COVID or no COVID. If anything, the pandemic and economic downturn have allowed MATI more time to get their ducks in a row.

And come New Year’s Eve, Marquette’s creative community may have plenty to celebrate.