We told you a couple of months ago that representatives from Meijer, the superstore, were sniffing around, asking property owners in Marquette Township if they might be interested in selling their property.

The interest is still there. Meijer corporate officials won’t confirm it and so far Meijer isn’t dealing directly with the Township, but developers for Meijer are.

They want to expand to the Upper Peninsula.

In fact, the word is they want to build three stores up here–in the Soo, Escanaba and the Marquette area–so that it would then make logistical sense to locate a distribution center in the U.P. as well.

The first Meijer stores were opened in Grand Rapids in 1949. Now there are 200 of them in the upper Midwest.

If Meijer does move into the Township, as seems likely, it would pose direct competition to Walmart and Target.

A boxing match between box stores. Shoppers might enjoy that. 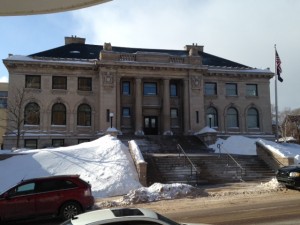 So we’re considered one of America’s most livable cities, but now Peter White Public Library–our beautiful, prized edifice chockful of books and services for the community–is shut down on Sundays.

And according to library director Pam Christensen, it’ll likely be closed on Mondays as well, come October when the new fiscal year starts. We’ll have a parttime, five-day-a-week library.

What the hell happened to our All-American city?

It’s complicated, but when you break it down, you come face-to-face with something called the Tax Tribunal. It’s a seven member group based in Lansing consisting of attorneys, assessors, real estate appraisers and CPA’s. They’re appointed by the governor and approved by the Senate.

Their job has been to handle the cases of business and property owners who feel their taxes are too high. Sounds reasonable, makes sense.

What happened, though, is that the philosophy of the Tax Tribunal started changing about five years ago. It became much more business-friendly, a reflection of Governor Snyder’s views.

We’ve got two prominent cases here that exemplify the change. The Tribunal recently approval a substantial reduction in Duke LifePoint’s taxes, which in turn resulted in the loss of revenue for the library. And the Tribunal is now considering a huge reduction in We Energies’ tax bill. If that’s approved, well, good luck to all of us.

The most noteworthy and far-reaching change, though, is the so-called “dark store” issue. The Tribunal has bought into the legal argument that it’s appropriate to tax an open and prosperous store (like Lowes) at the same rate it would tax a closed and defunct store.

That’s great news for the businesses but potentially catastrophic for local governments and agencies that depend on those property taxes.

You can argue, as some officials have, that municipalities and agencies have known about this potential problem for a couple of years and should have been preparing for it, but the fact remains that the tax-cutting changes mandated by this seven-person board are revolutionary.

If they continue unchallenged, property taxes on businesses will decline, and government revenues will shrink. Governments will shrink. Many conservatives will applaud that for philosophical reasons, and they’ll contend that lower taxes on business means more businesses will open and hire employees, the economy will expand, and tax revenues will therefore soar. And everybody will live happily ever after.

But until then, Marquette Township will be distributing less money to county schools, Marq-Tran, the library, senior services, search-and-rescue, recreation programs and to the fire department and the sheriff’s department.

Services will decline. We’ll have to adjust.

Can we do anything about it? Options are limited:

2) We can hope that the state supreme court has a change of heart and overrules  the Tax Tribunal. Good luck with that.

3) We can hope the state legislature forces some changes. Good luck on that, too. Senator Casperson (R) and Representative Kivela (D) tried last year but couldn’t get their bills out of committee. They’re trying again this session.

4) We can threaten boycotts of businesses (as some have suggested) that are getting their property taxes reduced. But do we really want to do that? Any business in its right mind wants its taxes cut. The problem is not with the businesses, it’s with the Tax Tribunal.

5) Elections. That’s the way our nation works. You don’t like the policies of an ominously named, remarkably powerful seven member board? Well, then, change the people who appointed them to their positions.

In the meantime, think good thoughts about our library. Christensen (with some hyperbole), says it could soon be on life support.