It was one week ago today when we first reported that Karl Bohnak would be leaving TV6.  And possibly others as well.  And now this well-documented story about vaccination mandates and on-air talent departures has taken an even more serious turn with Sarah Blakely’s recent Facebook post explaining, as best she could, everything behind her decision to leave, or be forced to leave, TV6.

While Bohnak’s only apparent reason for ending his reign as the market’s most prominent weatherman was the vaccination mandate, and while we correctly thought Blakely’s reason was the same, there’s much more that’s been happening… “behind the scenes.”

And spoiler alert… none of it is good. 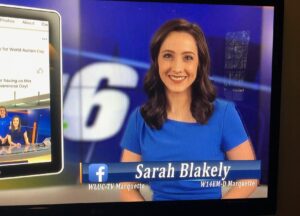 According to Blakely, she was the subject of many months of sexual harassment at the hands, and mind, of fellow newsroom staffer Shawn Householder.

Householder, who left the station earlier this year without much fanfare, had a couple of separate runs at the station, most recently as a news anchor on sister station Fox UP.  Word is that Householder, who’s no longer in the area, is being dealt with by law enforcement regarding his inappropriate, and possibly illegal, behavior.

Beyond the alleged abuser, there’s a victim… Sarah Blakely, dealing with a life-changing experience.  Beth Casady, executive director of the Women’s Center says workplace harassment is “stressful and painful, and can have significant health impacts.”  Although we didn’t see any of that in Blakely’s very professional on-air presence, apparently it was there.  In her post, she says, “I’ve cried at work more days than I can count.”

But Blakely’s painful experience doesn’t stop there.  It also includes her accusation that the powers that be at TV6 didn’t do enough to protect her from the abuse, or suitably punish the offender.  Casady calls that type of thing “trust in the workplace,” and it sounds like Blakely didn’t have it.

She indicates in her post, which has been taken down by Facebook, that she felt the problem was “mishandled” by those in charge.  Though she doesn’t mention names, we can surmise that station manager Rick Rhoades, past and present news directors Steve Asplund and Andrew LaCombe, and likely some corporate higher-ups from station owner Gray Television, were somehow involved in any disciplinary process.

It’s also likely that there’s something in the company manual that outlines how to deal with accusations of inappropriate behavior.  It didn’t take them long to come up with a vaccination mandate.  Sexual abuse has only been around since… forever.

Reasonable people can disagree about those vaccination mandates, but there can be no disagreement about workplace harassment, sexual or otherwise.  It’s unacceptable.  But one thing that must be acknowledged here is this… there are two sides to every story.  And because the folks at TV6 are hamstrung by an industry standard gag order, we’re only hearing one side, Blakely’s.

We haven’t reached out to hear Shawn Householder’s take… and we won’t.  Regardless of “innocent until proven guilty,” it seems like there’s enough smoke here that there had to be at least a little bit of fire. 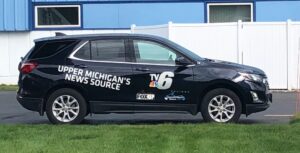 On a personal level, this is a difficult story to cover.  While I try my best to be fair, I still have to report the facts as I know them, and share an opinion if I think it helps shape the story.

Like many of you, I’m familiar with most of the people involved in this. Rhoades, Asplund, Lacombe, Bohnak, Blakely.  They’re valued associates, acquaintances, friends.  Except Shawn Householder.  He’s not my friend.

So, for the well-intentioned people involved, let’s hope this story takes another turn, towards some kind of equitable resolution.  Careers… reputations… lives… none of them should be ruined by a situation that arguably ran off the rails, even while good people were at the controls.

The sexual harassment element has complicated an issue that was initially just a policy disagreement, and Blakely’s accusations absolutely require a response equal to their level of severity.  Assuming that takes place in a timely fashion, maybe those of us who have been keeping this story alive can step back and let the process play out how and where it should… not social media.

In most industries, the comings and goings of employees happen without a great deal of public discourse.  But when well-known local TV personalities are the protagonists, it’s going to be news.  It comes with the territory.  But that doesn’t make it any less personal to the people involved.  While we watch it happen on our 2d computer and television screens, there are real people involved, living 3d lives, and we can’t forget that.

Bohnak, as noted in a previous post, has other interests and now has the time to pursue them.

Blakely, who indicated that she’s staying in the area, saying in the post, “I’m not going anywhere,” needs our support, and her privacy.  We can do that.

Though they may have done everything by the book, it’s probably a good idea for the folks at TV6 to re-examine how they respond to such incidents, and I’m confident they’ll do it.  Blakely accused an unnamed manager of calling the handling of the Bohnak departure as “just a blip.”  Whether that’s what was said or not, it’s certainly no longer a blip.  But neither is it a death sentence.  Shawn Householder can be thankful for that.

A week from today, this story might be bigger, or on it’s way out.  Let’s hope for the latter.