Moving IN and Moving UP

UNLESS YOU’RE INTO SOME serious window peeping, you may not have noticed the happenings at the former First National Bank Building along Front Street in downtown Marquette.

Now called the Kaufman Block, this 80,000 square foot facility has most recently been the home of Flagstar Bank, Travel Marquette, a couple other commercial operations, and a lot of empty space.

It was back in January of 2021 when the Veridea Group purchased the building and announced plans for renovation of the nearly 30,000 square feet of space that had been vacant for years, with a couple new tenants already lined up.

You may remember a few years back when that facility was a busy hub for the First National Bank of Marquette, and then subsequent financial institutions, including MFC, Wells Fargo, and now Flagstar.  As the back-end banking operations moved elsewhere, or simply became obsolete, this prime downtown office space went dormant.

But, as of just this week, that’s all changed.  As promised when they purchased the building, Veridea has returned the facility to its previous vibrant self, with several area entrepreneurial organizations already moved in and going full-steam. 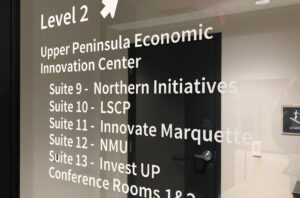 New tenants, ready to roll together in downtown Marquette

The idea is to bring all these collaborative partners together under one roof to better offer the new wave of entrepreneurs the services and support they need to get their dream off the pillow and on to the street.

Joe Thiel, the man in charge of Invent@NMU and Innovate Marquette SmartZone, says, “It’s been a long-held vision of ours to bring those of us who are serving entrepreneurs and helping to grow their companies to the same place. From figuring out if an idea has legs, to funding a startup, to securing patents, to making introductions, the whole thing.” 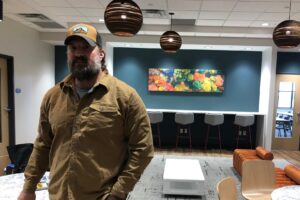 Alex Kofsky of Accelerate UP agrees.  “Joining forces under one roof allows Accelerate UP to amplify our ability to serve clients more effectively, efficiently and powerfully.  All of our organizations have always strived to work together wherever possible.  When EDO partners have time to be amongst each other, it creates space for us to discuss client, community and industry opportunities/challenges in a much more impactful way.”

It all sounds good, with a lot of fancy words common to today’s generation of tomorrow’s leaders.  The effort is commendable, and certainly in line with the current wave of new technology, but are there any results?

NMU student Henry Westlind is a good example of what the aforementioned organizations are doing to promote entrepreneurship in Marquette.  Westlind, partnering with another student, has created the world’s first, purpose-built, multi-use paddleboard and sea scooter. It’s just the type of high-tech, recreation-based project that Invent@NMU can help take from a napkin drawing to a store shelf.

Westlind credits Invent@NMU with helping bring his product idea to the real deal.  “We truly could not have gotten our idea to fruition, from a sketch to a working prototype, without the knowledge, resources, and connections Invent@NMU provides.”

So… why should we care?  Because Marquette is changing before our eyes, with young people moving here and bringing with them their dreams of working somewhere other than a cubicle, and living in an environment that will support, rather than suppress, their ambitions.  Heavy industry is not likely to provide the jobs we need around here.  Tech jobs… low, high, in-between, and often done from home, are going to be a driving force here for the foreseeable future.  We would be well-served to facilitate this industry… one which seems to co-exist nicely with our other big driver… tourism.

This new coalition of EDOs appears to be the right thing at the right time.  And who could argue with the idea of bringing more workers and clients downtown?  But it should be noted… none of these are new organizations. So, what about the facilities they’re leaving?  Are they just moving into a new building and abandoning another? 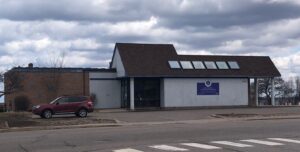 The home of LSCP… may soon be available

NMU owns the building at the corner of Fair and Presque Isle which housed a couple of these organizations and they’ll probably find a way to use that.  The one that stands out is the Lake Superior Community Partnership.  They’ve worked out of the modest building that overlooks the Founders Landing development since… since they were known as the Chamber of Commerce.  The city owns that building, and with that location, there shouldn’t be a problem finding a new tenant there.

Entrepreneurship is one of those terms being tossed around quite a bit these days. The folks running Campfire CoWorks in the Masonic Center have been encouraging startups for a few years now and there doesn’t seem to be any letup there.  Hopefully all these organizations can work together to make our area an attractive destination for the next generation of ambitious, creative, product and content producers.  And maybe… just maybe, our young people won’t have to go elsewhere to find the career that works for them.

Marty Fittante, CEO of InvestUP, says, “There is presently before the region a transformative opportunity.”  Yes, there is.  And that opportunity is knocking on the door, in downtown Marquette.