Not In My Back Yard

There’s a quaint little saying that goes… “If your neighbor has a wind chime, you have a wind chime.”  And of course, vice versa.  But wind chimes are usually pretty harmless, even delightful.  Now let’s up the ante to… “If your neighbor has a rocket launch site, you have a rocket launch site.”  Sending rockets into space includes implications far beyond those of tinkling chimes.  Maybe not quite as delightful.

Both scenarios present the opportunity for the NIMBY syndrome, represented by the familiar acronym that says… “Not in my backyard.”  Aside from wind chimes, NIMBYism is the bane of many projects that seem to have potential for the masses, but headaches and heartaches for the folks within range.

To be sure, NIMBYism isn’t confined to just backyards, or neighborhoods, or borders of any kind.  On a national scale, our country’s immigration issues are a good example of how NIMBY activism works.  Many people would like to see the refugees at the border have good homes, somewhere… just not here.  That’s NIMBYism.

Consider the current Spaceport rocket launch issue playing out between industrialists and environmentalists along the Lake Superior shoreline in northern Marquette County, on the Granot Loma property.  People within the immediate launch zone have a considerable investment, both financial and emotional, in the potential impact of this project.  Anecdotal evidence tells us that the most fervent opposition comes from those nearby residents and landowners… the ones in the site’s “backyard.”

But the advocacy group spearheading the launch site’s opposition contends that the backyard in this case is “everybody’s backyard.”  A creative twist on the typically localized nature of NIMBYism.

By definition, the further away you get from NIMBY ground zero, the less passionate the protests. The attitude is more like… yeah, we understand that sucks for you, but if it’s going to go somewhere, better your backyard than mine.

Yes, NIMBYism can often reveal things about ourselves we’d rather not acknowledge.

Other local projects impacted by the NIMBY syndrome include the recent proposal by the Catholic Diocese to establish a women’s recovery center on their property on Rock Street.  The idea was to use the residence adjacent to St. Peter Cathedral as a type of halfway house for women dealing with addiction and substance abuse.

The concept, seemingly another good project to be engineered by Catholic Social Services, was generally applauded, and supported by a number of area religious organizations.  Neighbors of the diocese… those in the church’s “backyard,” protested the plan, citing concerns about how the treatment center might affect their family-friendly neighborhood.  They didn’t suggest that the center shouldn’t happen… just not in their backyard. 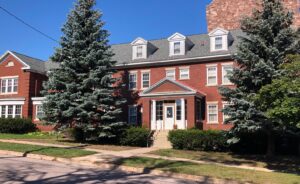 The Diocesan residence will remain so

The diocese has since dropped the plan, apparently deciding it’s better to keep the residence available to visiting priests and other guests. And the prospect of a public battle with the vocal NIMBYs likely didn’t sit well with CSS decision-makers.  In a recent article in the Mining Journal, the agency’s director indicated that they’ll look elsewhere for a site, presumably somewhere more suitable.  Wherever that might be.

A similar project, the John Kivela Recovery House, recently opened at 1718 Presque Isle Avenue.  It’s one of four facilities in the U.P. operated by the Great Lakes Recovery Centers, with a mission to “provide structure and support for those living in recovery.”  The house can accommodate up to six men and offers a program similar to what was being proposed by the Catholic Diocese in south Marquette. 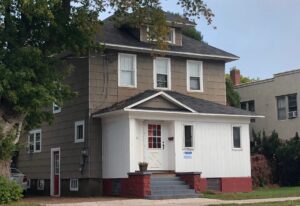 So where were the protests?  No real opposition to the Kivela House was reported and the opening went on as planned.  The project kind of flew under the radar.  Previously established zoning laws which allow for such an operation at that location would have taken some of the wind out of NIMBY sails anyway.  Plus, the area is already mixed-use, and just down the street from the Marquette GLRC office.  And it’s entirely possible that the Kivela name on the house helped facilitate public acceptance.  Many factors go into the NIMBY mindset.

The current NIMBY matter of concern involves an upcoming public hearing to review the special land use permit at Superior Culture on North Third.  Taking advantage of the pandemic and the growing popularity of outside service, the folks at Superior Culture developed their own “backyard” experience.  With kitschy, yet limited, indoor space, Superior Culture went through the proper channels and expanded outdoors…  with a big tent.  To the delight of area brews & beats enthusiasts, the new digs allowed for bigger gatherings and live music.

Bigger gatherings and live music.  What could go wrong?

Superior Culture’s hood is pretty high density.  The backyards aren’t very big, and it doesn’t take much to infiltrate the living space of nearby neighbors with lights, music, laughter, etc.  Just what you’d expect from an outdoor venue. 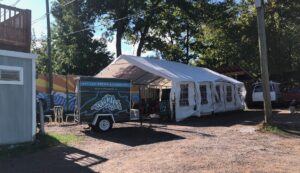 The city likely wouldn’t schedule a review of the land use permit without good reason.  Someone has probably complained, and it’s entirely possible that it’s someone who actually likes lights, music, laughter, etc.  Just not in their backyard.

The public hearing to decide whether or not to revoke the permit is scheduled for October 19th.  Superior Culture’s Facebook statement about the issue mentions all the positives they’ve done for the community, as well as the popularity of the outdoor setting.   And they’ve already gotten close to 1500 signatures on a petition of support.

It’ll be interesting to see how that stacks up against the forces of NIMBYism.

Today!  It’s Donuts Against Domestic Violence at Huron Mountain Bakery.  If you need a good excuse to pick up a pastry, this is it!
50% of the day’s total sales from both the Marquette and Ishpeming Huron Mountain Bakery locations will be donated to the Women’s Center.  Yes please!