Norlite’s Road Back from the Outbreak, and Munising’s Efforts to Cope with the COVID Scare

A RECENT BUMP in the road for the Norlite Nursing Center which has traveled a long, troubled journey this year.

A staff member recently tested positive for COVID after visiting downstate. She’s on quarantine, according to administrator Wayne Johnson, and so far, fortunately, no other employees or residents have tested positive.

Norlite could use a break.

The nursing home recorded its first case back in late March, and then the nightmare began. Twenty-six residents came down with COVID, eight of them died, and eight staff members also tested positive. Fortunately, none of them died, but for more than two months, Norlite, like many other nursing homes across the U.S., operated under a cloud.

It finally lifted in June, with no new positive cases recorded for several weeks, until this most recent one with the staff member.

“We just have to put one foot in front of the other,” Johnson says. “It can be intimidating at times but this is what we’re trained for. We have to take care of business.”

Business is down for Norlite–only 55 residents at this point, instead of the usual 75-80. Anderson cites two factors contributing to the reduced numbers: 1) fewer surgeries have been performed, meaning fewer patients would need nursing home care, and  2) with more people staying home, they’re now able to care for family members needing constant care.

Another likely factor? Norlite suffered a PR setback this spring with the outbreak, and that may have changed the minds of some prospective patients and their families.

But again, the outbreak was halted, and Norlite continues to take precautions–weekly COVID tests for both residents and staff, along with daily temperature checks and “smell” checks for all who enter the facility, along with answering questions about possible exposure to people outside the facility who’ve tested positive. Any new admitted patients are automatically sent into a 14 day quarantine.

No visitors allowed except in extreme circumstances–when a patient is deemed to be near “end of life.”

Seems cruel to keep patients away from their families. But crueler still would be another outbreak of COVID in a facility full of ailing, aging, compromised patients. 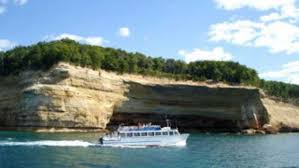 IT’S A STORY we’ve heard from businessmen and women in Marquette this summer–the tourists are here, and business is pretty good.

“It’s about as good as could be expected under the circumstances,” says John Madigan, the owner of Pictured Rocks Cruises.

Capacity’s been reduced on the boats, and all guests are required to wear masks, even when sitting outside.

For the most part, they’ve been cooperative–Madigan estimates 90-95% of those on board have no problems wearing the masks.

Something worth watching in the weeks ahead: COVID cases in Alger County so far have been almost nonexistent. Will the influx of tourists this summer change that? 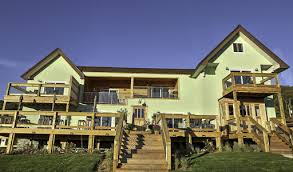 TOM DOLASKIE, WHO co-owns a handful of Munising businesses, paints a similar picture.

“The Roam Inn and Tracey’s (the restaurant) are doing remarkably well considering what we’ve had to deal with,” he says.  “It should be a respectable summer for us. Our guests seem to have a good understanding, a good mindset, about what we all need to do with the COVID situation.”

It’ll be a “respectable” summer, but he adds there’s no way it’ll begin to make up for a disastrous spring when much of Munising was shut down.

Eh Burger and the Hillside Party Store, two of his other businesses, are doing phenomenally well, he says, while the Gallery Coffee Company, the newest of his businesses, is struggling a bit. The coffee’s great–that’s not the problem. The problem is, they’d been trying to promote it as a nighttime concert venue and they were making headway on it until COVID hit. Now, the future of concerts, with mass gatherings, is, at best, uncertain.

The best laid business plans sometimes have to be scrapped, or at least altered.

One more thing during this scorchingly hot summer: Dolaskie says his hardworking kitchen crew at Eh Burger recently asked for some relief from the oppressive heat in the kitchen. They got it. Eh Burger installed a new air conditioner.

Small victories. We’ll take what we can get this summer.