OUTLANDERS, THE LITTLE takeout restaurant that’s moving from south Marquette to the building formerly occupied by the Panda Garden on West Washington Street, is now scheduled to open next month.

A dozen employees have been hired.

Original plans called for it to open in May. But, surprise surprise, construction got delayed. It happens on virtually every project.

Electricians and plumbers are still doing their work. City inspections to follow. A sign should go up soon.

Outlanders, at its new location, will offer extensive in-house dining as well as take-out. In fact, some of the dining will be “family-style,” with a big bowl or platter placed on the table for all to share.  They’re hoping to create a “homey” atmosphere.

The opening can’t come a moment too soon. That neighborhood, adjacent to the new hospital with major office buildings and a large hotel, is vastly underserved. Nothing but fast food. 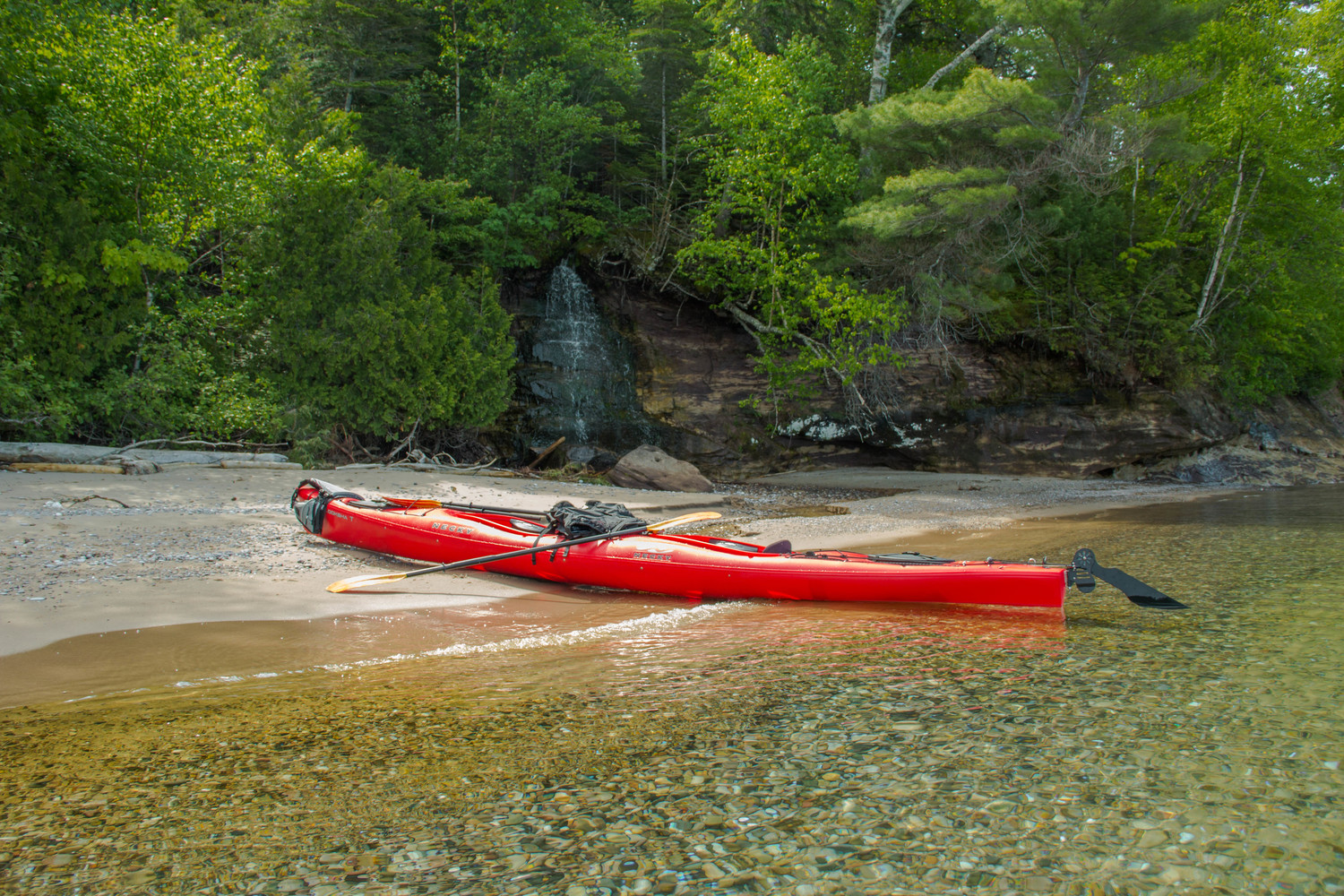 IS THERE A major kayaking market in Marquette?

One of them, Superior Kayaking, barely got their feet wet last summer with a very soft launch–mostly friends and family–shoving off from Presque Isle. This summer they expect to be busy.

A second company, TruNorth Adventures, will also be opening for business shortly. It’s owned and operated by Greg Andrews who used to work as an aide to Governor Rick Snyder.

Andrews could have stayed in Lansing and continued working in politics, but he said, “No, I wanna live in Marquette and work on Lake Superior.” Sell some fun, have some fun.

In the kayaking off-season (i.e. the other nine months a year), he’ll make a living as a consultant.

He’s got 25 kayaks ready to go, and he’s leased property adjacent to the closed-down Coco’s restaurant, which will serve as a staging area for TruNorth. He and his guides plan to launch from Clark Lambros Beach Park.

His website’s landing page is up, but the full website is not quite operational yet. It should happen within days. 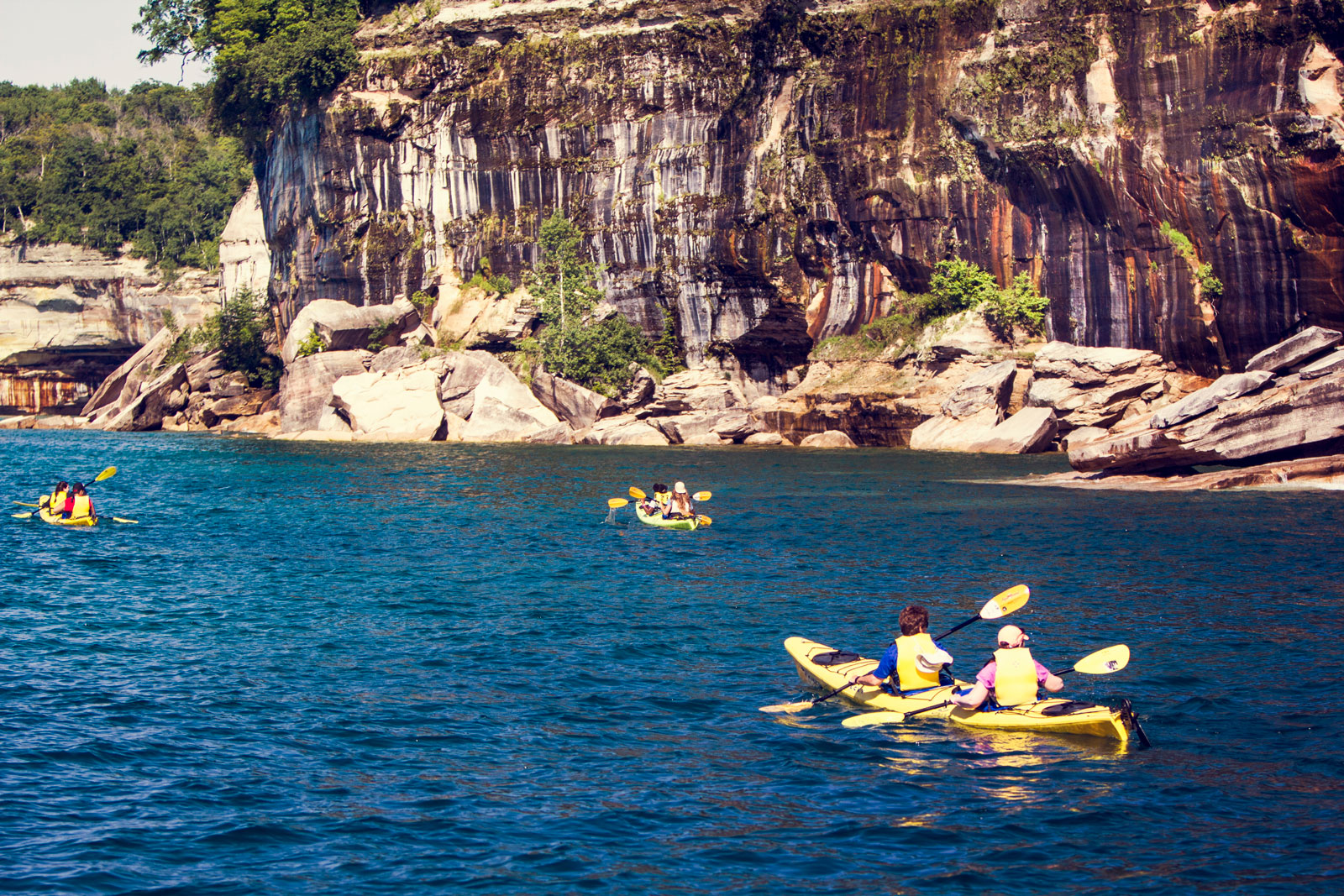 BOTH OF THE companies hope to emulate the astounding success enjoyed by Uncle Ducky’s in Munising over the last few years. What Marquette lacks, of course, is the incomparable beauty of Pictured Rocks. Presque Isle and the shoreline north of town are pretty but, honestly, they’re not in the same league.

On the other hand, they are located in Marquette. Plenty of hotels here, plenty of tourists. Many of them looking for activity and adventure.

On the OTHER other hand. Sometimes these boutique tourist activities just don’t work here. Remember the horse-and-carriage business from several years back?

Or the cruise ship that toured the coast of Marquette for a few seasons?

Cute ideas. We all loved them, but the season was just too short, and the business wasn’t there to make them profitable.

Maybe the kayakers can figure out the magic formula. 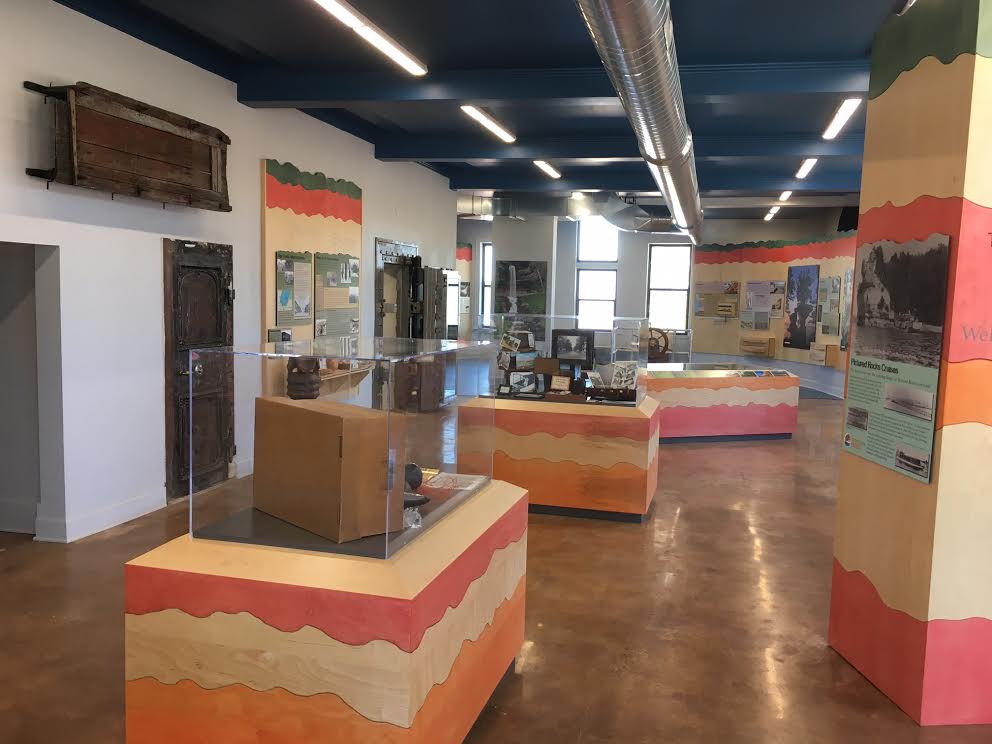 BY THE WAY, Munising has a handsome new addition to its downtown: an Interpretive Center–kind of a mini-museum that tells visitors about the history of Alger County. Fishing, lumber, business, Native Americans, Pictured Rocks and more.

Plenty of exhibits, along with a gift shop, and a captivating, gorgeous film produced by the talented Aaron Peterson.

All of this, along with the rehab of the building on M-28 and Elm Avenue, compliments of Pictured Rocks Cruises.

The building previously housed a bank and the city hall but for the last several years had been vacant.

And now there’s about 20 more buildings in downtown Munising that could use occupants. The town’s got huge potential. 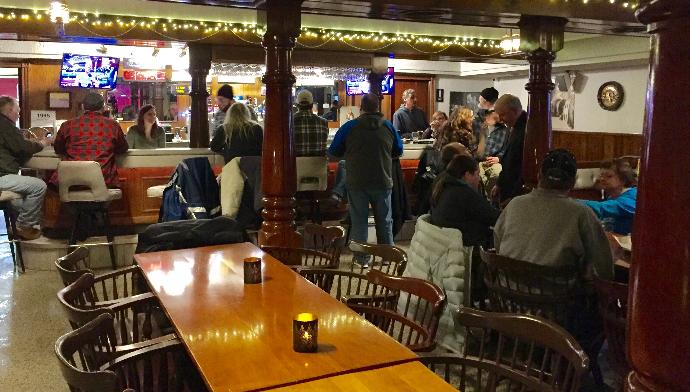 THE FATE OF Cognition, the highly regarded brewery in Ishpeming, is still uncertain.

Cognition’s owner, Jay Clancey, and the owners of the Mather Inn, which owns Cognition’s building, return to court later this month to try to resolve their financial dispute.

Cognition’s lease has actually expired. Which means, according to Clancey, that Cognition could actually be forced out if Judge Karl Weber rules against them.

What a shame, if that were to happen.

In the meantime, though, the doors are open, the taps are operating, and the beer’s being brewed. 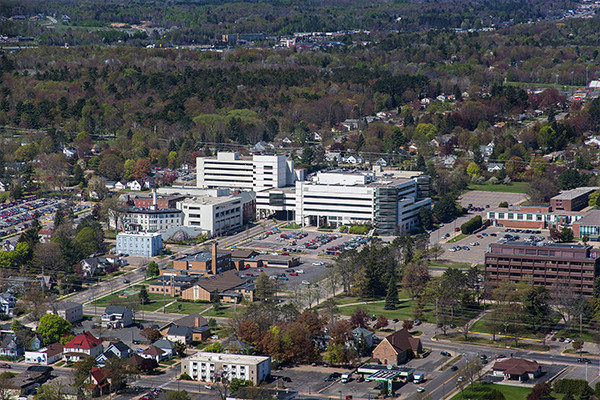 NOT QUITE SURE what to make of the latest out of UP Health System Marquette.

Two weeks after the hospital CEO told us they were finished with layoffs for the year, we get word of a 30 year employee being told her job was being eliminated last week. Walked out of the building.

A request made to the hospital for confirmation or clarification resulted in this reply:

“Per HR policy, we are unable to discuss any day-to-day personnel matters.”

So. A bit of a head-scratcher. 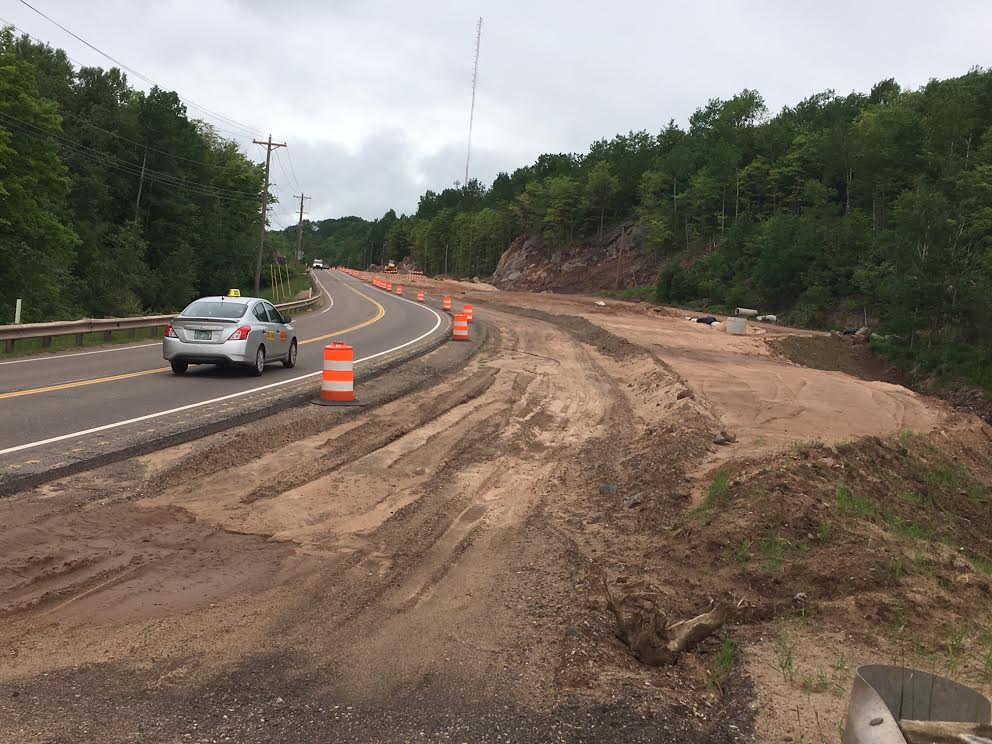 It was announced several months ago but the work just got underway this spring.

Three million dollars worth of straightening by the Michigan Department of Transportation. Over the last decade, there have been several accidents along that curvy stretch of the road, and officials decided this would be a good way to spend some money.

The job should be completed by late October. 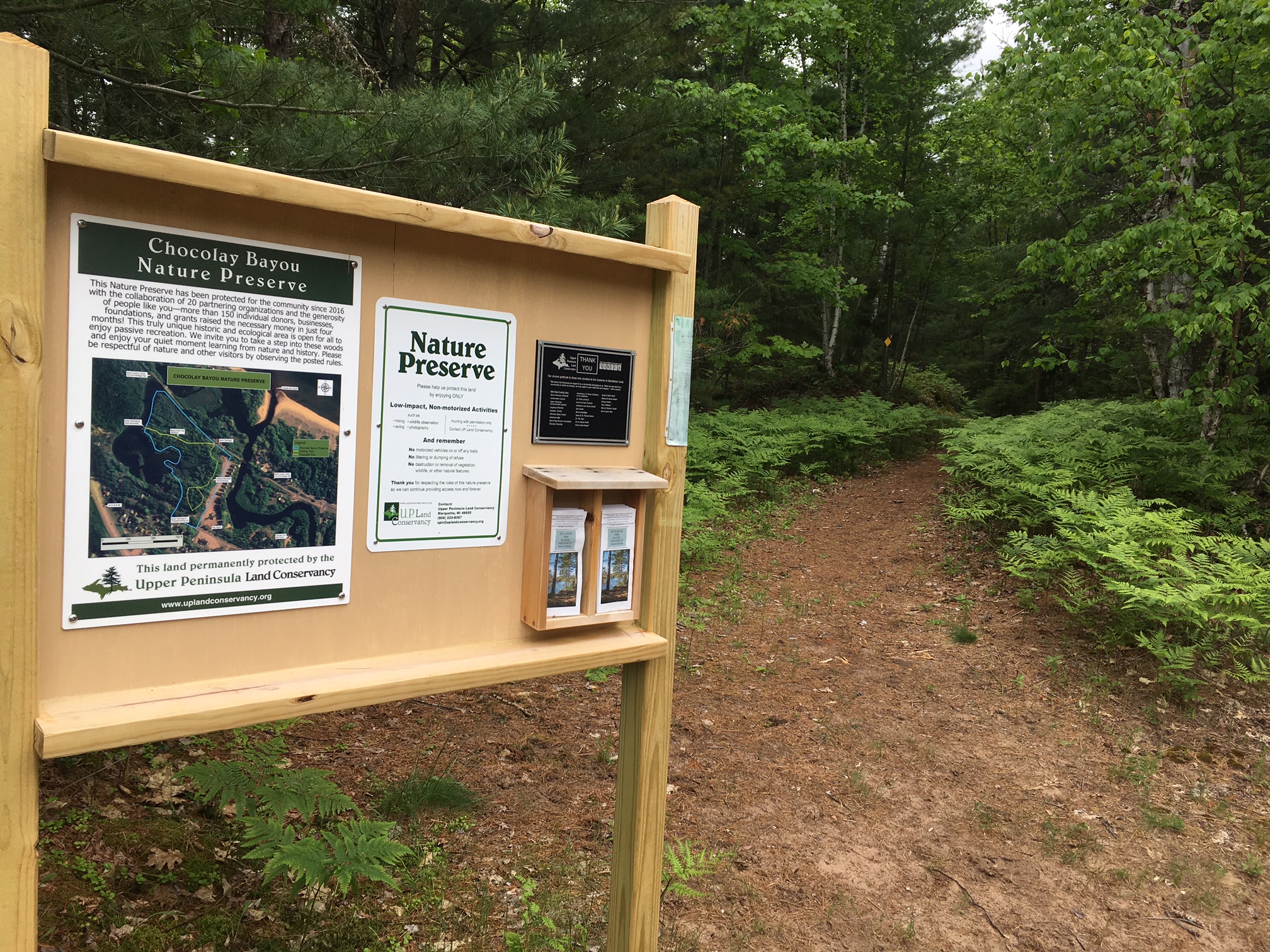 IF YOU’RE WALKING or biking along the Iron Ore Heritage Trail in Harvey, watch for this sign. It’s the entry into the brand new Chocolay Bayou Nature Preserve.

Thirteen acres of wetlands, pines, hardwoods, the bayou itself, and birds and critters of all kinds. Total serenity.

The Upper Peninsula Land Conservancy led the effort with 20 other organizations, along with numerous individuals, to purchase the pristine property.

A boardwalk was just completed on one of the trails. Fundraising will start later this year to build a parking lot for visitors, along with interpretive signs, and eventually maybe a dock on the bayou.

The Preserve won’t be bringing in any tax dollars, but it sure as hell makes this a better place to live. 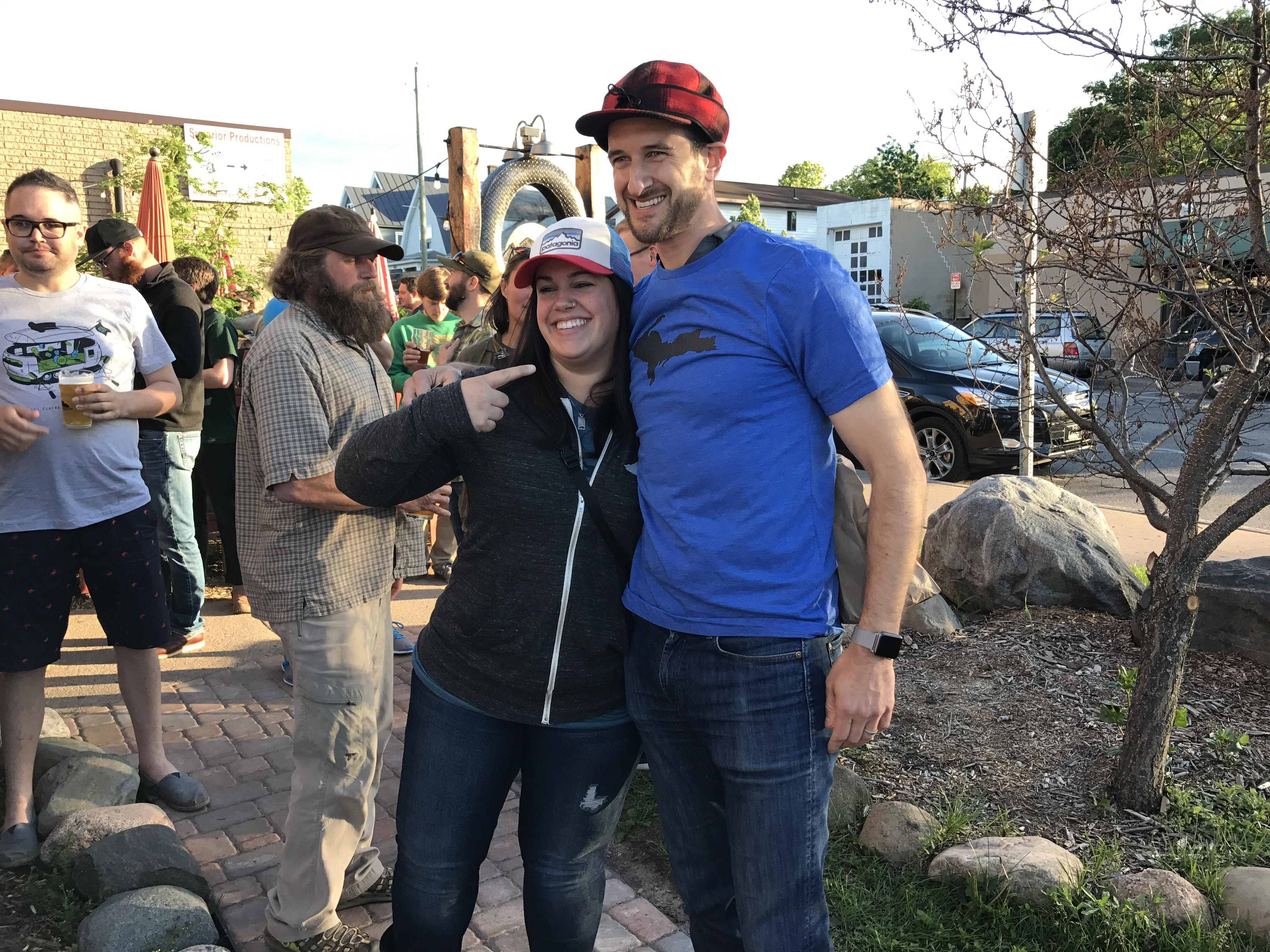 OH, THE POWER of social media.

TickPick, which sells tickets online to concerts, football games and such, learned a powerful lesson in the last couple of days.

Its website produced a picture of the United States without the Upper Peninsula. A common enough mistake. Happens frequently.

But when the site was notified of the omission Monday, one of their bright, young lads dismissed the correction, saying, in effect, “So what? The UP is nothing but forests, right? Hahaha!”

Big mistake. Reviews of their website started pouring in. Negative reviews. Their rating plummeted from 4.5 (out of 5) to less than 2.0 overnight.

On Tuesday morning, CEO Brett Goldberg apologized profusely for the careless response and said the company would rectify it. And then he went further.

He flew out to Marquette Tuesday, stopped in at Blackrocks, bought rounds of drinks for everybody (estimated cost for the evening: $2500-5000), wore a Stormy Kromer and a Yooper Shirt, and issued mea cuppa after mea culpa.