Pier 1 Questions, the New Brewpub, and Reason #172 Why We Love the UP

Nationwide, the store is struggling

But check the news from their corporate headquarters over the last few months, and there’s cause for concern. Sales are down, losses are up, many of their stores are being shuttered.

A couple of months ago, Pier 1 announced that about 140 stores were going to be shut down, including all of them in Alaska and Hawaii. Nothing more specific.

The Marquette store? “We really haven’t heard anything,” one local manager told us. She referred us to a corporate email site to get a response on possible closures. We haven’t gotten a response yet.

We have heard from several Pier 1 shoppers who’ve heard the rumors, see the big Sales! signs throughout the store, and wonder if something’s happening.

At this point, no, and meantime, it’s business as usual here in Marquette..

But things remain unsettled for so many retailers these days because of the continued booming growth of e-commerce (Amazon, et al) and the weakness of the bricks-and-mortar stores. Consider what we’ve witnessed here just over the last few months– the closures of Shopko, Office Max, and Gander Outdoors, along with the ever-shrinking Westwood Mall.

You gotta hope that some of these retailers will survive in spite of the worrying trends because many of us like the actual shopping experience–touching things, trying clothes on, wandering about, getting gift ideas and maybe even a little exercise. It’d be a shame, wouldn’t it?, if all that was replaced by us bent over a computer screen and keyboard.

A new choice for Negaunee diners and imbibers

LOOKS LIKE MAYBE an April opening for the Upper Peninsula Brewing Company in Negaunee.

That’s the word from owner and developer Jim Kantola. “We’ve hit a few snags but we’re moving forward,” he says.

Brewing equipment is being wired and plumbed, kitchen design is being finalized, the interior is being worked on. Chef and brewer hired.

The growth of microbreweries and brewpubs (offering food) has slowed somewhat in the last few years–there are now more than 7000 of them nationwide–but the economic impact has been substantial–$28 billion in revenue.

And according to an analyst, the greater growth for the breweries in the years ahead will occur in smaller towns. In places like Negaunee. 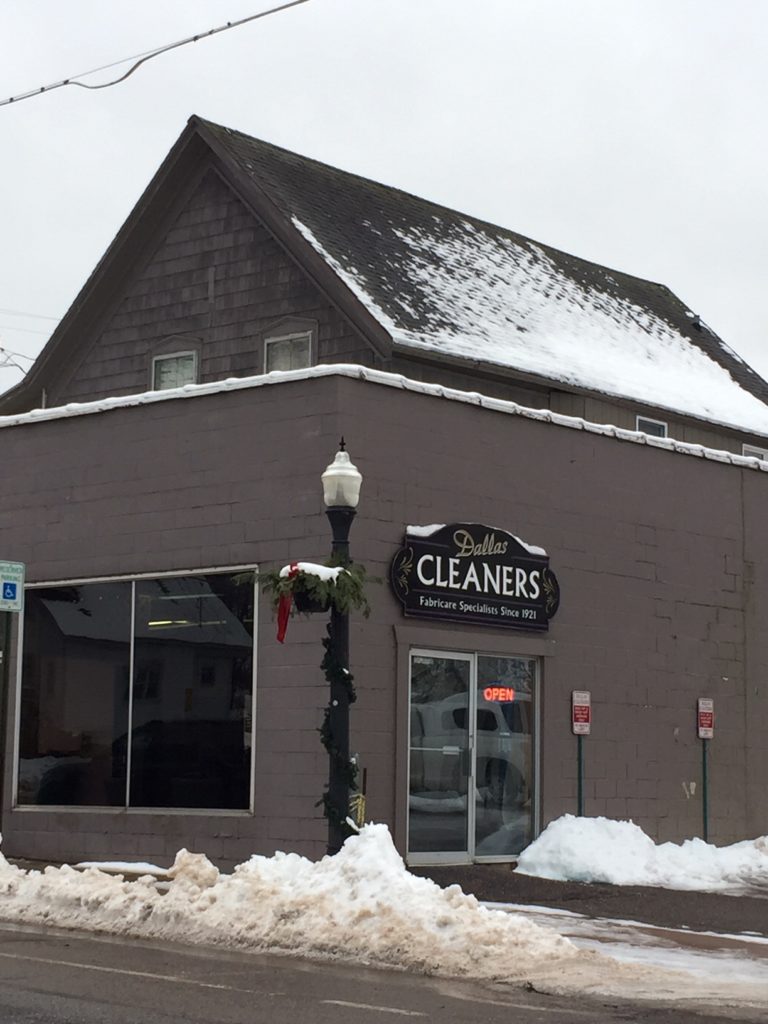 What can you do with an ugly winter coat?

“Can anything be done with this coat?” he asks the owner, Dan Dallas. “Can you get these spots out? I’m thinking they’re permanent and I may have to get a new coat.”

“Let me take a look,” Dallas says and disappears into the back room.

Minutes later, he reappears and hangs up the coat. “There. That looks better, doesn’t it?”

It sure does, but then Dallas notices a couple of other spots on the jacket. He returns to the back room.

A few more minutes pass and he returns. “I got those out and I also noticed that your zipper wasn’t working right, so I fixed that. It’s not perfect but it works now.”

He also ironed down the previously unsightly pocket flaps

The customer reaches for his wallet.

“Oh no,” Dallas says, waving off the cash. “It’s nothing. I hardly did anything. Just bring it in sometime when you want a good cleaning.”

Customer dons his revived jacket and heads outside into the snow, remembering again why he’s chosen to live here.