Police and the Protestors, and Bikes Flying Out the Doors

“We get it,” says the police chief

PROTESTS BY UP to 200 people on the streets of Marquette and in front of the Police Department over the last few days. Denunciations of the police by some in the crowd, even some harassment of the police by a protestor or two.

“It’s their right to protest,” he says. “We’re as outraged by what happened (in Minneapolis) as they are.”

But what about the criticism of the local police? Is that fair? Why a protest at the Marquette Police Department?

“It’s just easier to make their point in front of a police department,” Rieboldt says. “We get it. We’ve got no problem with it.”

He concedes that a few of the demonstrators may have gotten a little “rambunctious” as he put it, over the weekend, but he said it was clear that the protestors were doing their best to police themselves and keep the demonstration in line. As for the police, he says, they’re trying to avoid encounters with the protestors.

They are keeping an eye on the demonstrators as they move from street to street, but they’re not providing an escort.

Final question for Rieboldt: Have Marquette Police been charged with brutality in recent years?

Rieboldt: “Sometimes force is called for and we’ll use force but we’ll do it appropriately using the proper methods. We take great pride in how we deal with the citizens in this town.”

For now, no controversy here. An energized and outraged group of mostly white, mostly young protestors making their voices heard…and a small town police department hearing their protests–maybe even agreeing with them–while continuing to do their jobs. 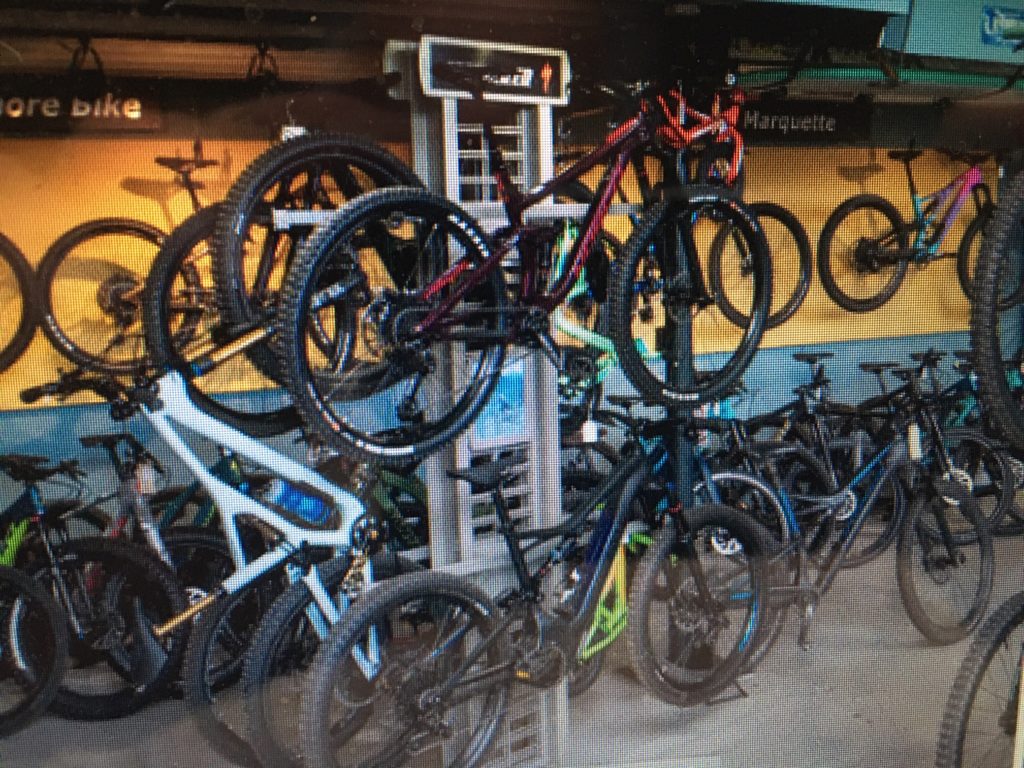 Not all businesses are suffering

“BIKES ARE THE new toilet paper.”

The words of Lakeshore Bike’s owner Matt Calcaterra. He’s referring to the scarcity of bikes after three months of the pandemic, when most of us were told to stay inside and only now are being mildly encouraged to get outside for walking, hiking and biking.

A lot of us are biking, and buying bikes.

“We’re having trouble keeping them in stock,” says Calcaterra. “We’re virtually out of bikes in the $400 to $800 range.”

It’s been a brisk business for servicing older bikes, as well, Calacaterra says. Orders are backed up one and a half weeks at this point.

Same story at Downwind Sports which sells bikes and other outdoors equipment.

“If Memorial Day weekend was any indication,” says co-owner Bill Thompson, “this is going to be a very good summer for us.”

That makes them very different from most other businesses in Marquette and across the nation, some of which might not make it until the end of the year because of the drastic economic downturn.

“People want to get outside,” says Thompson, “and that’s what we specialize in. Getting people outside.”

He says some people have pulled out their old bikes they haven’t ridden in 10 or 20 years, and now they want them tuned up.

The Downwind stores in Marquette and Houghton are open–with proper safety guidelines–and the newer store in Munising will be reopening later this month.

Another change for Downwind during the pandemic–more online activity and more deliveries.

“You have to adapt or perish,” says Thompson.

That’s a slogan most businesses will have to adopt this year.