Presque Isle Park, locally cherished as the crown jewel of the Marquette park system, is poised for another big season, welcoming residents and visitors alike. Though a car ride around the “island” is usually a great way to kill a half hour or so, the park has a lot more to offer than just what can be seen from inside a vehicle.  And while it seems this popular property is perfect in its simplicity, keeping it that way is not without its challenges.

Deeded to the City of Marquette by the U.S. Congress in 1886, Presque Isle has long served as the one sanctuary that has successfully avoided the dreaded over-development, in favor of keeping it as close to its natural state as possible.  Among other things, there was once a proposal by a resident to put a miniature golf course out there.  Thankfully, cooler heads, and a solid “pass” by the city advisory board charged with overseeing the park, saved it from that “enhancement.” 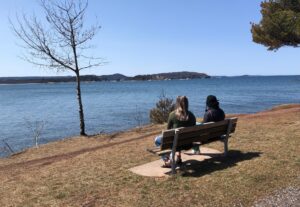 Enjoying the view off the west side of Presque Isle

No, Presque Isle Park isn’t a wilderness area like the thousands of acres available locally to those with a canteen and a compass.  There’s a road, multiple picnic areas, bathrooms, pavilions, concession facilities, a band shell, and the former Shiras Pool area… now the MooseWood Nature Center.

With a full 323 acres and the need to be user-friendly, a few conveniences tucked away here and there actually add to the experience.  Weddings at the gazebo, events at the pavilion, and regular concerts at the band shell only provide more reasons to visit Presque Isle and celebrate its particular charm.

And that’s before one even takes advantage of the natural treasures the island has to offer.  When the gales of November come early, you can start by watching, from a safe distance, waves crashing over the breakwall off the island’s southeast point. 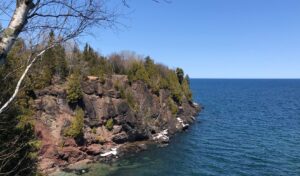 The look from the lookout

A few hundred yards in, along the one-way Peter White Drive, the strategically placed overlook platform provides a great view of the island’s striking rock face, common to much of the Lake Superior shoreline.

Looking for wildlife?  In addition to smaller forest creatures, you may see a white-tailed deer or two.  There used to be quite a herd out there, but back in 2001 a park management review indicated that the island couldn’t support the nearly 100 deer calling it home.  So, sharpshooters were brought in to cull (kill) the deer, after they’d been lured to a bait pile for what would be their last meal. 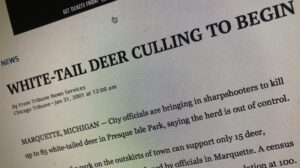 There should have been a better way

Not everyone, including a few city commissioners and more than a few residents, were in favor of the slaughter, but apparently the Parks & Rec director at the time… a taxidermist on the side, as well as some data-driven biologists, convinced decision-makers that the native flora (weeds) was more important than Grandma’s weekly visit to feed the deer with her grandchildren.  With a little more creativity and determination, we could have done better than a sanctioned ‘Blood on the Rocks.’

Respecting the natural state of the property, one will see many downed trees, felled by storms or time, destined to provide shelter and sustenance to the unseen wildlife inhabiting the forest floor.  Designated hiking trails through the park’s interior give visitors the chance to appreciate the serenity of a walk in the woods, without ever leaving the city limits.

The road through the park is open to cars, bikes, and walkers… but closed to cars on certain hours and days throughout the week.  In some areas, closer to the island’s perimeter, one can see the remnants of a previous road which had to be replaced, before erosion made it unsafe for travel.  It should be a few years before the current road gives way to a similar fate, but Father Time and the waves of Superior are unforgiving and unstoppable.

Speaking of unforgiving, now would be a good time to point out the harsh and dangerous realities of Presque Isle, often unseen but ever present.  Those waves crashing over the breakwall?  Lives have been lost because of an underestimation of their power.  That’s why there’s now a gate that prevents a walk on the wall during bad weather. 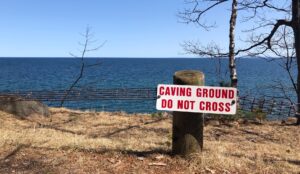 Exploring areas with steep cliffs or perilous rock formations can also be hazardous to one’s health. Warning signs are posted in appropriate areas, but a little common sense and constructive caution goes a long way.

That brings us to Black Rocks.  When you have a successful brewing company named after you, your popularity is undeniable.  What’s also undeniable is that jumping off those rocks is now the one thing visitors must do, or at least must watch, when visiting Marquette. 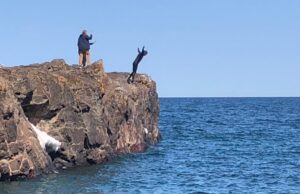 Combine that with the area’s surge in tourism and you have a level of congestion that Presque Isle is struggling to accommodate. Parking is limited, particularly in the immediate area of Black Rocks, but conversations with both residents and city officials suggest little appetite for new parking areas.

Presque Isle Park Advisory Committee chairperson Tara Gluski says her board has had many discussions about the impact increased usage has had on the island, but, while pointing out parking that is available, says, “The number of visitors to the park increases year after year and, if I’m being honest, I am more focused on protecting the park and its natural resources than I am on providing more parking to accommodate the increase in visitors.”

One city official cited the increase in enforcement of parking rules as one response that has helped, but it seems there might be a better solution than just writing more tickets.   Got any ideas?

The picnic area on the island’s west side gets a lot of use, depending on which way the wind is blowing.  It was noted that last summer there were picnic tables that never got out of the storage area at the old tennis courts, but staff shortages may have been responsible for that.  Regardless of why it wasn’t, it should be prioritized to make sure all picnic tables are out and ready for use.

The old Shiras Pool area is now under the green thumb of the MooseWood Nature Center.  The center complements Presque Isle with natural history and ecological programs for school groups, community members and general visitors to the center. 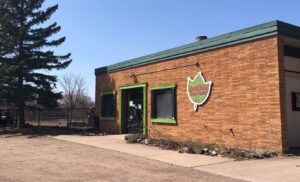 MooseWood board chairman Scot Stewart says that the center is very involved in bringing knowledge of nature to their visitors.  “We will continue to provide a variety of programs related to the natural history of Presque Isle including the bog, Great Lakes dunes and old growth forest.  We hope to develop some new partnerships with the community to expand these programs, like herpetology events involving frogs, toads and salamanders, and birds.”

The area needs a little TLC, but Stewart says they’re working on that.  “The plan we developed calls for about $250,000 worth of work to remove visible concrete at the pool, expand the area that is flooded, create hiking trails and boardwalks, and continue to landscape the area for wildlife, like pollinators and birds and native plant species.”

There was word on the street recently that the Band Shell was showing its age and may be facing an unfortunate fate, but a recent inspection of its structural integrity revealed that it is indeed salvageable.  Work on that is in progress. 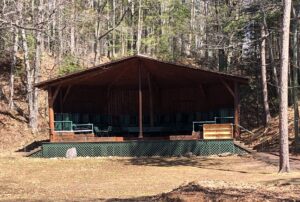 The Band Shell… a popular spot for summer concerts

According to Andrew MacIver of Parks & Rec, the docks that tried to float away a few weeks ago are back in place at the island’s marina, and there are a number of improvement projects scheduled for that facility this summer… as staff and supplies permit.

With guidance from the advisory board, the city is also looking at ways to improve the signage at Presque Isle.  According to Gluski, the goal is to have enough signs to provide important information without being too intrusive.  “I recognize the need for some signs to provide information to visitors, but I am a fan of having fewer signs to keep the park in as natural a state as possible.” 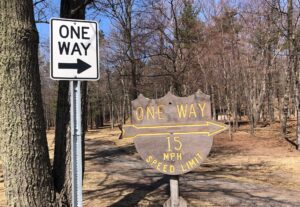 There are a number of open seats across the spectrum of city advisory boards, including the Presque Isle Advisory Committee.  Other than voting for commissioners who share your vision, volunteering to be on an advisory board is one of the most influential things you can do.  And much appreciated by city leaders.

For Presque Isle to remain a favored destination, it’s up to all city residents to assume the mantle of stewardship and sustainability.  While it will soon open to vehicular traffic for another singular summer, its future lies far beyond the vision of today’s caretakers.  In other words, enjoy… but be careful how you use it.