The NMU Foundation held two open meetings this week to allow Marquette citizens to voice their ideas and concerns regarding the development of the former Marquette General Hospital property.

Each session was well-attended, as expected, with citizens able to express their interests through a technologically based Q & A.  Using their smart phones, attendees were asked to respond to multiple-choice questions designed to identify those things they found important to the development, with results immediately recorded and posted on a screen in the meeting room. 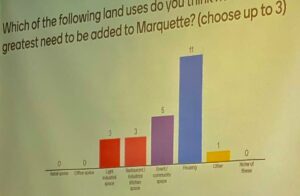 Allowing folks to take the floor and actually voice their ‘druthers in public settings like this often devolves into lengthy and misguided personal wish-lists that are neither probable nor possible.  Though some may have been disappointed they were unable to share and justify their ideas with the live audience, the phone-based information collection system allows the foundation to get a snapshot of what people are thinking and use that data to advise the project, without having to wade through the occasional pointless pontificating.

We’ve reported on the hospital property development previously and what it might mean to the city of Marquette, NMU, and the neighborhoods that will be affected by what happens there.  We’ve also acknowledged what appears to be an altruistic motive behind the efforts of the NMU Foundation to return the dormant acreage to a useful piece of property… and to the city’s tax rolls.

Though this rebirth of our hospital’s former home is still in its infancy, it’s heartening to see the effort by the foundation to include the general public.  We can reasonably hope that their intentions are honorable and that the development firm they select to take on the project is sensitive to the needs of the community, and not just their bottom line.

As this venture goes forward, Word on the Street will continue to watch its progress.  One of the conditions the foundation is requiring of the next phase is a “commitment to completion.”  Or, as we might suggest… the sooner, the better.

Also this week, the Marquette Board of Light and Power held an open work session to update the community on the status of the Shiras Power plant site on South Lake Street, and also gather ideas for what the community would like to see happen there.  BLP director Tom Carpenter explained how we got to where we are, exactly what parts of the property will be open for redevelopment, and what processes would be required for anything to happen. After that, the public was given the chance to weigh in.

The big question on the minds of most of the attendees was… will there be condos there?  Carpenter assured the crowd that condos, or any other commercial development, is not on the table, largely due to the agreements with the state regarding future use of the site.  If you weren’t there, you could probably imagine the collective sigh of relief.

So, if not condos… exactly what?  The skeptics among us might think that the BLP board already has plans for what to do with it and that the open meeting was nothing more than a dog and pony show, intended to make the citizenry feel like they actually have a say in the matter.

Well… from here it appears that the skeptics are wrong, and we actually do have a say in the matter.  Most of the meeting’s commenters were residents of South Lake Street, long frustrated with their picture-window view of smokestacks and coal piles, when a beautiful shoreline should be the focus.  But, having heard the BLP’s pitch, as it were, there was a detectable air of optimism in the room.

To no one’s surprise, most of the ideas presented during public comment had something to do with a park, including, but not limited to… a place to put a line in the water, picnic tables, an open grassy area, a dog park, etc.  You get the idea.  Anything but a commercial element that might take more of the shoreline from public use.

The city’s South Beach is adjacent to the property, and with that, the suggestion was made to just extend that beach area to include the new property and make it one big access point to the lake.  With any project being undertaken having some kind of cost, this seems to be something that would fit a limited budget, as all budgets are.

There was also the suggestion to build some type of community recreation center;  a building that would house a variety of indoor activities.  While that seems to be a contradiction to  the idea of “open space,” it was pointed out that such a facility would be available for use 12 months out of the year, rather than just the warmer months… or month. 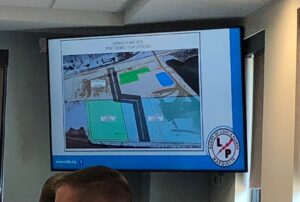 The main point being made by Carpenter as well as board chair John Prince was that the BLP is not in the business of developing property, but rather they are open to letting their available property be used for something that would be a benefit to the community.  A good example would be the River Park recreational property in north Marquette.

Just like the hospital property project, this is in its very early stages, but with Wednesday night’s meeting, the ball is rolling.  Overheard during the standing around period after the meeting was the idea of forming a group to address the BLP’s offer.  Good idea.  Call it the South Lake Street Shoreliners or something like that, and start organizing.

Carpenter also pointed out that there are still hoops to jump through with the existing state agreements as well as other procedural challenges, but the time has come to flip the switch and start the process of generating a plan.

It was back in 1977 when the city acquired a chunk of property previously used to unload coal for our power plants.  What used to be an industrial site which preceded any notion of “clean coal” is now one of the city’s most popular destinations… Mattson Lower Harbor Park.

Though the hospital property probably won’t feature much, if any, open parkland, the current undertaking to restore the area for future use should be welcomed by city leaders and residents alike.  Similarly, the BLP’s Shiras property should also be viewed as an opportunity to affect some positive change that will benefit both current and future generations.

Recent commercial and residential developments, particularly those that have altered our historic and beloved landscape, have not always been greeted with unanimous approval.  Of course, few things seldom are.  But, with both of the aforementioned projects being championed by groups open to community input, the opportunity is there… or here, to help shape what this city will look like as we go forward.  It’s an opportunity that should not be overlooked.