As another school year begins, thoughts turn to fall sports and the many Redmen and Redettes competing on behalf of Marquette Senior High School.  But the question still hanging, like a buzzer beating three-pointer is… are they still the Redmen and Redettes?

While use of the Indian Chief mascot logo HAS been discontinued and replaced with the simple block “M,” a variety of sources indicate that the traditional Red-based nicknames of both the boys’ and girls’ teams are still in use. 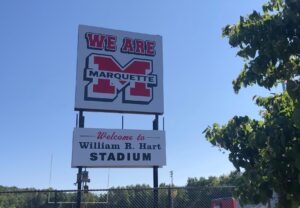 We wrote about this issue some months ago when it was a hot topic community-wide with passionate voices on both sides.  Traditionalists argue that there is no ill intent in the Redmen moniker while those hoping for change suggest intent is secondary to perception.

It appears that the current MSHS administration is straddling the 50-yard line on this one.  While references to “Redmen” have been scrubbed from various sites and venues, it still appears predominantly on the school’s online pep store, which features many options of Redmen and Redette apparel. 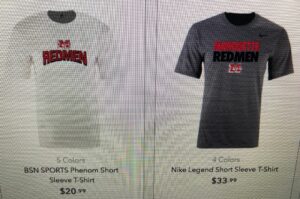 A survey was taken to help school leaders gauge popular opinion.  A slight majority favored maintaining the status quo but the election of two new school board members who seemed to lean toward change could tip the scales toward a new nickname.

It was almost a year ago when Word on the Street last visited this subject and there hasn’t been much movement since.  So it may seem like it’s an issue easier to avoid than address, and that’s likely true.  But what’s also true is that the administration has had its collective hands full dealing with Covid rules and regulations, many of those being determined, and defended, locally.

And if that isn’t enough, we’re also working with a relatively new school board president as well as an interim superintendent.  So the nickname issue may not be the most important item on Fair Avenue meeting agendas.  Kind of like… your lawn needs mowing, but your house is on fire.  Let’s put the fire out first and worry about the lawn later.

There’s also consideration of what might come out of the Michigan High School Athletic Association.  There’s a thought that some kind of directive from that ruling body might make the decision more of a bottom-line, rather than emotional, issue.  Though the MHSAA probably doesn’t have the authority to dictate a change, they can determine that schools in violation of their standards be eliminated from consideration for hosting state-sanctioned events.

The guess here is that if you want to preserve a part of your MSHS history, you’d be wise to visit that pep store and purchase your Redmen/Redette apparel while you can.  A similar issue in downstate Paw Paw ended in defeat for the defenders of the long-standing Paw Paw Redskins nickname.  Granted, “Redskins” seems somewhat more distasteful than “Redmen”, particularly when you consider that the Redmen name, according to some accounts, was originally a reference to the color of the school’s athletic sweaters… but once the discriminatory dominoes start to fall, it’s hard to stop them.

How about this… when the issue comes up again, and it will, let’s let the officials we elected, and the administration they oversee, make the decision we’ve entrusted them to make.  If they decide to go with a new nickname, so be it.  Maybe the community can come together on something we can all accept, and maybe even be proud of.  Maybe.

Have you seen the signs around town urging you to slow down?  They’re not the official speed limit signs, but rather reminders from residents that their street is more than a thoroughfare to your next destination.  It’s where they live, and play, with kids, and pets. 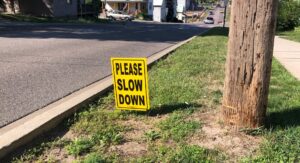 The speed limit on most Marquette residential streets is 25 miles per hour.  But any drivers training instructor worth his blood pressure pills will tell you that just because the speed limit is 25, that doesn’t mean you have to go 25.  In fact, responsible drivers know that the actual safe speed you should be driving depends on posted limits, as well as current conditions.

In many Marquette residential neighborhoods, where narrow streets are lined with parked cars and populated by families with kids and pets, the actual safe speed may be less than 25 mph.  If a kid pops out from between two cars, are you going to be able to stop in time to avoid a tragedy that could have been prevented?  Are you in such a hurry that you’re willing to risk the safety of innocent people and pets who may make one false step? 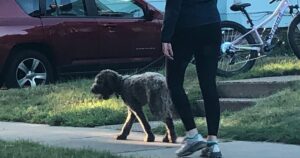 If we want to live in a community considered to be bike and pedestrian friendly, then we need to make a mental adjustment to the posted speed limits.  Taking the dog for a walk should be a relaxing exercise and not a test of survival.  Slow down.

After a Covid year off, we welcome the return of the Marquette Area Blues Society’s Blues Fest, for its 17th annual event.  Friday night features a FREE SHOW thanks to the Ore Dock Brewing Company and Honor Credit Union, with ticketed sessions Saturday and Sunday.  The festival promises a wide variety of food vendors, a beer & wine tent, free workshops, a large dance floor and assorted arts and crafts.  It’s another world-class event… right here in Marquette, thanks to a devoted local following of the blues. 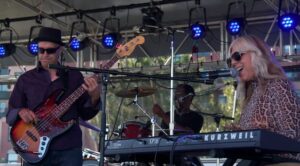