Running for Herself and Her Children

YOU LOOK AT Jill Leonard–tall and lean–and you might guess that she’s an athlete, and you’d be partially correct.

She’s now 45, married, a mother of three, a businesswoman who runs an insurance agency. But years ago, she was a basketball star. Her high school team won a state championship, she earned a scholarship to Lake Superior State.

She loved basketball. Running? Not so much.

“In college, they would make us run a timed mile for conditioning, and I dreaded it,” she tells you. “I hated it so much.” 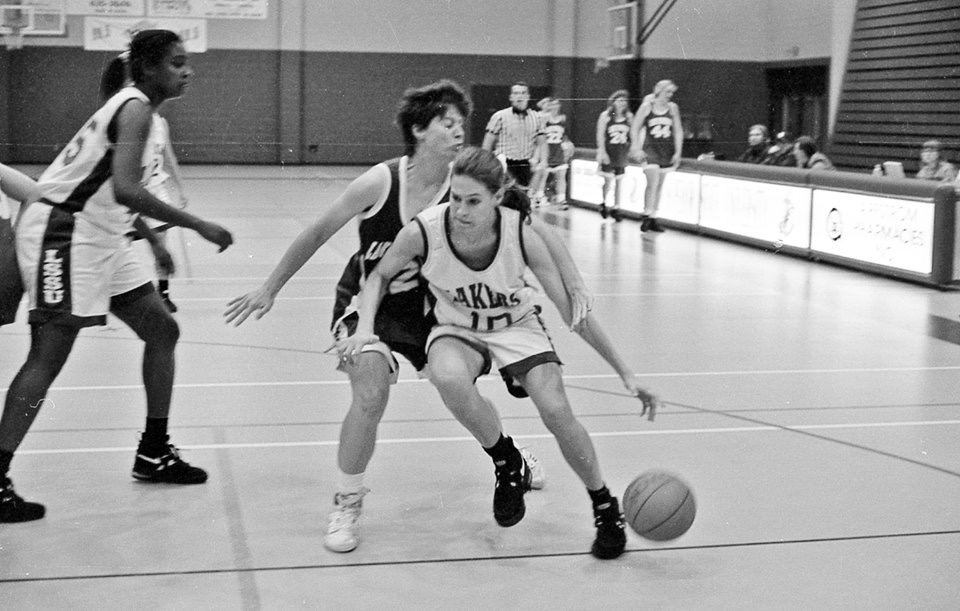 So fast forward 25 years, and you have to wonder how she ended up trudging through the 13.1 miles of the Marquette half-marathon just a few weeks ago.

Well, it started with a suggestion, a sip or two of wine, and then a fateful decision to do something totally out of her comfort zone.

For the last several years she’d been busy with work and raising three boys, so physical fitness had taken a back seat as a priority. Oh, there were a couple of 5K’s a few years back, and some occasional yoga classes, but mostly it was walking, sitting, driving, and working.

And then came one of her boys’ soccer tournaments in Appleton back in June. It was evening at the hotel, after the games, relaxing around a bonfire, with good wine and good friend Jill Chipelewski.

“We’re sitting there and having the best day and talking about things,” Leonard says, “and Jill leans over and says ‘I would really like to do the half marathon in Marquette, and I would like you to do it with me.’ And I’m like, ‘Yeah, I’m gonna do it!'”

There it was, out of the blue.

“I said, ‘Omigosh! Are we really doing this?!'” Chipelewski remembers saying to her friend. They were laughing.

Their husbands weren’t buying it. “They said there was no way we’d do it,” Leonard says. “In fact, they said, ‘We know you can’t! We’ve seen you walk, dance, drink wine, do karaoke, but running? No way!'”

Leonard, of course, had her own doubts–it was a mere ten weeks until the race–but she immediately got fitted with “cushiony” shoes at Queen City Running Company and took to the streets in her neighborhood. Two miles to start, and it was labored running…panting…walking…running….panting…..walking. Slow. Very slow. “It was not very pretty,” she says.

She ran in the morning, she ran in the evening, whenever she could fit it in during her busy days. Not great distances but slowly building up endurance while trying to ignore the ever present aches and pains. Sometimes her boys rode their bikes alongside her, offering encouragement to their mother. 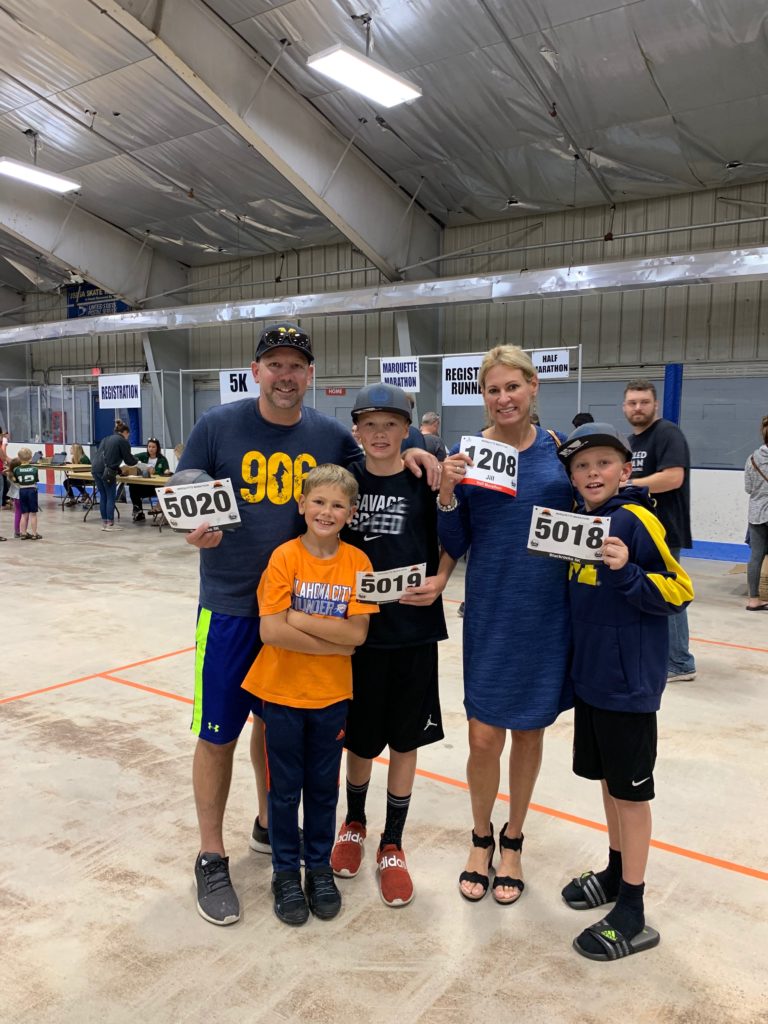 Jill’s husband Zach and their three sons supported her training. Zach and two of the boys ran the 5K.

“I ran in the morning by the Lake and I saw sunrises! They were beautiful!” she says. “How did I ever miss these?”

Race day approached. She had still not run anything close to thirteen miles, but the week before, her husband Zach and her father-in-law dropped her off, alone, in middle of nowhere, ten miles from their cottage in Wisconsin. And then they drove off.

She lifted her feet and started running, step after step. She struggled, she hurt, she doubted herself, but she plodded the full ten miles back to the family cottage. She was exhausted but ready, she hoped. 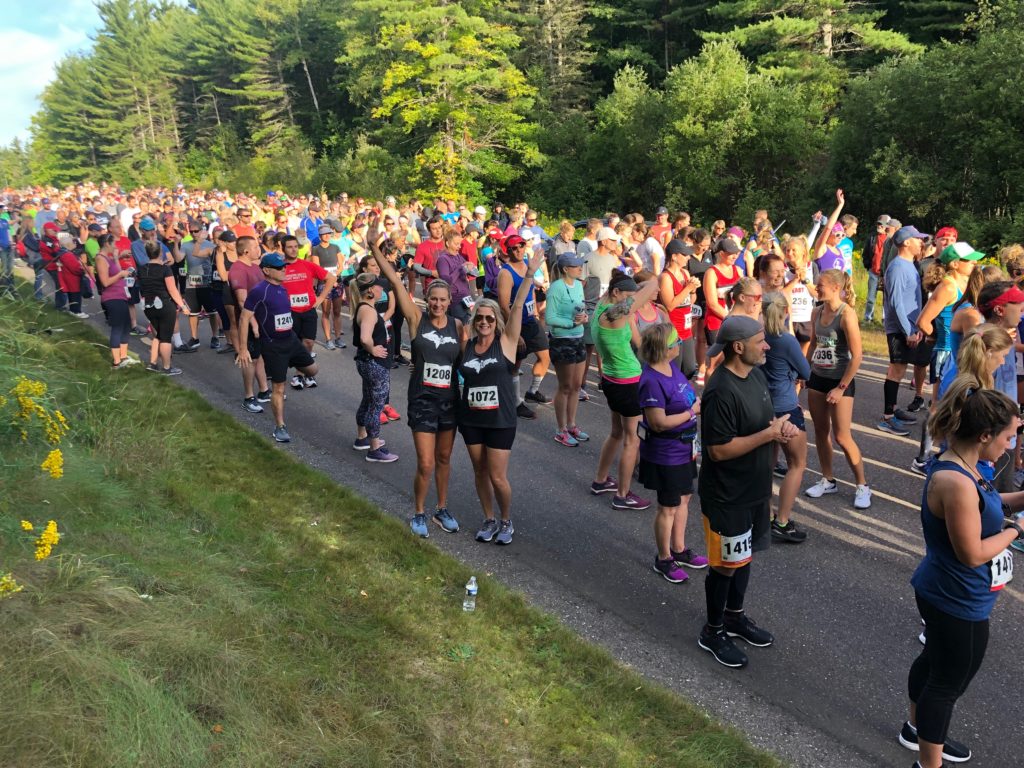 The two Jills, Leonard and Chipelewski, at the start of the race.

She and her partner, Jill Chipelewski–the friend who had first challenged her ten weeks before–matched up their iPod playlists and took off.

“We were singing together while we were running together, and every mile that we passed, we’d high-five,” Leonard says. “At four miles, we stopped just briefly to grab some water and stretch out, and then we continued.”

A few more brief stops along the way, but always together, soaking up the cheers, the shouted encouragement and the clanging bells of spectators along the way.

“At mile ten, my feet were cramping and heavy,” she remembers. “I felt like Fred Flintstone. My hips hurt. My mind was telling me to stop and quit. The sun had come out, it was getting warmer and we were going uphill. And then I  got a side cramp.”

But she and Chipelewski, side-by-side, continued to slap the pavement with their feet, one, slow, agonizing step after the other. Chipelewski, who suffers from plantar fasciitis had a particularly tough time but she had told Leonard from the start, “We’re not out to break records, Jill. We just want to finish the race.”

And then, two and a half hours after they had started, there was the glorious finish line. The cheering crowd, the proud husbands and children, the flowers, the medal. 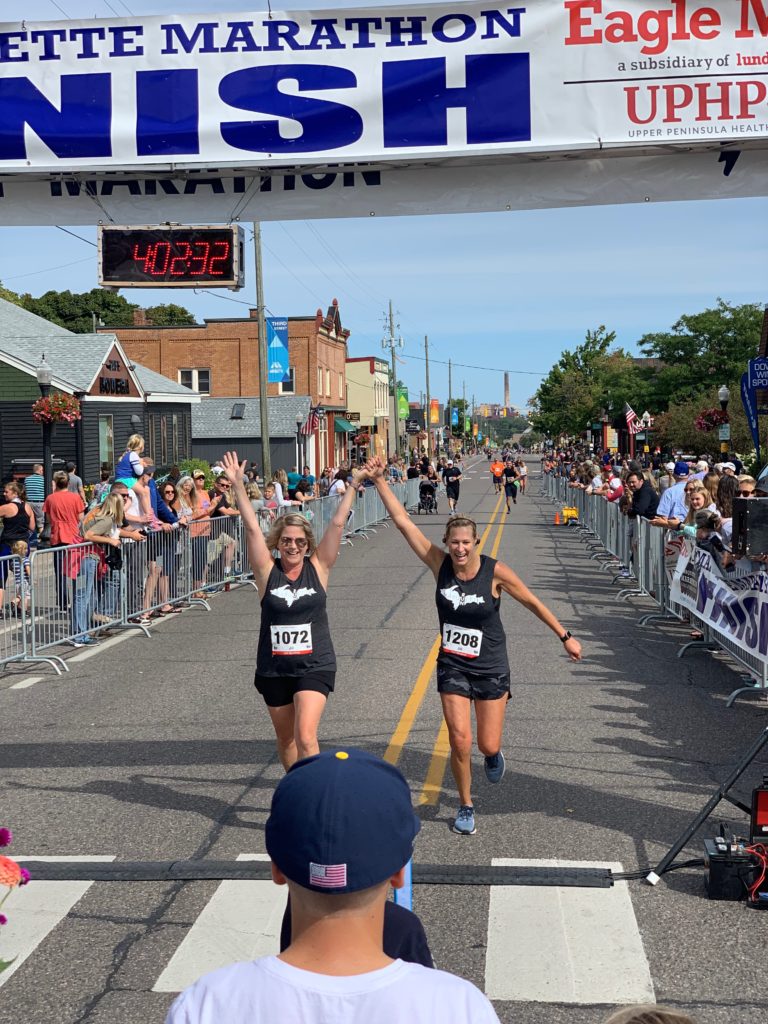 The two Jills started together, stayed together the entire race, and finished together.

“I had such a sense of accomplishment,” Leonard says. And then she gets to the deeper meaning of what she had endured. “I’ve always preached to my kids to get out and exercise but there I was at 45, and I wasn’t doing it, myself. Sometimes, the words you speak to your kids go in one ear and out the other. But when they see me struggling like I did, and setting a goal and accomplishing it, I think that really means something to them.”

Weeks later, she’s still smiling as she recounts the struggles, the pains, the doubts, the triumph. The utter unlikeliness of such an endeavor. She hated running!

“I try to say yes to things in life,” she says, “because I don’t want to miss out on anything.”