Monday, September 10th, 2001.  It was late summer, or early fall, in the Upper Peninsula.  Kids were back in school.  Adults were looking for ways to squeeze whatever was left out of our ever-shortening days.

After a contentious election the previous November, George W. Bush, still in the honeymoon phase of his presidency, was preparing for the following day’s goodwill trip to Florida.  His parents, George H.W. and Barbara Bush, would spend the night at the White House with Laura and the girls.  Pretty benign stuff.

The newsworthy happenings of the day were also fairly nondescript.  Just a Monday in September.

Nationally, Secretary of Defense Donald Rumsfeld announced that the Pentagon couldn’t account for 2.3 trillion dollars of spending.  Was anyone surprised?  (And as far as we know, they still haven’t found it.)

The ongoing saga of the disappearance and death of political intern Chandra Levy had been consuming the media for much of the summer.  Congressman Gary Condit was the focus of the story as it had been rumored he’d been having an affair with his 24-year-old office assistant, and was therefore a suspect in her death.  With not much else to focus on, the media pounced on the story and its salacious details.  To only Condit’s good fortune, weeks of intense coverage were about to come to an end.  One day later this story was an afterthought.

Locally, the Mining Journal headline was something about beach testing.  Not much has changed there.  We’re still testing the beach.  And there was a front page story about a music program at Bothwell.   The top story on the Journal’s Nation/World page was about how the state of the economy was taking attention away from education.  The events of the next day would take attention away from both. 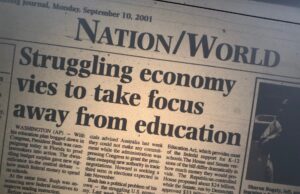 September 10th, 2001.  People were getting on airplanes without removing their shoes, while carrying a full 12 ounces of bottled water!  Large office buildings were open to the public.  People would actually walk right in and find their own way to their destination, unencumbered by security guards and identification checkpoints.

National monuments were open and welcoming.  Visitors were generally trusted and assumed to be harboring no ill intent, regardless of their appearance.

On September 10th, 2001, the grass was still green with fall colors on the horizon.  Football season was underway.  The holidays were straight ahead.  Nothing to worry about except the monthly payments on the house and toys. If not the best of times, it was at least in the conversation.

There hadn’t been an attack on our shared national confidence since the Oklahoma City bombing, some six years earlier.  And though that event alerted us to a severely underestimated domestic threat, it didn’t fundamentally change the way we lived our lives.  Security was beefed up at municipal and federal buildings, but other than that, life went on.  By 2001, we had settled into a comfortable, new-millennium groove.

Were those times entirely innocent?  No.  We had plenty of problems, as we’ve had since Day One.  But our world was certainly different.  Freedom of movement alone was something we enjoyed without question.

Oh, to return to those days.  Although we’d never want to give up the fruits of two decades of progress, there’s a lot about how we lived our lives, up to and including September 10th, that we would welcome today.

Without getting too sentimental, it’s important to acknowledge that there’s an ebb and flow to “the times.”  Back on 9-10-01 the flow was relatively good.  Our previous president had guided us through a reasonably peaceful and profitable eight years, with a misstep here and there.  The new guy seemed personable, fairly capable, and not likely to create problems where there weren’t any.

Distrust of people who looked or behaved differently was considered paranoia, not patriotic.  But then, after America was attacked, we were told…  “If you see something, say something.”  And just like that a new, new normal was upon us.

The more than 70 million Americans born in the 20 years since 9-11 will never know the world as it was on September 10th, 2001.  History books can recount events and consequences.  But it’s hard to chronicle the zeitgeist… the spirit of the time before the world changed. 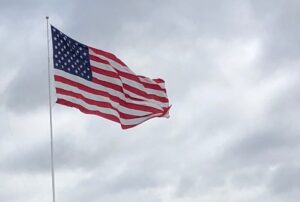 Thousands of lives were lost on September 11th.  But almost as tragic, we also lost an innocence that made life… easier.  Things are hard enough without having to suddenly, and seemingly without end, navigate a different, more complicated world.  One where trust in your fellow man is doled out sparingly, and with a measured amount of suspicion.

Today we lament the loss of life as we knew it prior to that day.  All we have left is the fading memory of a sense of security we took for granted, likely never to be seen again.