THOUGH PROGRESS HAS been slowed by the coronavirus, plans are still on track for the Honorable Distillery… a drinkery destined for the old Nordic Theater site, more recently the home of the Book World Bookstore at 136 W. Washington.

Owners Anne White and Scott Anderson are coordinating work on the interior to be ready to open when coronavirus conditions improve and life cranks up to pre-pandemic levels downtown.

So… another bar?  Well, yeah.  But whether you like it or not, nightlife, along with our natural attractions, is something visitors like.  And when done well, it helps bring them back. 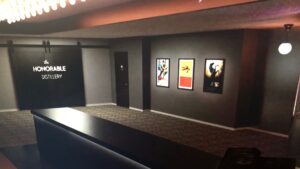 Artists rendering of the Honorable Distillery

And it sounds like this is going to be done well.  White and Anderson have some experience in the adult beverage game, but more than that, they seem to have a feel for what will work in the old movie house.  Offerings will include mixed drinks and wine initially as the proprietors work their way through the myriad Michigan rules associated with alcohol service to possibly serve beer as well.

There won’t be food service but White says they’ll work closely with downtown restaurants to make it easy for patrons to order food for delivery to the Honorable.

It was November of 2019 when Word on the Street first introduced our readers to this new venture.  When something proposed goes a couple of years without a payoff, we tend to doubt that it will ever happen.  But that’s not the case here.  White and Anderson own the building and have every intention to be a part of the thriving downtown landscape.  No opening date has been set, but hopefully it’s sooner rather than later. 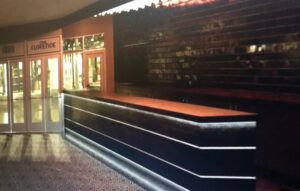 Artist rendering of the Honorable Distillery

With that big vacant space filled, downtown will be that much closer to optimum occupancy.  The old Muse building sat empty for way too long before the 231 West Patisserie moved in.  With the Veridia folks buying the former First National Bank building, currently the home of Flagstar Bank, we can expect good things to happen there.

There ARE remaining vacancies.  Across Front Street next to the Savings Bank Building sits an attractive storefront formerly occupied by Chocolay River Trading, and then there’s the vacant spot next to Getz’s that’s been empty and broken for far too long.

And of course there’s Upfront & Company.  It’s been almost 10 years since we enjoyed a bite, a bev, and a band there.  Rumors of a rebirth circulate every couple of years.  Along with the rest of the downtown resurgence, wouldn’t it be nice to add Upfront to the mix.

Words on the Streets

WE’RE TAKING IT to the streets, literally, as we look at some street improvement projects you can expect to see around the city this summer.

First and most noticeable will be an upgrade of the 100 block of West Washington.  The surrounding streets have all been worked on in recent years and now it’s the 100 block’s turn. 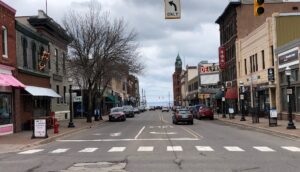 The 100 block of West Washington

According to City Engineer Mik Kilpela, “All of the sidewalks will be replaced as well as almost all the trees, and new trees will be added.  There will be a stamped concrete boulevard with brick pattern to match the rest of the downtown area.”

The street itself will be milled and resurfaced, which will cause a little disruption of accessibility, but Downtown Development Authority Executive Director Rebecca Finco assures us that the construction crew will be sensitive to the needs of the businesses and shoppers.

“Pedestrian access to Washington Street businesses will be maintained throughout the duration of the project, though traffic shifts will be necessary and on-street parking temporarily unavailable. It is our goal to minimize disruption to business operations and create a safer, more accessible Washington Street for all to enjoy.”

The project is scheduled to begin on April 26th with a projected completion date of June 19th.

Other street projects of consequence include various sidewalk repairs citywide, and total reconstruction of specific blocks of Pine, Hewitt, Front, and College, as well as a few others.

Maintenance projects will take place on parts of Norway, Grove, Pine, a couple of streets in Shiras Hills, the bike path, and Tourist Park. 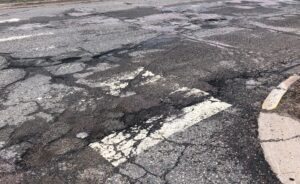 A city street in need of attention

If you wonder why some streets get fixed and others, often in seemingly worse shape, are ignored, well… there’s a whole bunch of factors that go into those decisions.  The factors are largely based on science, rather than emotions. In other words, city planners don’t rely on public opinion as much as widely accepted standards and practices.  As it should be.

And what about the potholes that sprout up every spring?  That’s another story and in fact, handled by another city department. While street maintenance and reconstruction comes from the engineering department, public works handles potholes.  Other than the investment required for the big fix, there’s not a lot that can be done to prevent potholes. You can thank our extreme weather for most of it.  Consider it a sign of spring.

A spring pothole, one of many to avoid

Finally, whatever happened to the big plans for Baraga Street?  You might recall a couple years ago the Downtown Development Association initiated an effort to look at what Baraga Street could become.

According to Finco of the DDA, “Our new City of Marquette Downtown Plan has provided some conceptual recommendations for updates to Baraga Avenue. These include narrowing of the driving lanes, widening the sidewalks, and adding amenities such as street trees, lighting, a bike lane, rain gardens and greenspace to make the streetscape more pedestrian-friendly and visually appealing.”

Part of that plan could include improvements to the 100 block of East Baraga, which would conveniently incorporate the new developments of Founders Landing into the downtown footprint.

For the time being, nothing is imminent.  Baraga Street development is on hold until funding becomes available.  Nothing new there.  But it’s nice to have a plan on the table.

To summarize… Marquette was on a roll before the pandemic.  It looks like we’re getting ready to roll again.