BC: Where were you born and raised?

JK: I was actually born and raised here in Marquette and I graduated from Marquette High School, and like many people of my generation, I wanted to leave so I did. In the early Eighties I went away to college. I first did a year at Northern, then I went away to California, to UCLA to try to find myself, but then I decided California wasn’t exactly the place I wanted to be, so I ended up at Michigan State where I graduated with a degree in telecommunications.

BC: And then you came back to Marquette?

JK: No, right after I graduated, I got a job at a TV station in Flint, and I was doing everything from production to promotion to selling, and there wasn’t much money behind it, the ownership changed, and it just wasn’t a very pleasant place to be. And in 1987, my grandfather died, so I came home for the funeral, and I started to realize, you know, Flint doesn’t have a big lake, Flint doesn’t have hills, Flint doesn’t have this or that. The only thing Flint had was a girl named Loraine (his future wife). So I decided I had enough of TV, and I had an opportunity to come back here and work at another radio station. So I took it. That job didn’t work out but thirty one years ago I got another job here (at Q 107), and I’m still here today.

BC: What were you like as a boy growing up in Marquette?

JK: I was a space nerd. I was a skinny, shy, non-athletic space nerd. But you have to realize this was late Sixties, early Seventies when the Apollo program was in its glory. There was just something about space that really attracted me. My dad’s mother lived in Houston. Her husband at the time worked in tech support for Mission Control so before every Apollo mission, they would send me these 200 page mission profiles. I counted down to the minute when everything would happen so I’d be following these things left and right. 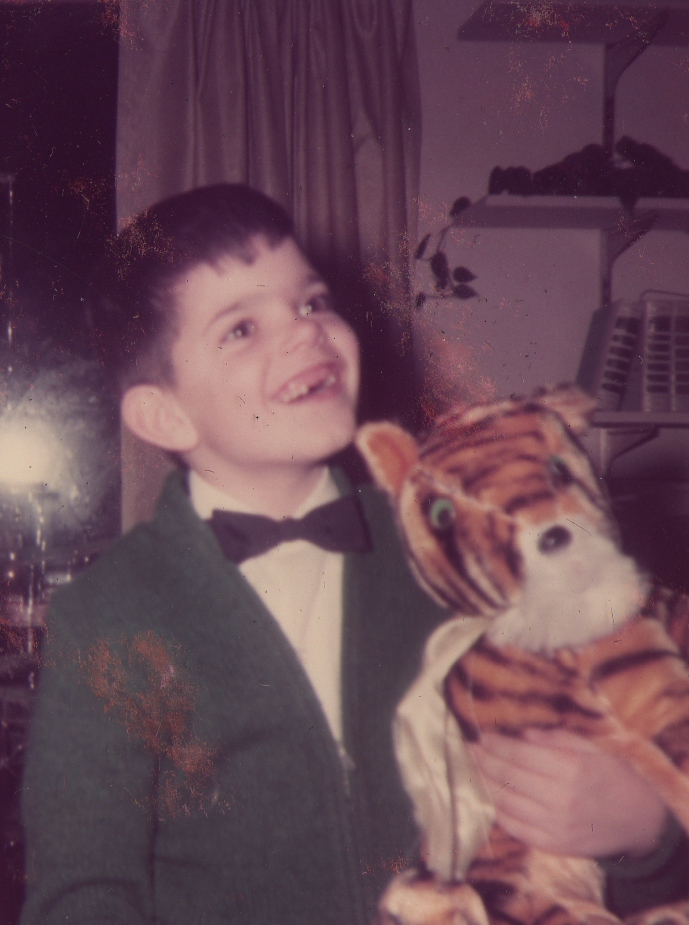 Koski refers to himself as a “toothless nerd” when he was a child. We have no idea what he’s talking about.

BC: Then you became a teenager. Still a nerd?

JK: I was still a space nerd but I was also a band nerd. I played the drums. Everybody has a talent in life–I apparently have two talents. I can bang two sticks on a drum.

BC: Did you ever play in a band?

JK: I didn’t play professionally in a band. In college, I filled in a few times in bars but I never had the urge to be a rock star.

BC: Did you go to Prom when you were in high school?

JK: Uhhhh…Did I? That might answer your question. (We laugh)

BC: Were you a “cool” guy in college?

JK: I don’t whether I’m the person to say whether I was cool but, like a lot of people, I re-invented myself. Because when you leave the town where everybody knows who you are and you go to different places, you can say to yourself, “Well, maybe I shouldn’t keep doing this or that” or maybe you just decide there’s another path you want to take or you find new interests and new friends.

BC: How did you meet your wife Loraine?

BC: How about the longer version.

JK: The long version is I was friends with her fiancé and I met her through him, and their relationship was just not working out, and they were in the process of breaking up. She did actually ask me out to go to her class reunion with her. And I didn’t realize at the time it was a “date.” I thought she just needed someone to go with her. 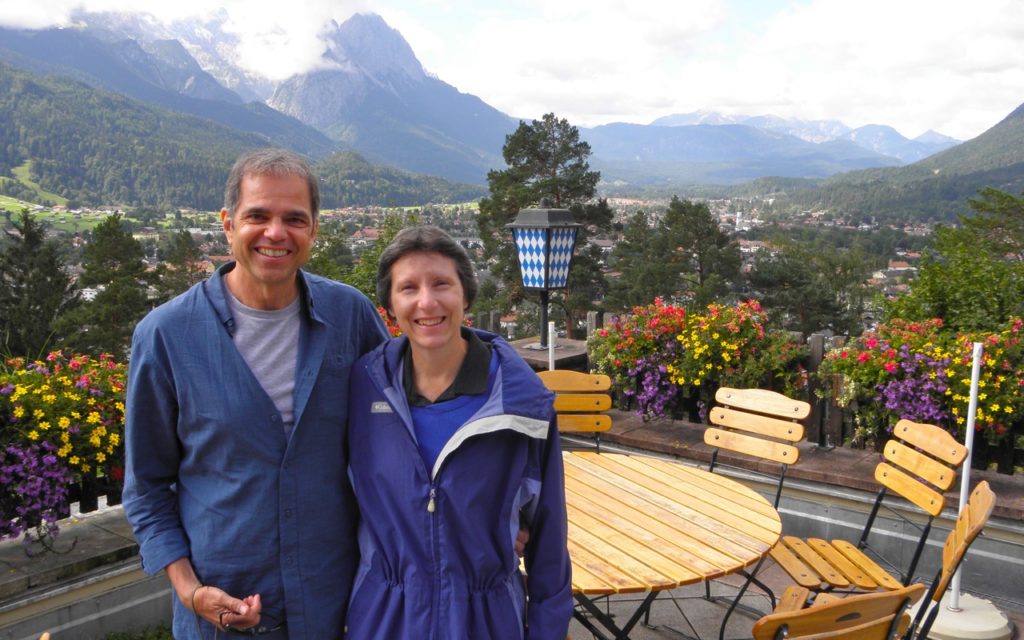 Jim and Loraine have been married for 30 years.

JK: Umm, we actually didn’t end up going to her class reunion. We had dinner at a Mexican restaurant in Saginaw. She drove ten miles to the east to show me the very small town from which she came and then we just went back to Flushing where we both living at the time, sat along a river and ended up talking for five or six hours.

BC: And you knew at that point?

JK: I had a pretty good idea. Because I knew Loraine previously, the kind of person she was, her outlook on life and the interests she had, and yeah, you get a good idea after a while.

BC: How long afterwards did you get married?

BC: So you met in Flint?

JK: Yes, her fiance and I were working together at the TV station, and then she got a job at the station about ten months after I started there. And so we and a couple of other people were always hanging out together.

BC: What appealed to you about her?

JK: She is the most strikingly independent woman I’ve ever known. She does not let anything get in her way. One of my favorite stories about her is she’s a natural athlete and she’s always enjoyed running. However, her high school did not have a girls cross country team at the time. So she literally made them put together a girls cross country team so that she could run.

BC: And then you two came back to Marquette together?

JK: No, I came back in January of 1988 because I had a job offer, but at that time, we kind of knew we wanted to be together. And then about two months later, she quit her job in Flint and moved up here. It was probably about a year and a half later that we got married here.

BC: What is it about Marquette that you like?

JK: There are a couple of things. First of all, there is the people. I cannot think of a group that’s more tolerant, friendly, welcoming, creative, outside-the-box individuals in the middle of nowhere. The people here are just something really special and it’s one of those things you don’t realize until you leave. And the other thing is the physicality of the place. When I was a kid, you go by the lake every day and you don’t pay attention to it. You see the ore dock and you don’t pay attention to it. You trudge up the hills and you say, “God, I gotta climb up these hills again!” But then when you move away, you realize that not every place has a lake, not every place has hills or an ore dock. You come back and look at it, almost through the eyes of someone who’s never been here before. Then you realize this is really an amazing place. 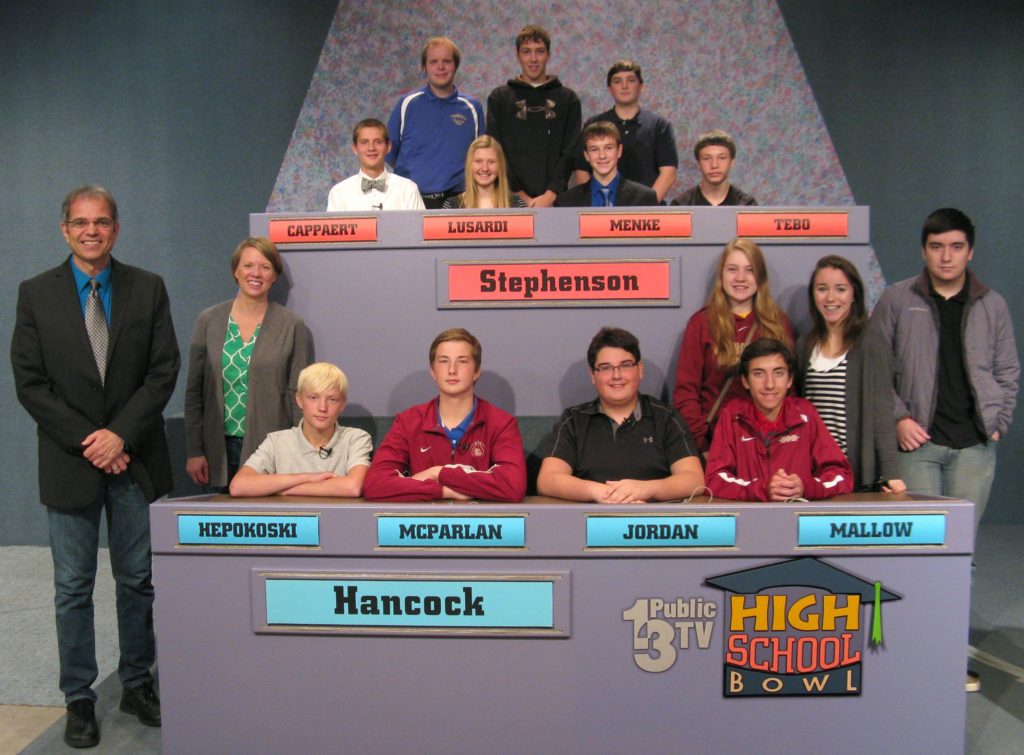 JK: As I said, I was a nerd as a little kid, and one of the things I used to love to do, and this was back in the Seventies, was take a ham radio and go through the dial and listen to all the clear channel stations from Chicago and Cleveland and Minneapolis and New York, and just to listen to all these signals from hundreds of miles away. And l realized that people actually made a living doing this. Now at that time, I didn’t realize you actually didn’t make much money working in radio but… (He laughs)…there was just a romanticism about it that hooked me.

BC: All right, you may need some time for this: the most traumatic time of your life.

BC: Happiest moment? Does anything stand out?

JK: There have been a lot of those. April of 1989 when I stood on the steps of the Marquette County courthouse  and said “I do” with Loraine. That was an amazing moment. There was a day in March of 2002 when I stood on a beach in Florida with my parents and watched the space shuttle Columbia take off. For a space nerd, that was an awfully big thing. There have been a few times when Loraine and I have gone to Europe that we’ve done something so cool that I just stand there and think “Wow! Everyone should get to do this!”

BC: You and Loraine have made frequent trips to western Europe in connection with World War Two. How did that come about?

JK: This is all of Loraine’s stuff. Almost twenty years ago, she found herself getting involved in this project to document the lives and deaths of the 244 men and women from Marquette and Alger Counties who died during World War Two. It started after we saw “Saving Private Ryan” and she was just curious as to whether there was anyone from Marquette who died in the war. So we happened to start walking through Park Cemetery. The first gravestone that we came across was a guy named Arthur Lemieux who actually died on June 9th. And that just kind of started it. She went with a tour group the first time and I’ve gone with her the subsequent times to get all the information that she needs while we drive around Normandy documenting these places where people have died. We’ve made a network of friends over in France and Belgium who help us out.

BC: When you’re home, what do you two like to do together?

JK: If you were to ask me what a perfect day would be, it would be walking around Marquette when the sun’s out and we’re just observing things. I’m taking pictures and she’s doing whatever she does. It’s warm, the birds are chirping. That to me would be a perfect day.

BC: I’ve seen you two walking the streets. Seems like you’ve had more than a few perfect days.

JK: Like I said, I apparently lead a charmed life.

BC: Do you contemplate retiring from radio sometime?

JK: I’m sure that will happen one day. The only time it ever pops into my head is when I meet with a financial planner and he says, “Okay, how long do you want to work?” And my response is “Just as long as I can.” Fortunately, I seem to be in good health and I have a good job here (at Q107) and a job at Public TV 13 (High School Bowl), and my history job. 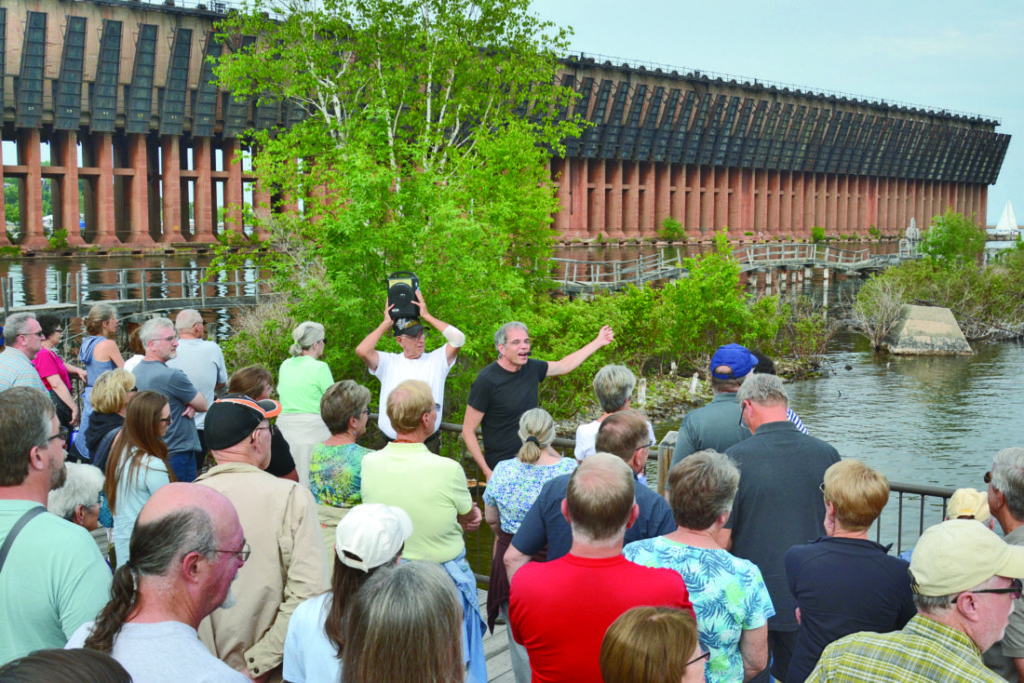 BC: And you like all three of those jobs?

JK: If I didn’t, I wouldn’t be doing them. One of the things I’ve always thought is life is too short to do stuff you don’t like. All of the jobs I have are different and they keep my creative juices flowing.

BC: At the end of it all, at the end of your “charmed life,” what would you like people to say about Jim Koski?

JK: (He pauses) He was a strange boy, wasn’t he? (He laughs) Well, as a student of history, I’m aware that for most  people, as they pass, the memories of them just scatter to the wind. But I would hope that if I am remembered at all, it would be as someone who tried to have fun in his life, and more importantly, tried to make everyone else smile in their lives.