The Dilemma for the UP, and an Ishpeming Man’s “Non-Urgent” Surgery

MEMORIAL DAY WEEKEND–the official “start” to summer in Michigan, a time when thousands of southern Michiganders traditionally make the trek north to the Upper Peninsula.

This year, there’s all the more reason to do so. The COVID statistics tell the story.

In the UP, we’ve officially documented just over 100 COVID cases and 15 deaths.

Who wouldn’t want to escape for a few days? Especially now that the UP, along with the northern Lower Peninsula, is reopening restaurants and bars. And gas is cheaper than it’s been in years!

And from what’s been reported, roads leading north were jammed over the last few days, especially around the Mackinac Bridge where delays were exacerbated by the bridge’s emergency policy of accepting only credit and debit cards.

The migration north, of course, is welcomed by most businesses–especially those tied to tourism–after a dreadful spring, but the question has to be asked: Is there a risk that the downstaters are bringing the virus north to the UP?

“I understand their desire to come up here,” says Marquette city commissioner Sally Davis, “and it gives me hope that we’ll see a resurgence in tourism. But I just hope that everyone who comes up here is cautious and follows all the safety guidelines. We don’t want a surge of COVID-19 in the UP.”

Optimistically, we can point out that the visitors aren’t flocking to any festivals up here–they’ve all been cancelled–and they likely won’t be flooding the streets of Marquette where social distancing–even in the reopened restaurants–is still being practiced.

“We need to keep in mind that most of these visitors are coming up here to visit their camps and the outlying areas, and not necessarily Marquette,” says city commissioner Evan Bonsall. “Ultimately we can control only what we, ourselves, do here, and hope that the tourists will respect our communities when they visit us.”

The UP needs their business and their money, but not their COVID infection rate. If that manages to migrate north, a sketchy summer will become something far worse. 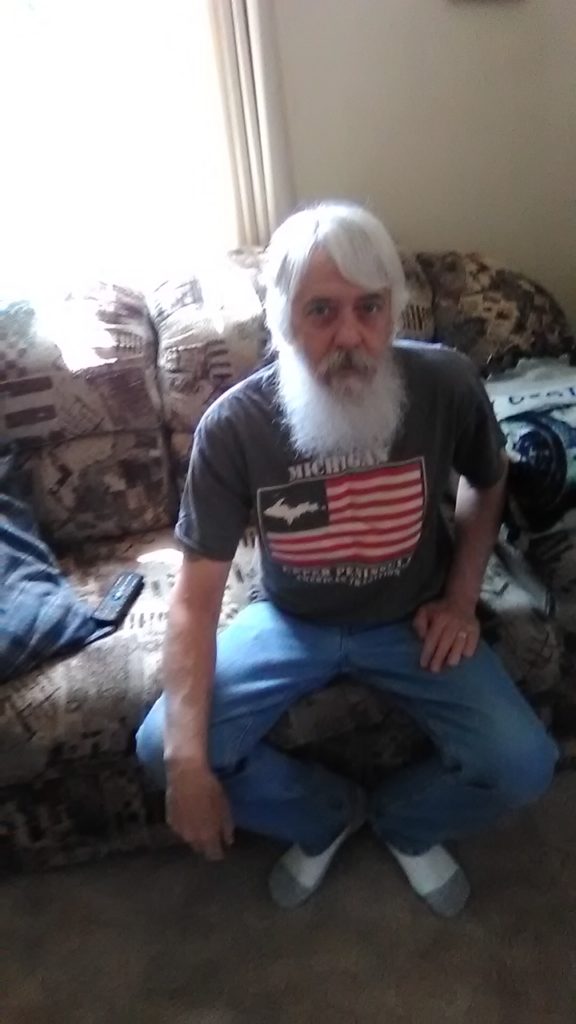 Covid has pushed other diseases to the side

COVID-19 HAS TAKEN a terrible toll on the U.S. so far–nearly 100,000 dead in little more than two months, and a once robust economy suddenly approaching Depression level unemployment numbers.

Something else that’s gotten little attention. “Non-urgent” surgery being delayed.

Consider the case of Charles (Skip) Lyons of Ishpeming (photo above). The 62 year old has been on disability for years but had recently lost 50 pounds. He was concerned and visited his doctor in Marquette.

“On March 17th, they diagnosed me with kidney  cancer,” he says, “but they said because of COVID, they couldn’t schedule my surgery until May 6th. But then on May 5th, they called me and said they’d have to postpone the surgery again because they didn’t have any argon gas (required for the surgery).”

Lyons is now being told his surgery will be scheduled for sometime in June. No date has been set yet.

It’s true, says Janell Larson, the communications director for UPHS, although she couldn’t comment directly on Lyons’s case for confidentiality reasons. “In March, we made the difficult but necessary decision to reschedule elective and non-urgent cases when deemed appropriate.”

The decision was made using guidance from the county health department, the state of Michigan, and the CDC, because of concerns that COVID cases might flood the hospital.  Yes, Marquette did have some COVID cases but, fortunately, they never overwhelmed the hospital system, and now things are returning, more or less, to normal.

“We have been able to safely resume some time-sensitive, non-urgent surgeries and procedures that were previously rescheduled out of an abundance of caution amid the pandemic,” explains Larson.

But what about the argon gas shortage, and the second delay?

“While we have adequate supplies to resume some procedures,” Larson says, “we–like many other healthcare organizations–have experienced some delays procuring certain supplies during the pandemic.”

All understandable. COVID-19 has created delays and scarcity of some supplies for hospitals all across the nation. They’re doing their best to return to normal–taking care of all patients while making money again with the “non-urgent” and elective surgeries.

Skip Lyons, however, questions whether his case is “non-urgent.” Kidney cancer is not something to dismiss lightly.

“I feel like I’m just sitting around waiting to die,” he says.

Oh, and the 50 pounds he had mysteriously lost before visiting the doctor? He says he’s been told that’s likely not been caused by the kidney cancer.

He’s still looking for answers to that question while awaiting his surgery.