The Future of the Old Hospital Property

SO, WE’VE GOT THAT new hospital, which, for travelers passing through Marquette… looks pretty good.  In with the new… out with the old.  Unfortunately, the old isn’t “out.”  It’s still with us, collecting dust, but no revenue.  Basically, just taking up space.

The question on everybody’s mind has been… what’s going to happen with it?  Is it going to turn into another Holy Cross Orphanage story?   Vacant for close to 40 years before it finally goes through restoration?  Or, worse yet, vacant forever until time and the elements do their dirty work?

It appears we’re getting closer to an answer.

The NMU Foundation is taking the lead in a very consequential and equally complicated project to get the property back to a useful and taxable chunk of Marquette.

Not familiar with the NMU Foundation?  It’s the primary vehicle that facilitates gifts to the university.  Their mission statement is:  “The NMU Foundation will establish and foster relationships to generate resources that benefit the strategic goals of Northern Michigan University”.

How will redevelopment of the hospital property address that mission?  That’s a good question, along with a few others.

The thumbnail explanation of what’s happening goes like this…  the NMU Foundation (NMUF) is purchasing the property from U.P. Health Systems for $1.  For their couch-cushion investment, the foundation gets the 23-acre property, including all the buildings that used to be the center of healthcare in the U.P., and $10 million to address the cost of relocating the few remaining employees still stationed there.

The benefits to UPHS appear to be some tax advantages and the end of any obligations to their former property. 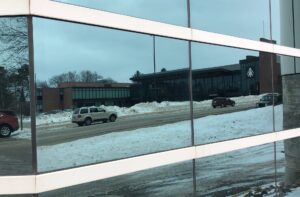 Assuming the project goes forward as planned, the NMU Foundation is going to be the proud owner of a large parcel of land that comes with plenty of potential and all the challenges associated with urban development.  So, why the sudden interest in real estate and property management from a university non-profit?

According to Dave Nyberg, Executive Director of Business Engagement and Economic Development, the foundation believes that helping facilitate the transformation of the property serves both the university and the community, and with that, adheres to the foundation’s mission.

So far, so good.  Except the recent history of promising developments in Marquette, particularly those that didn’t deliver what many had hoped for, has created a cottage industry for red flags.

The whole plan, still in its infancy, was outlined at a Special Meeting of the City Commission this past Monday afternoon.  Representatives of the NMU Foundation, including Nyberg and CEO Brad Canale, spoke to the vision of the project.  Interested residents filled the chamber while commissioners pressed the presenters for as many details as are currently available.  Surprisingly, only a few citizens spoke out, possibly realizing that it’s a little early for public input, but also concerned that when that time comes, it might be too late.

But, if you’re looking for snakes in the grass with this project, you might be disappointed.  The foundation’s motives appear to be wholly altruistic.  And UPHS surely appreciates someone else taking on a very costly reclamation project.  Plus, the City of Marquette, also a de facto partner in the project, would love to see the property returned to the tax rolls as a vibrant component in the community. 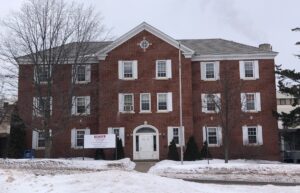 So much for the thumbnail explanation.  As previously stated here, it’s complicated, as one might expect from a development project of such scope.  And exactly what is the development?  That’s the $166 million question.

The foundation has brought in an architectural design firm, EUA, to help guide the process of defining and executing a way forward.  The foundation’s expertise is in accepting gifts to the university, not community development.  So, we can expect a number of different entities involved, no matter how the process proceeds.  The most important of those entities will be the developer, as selected by the foundation.

EUA came up with the $166 million figure as an estimate of what it will cost to redevelop the property after the site has been cleared.  The tentative plan is to turn the property into… what exactly?  So far, that’s undetermined, and that’s where the red flags are poised and ready.

Again, going back to the NMU Foundation’s intentions, they are fully committed to seeing the property reflect the needs and nature of the community.  But here’s the catch, and it’s one we’ve seen before.  Once a developer takes over, the community’s wish list becomes secondary to the goals of the investment.   Somebody’s gonna want to make some money.

There are a few safeguards that should come in to play.  For one, Brownfield money is on the table to help pay for demolition, some $15 million worth.  With that, the Marquette City Commission will have a say in the final plan, contingent to approval of the Brownfield designation.  There’s also a Tax Increment Financing component, Michigan Economic Development Corporation involvement, and a number of other governmental elements important to the process. But those details aren’t nearly as fun as imagining what might be.

The foundation will also have influence on what the final plans might look like, and there won’t be any shortage of suggestions.  City commissioners and residents alike have expressed the need for affordable “workforce” housing.  If that isn’t addressed, it’s a missed opportunity, and possibly a deal-breaker for any community endorsement.  It’s also conceivable that the site could include a commercial element, or some green space, or maybe something related to the university.  Right now, it’s a blank tablet.  Blank, except for that line at the bottom. 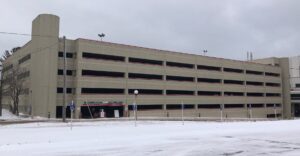 Before we go any further, a little something about the demolition, as in… do all these buildings really need to be torn down?  Haven’t we learned our lesson?  Like, wouldn’t it be nice if Kaye Hall was still standing?  Or, for that matter, even the recently razed Jamrich Hall?  Can’t anything be saved anymore?  What about the Neldberg Building?  It still looks new!  That parking structure could come in handy someday, couldn’t it?  And the Wallace Administration Building is a classic structure.

I guess if you’re going to invest $166 million, it’s your call as to what stays and what goes.

One word that was used more than once in the informational meeting was “transformational.”  That’s how the project is being framed by those in support.  And it’s hard to argue with that, provided the development lives up to its initial overtures. Undeniably, with a number of collaborators in the mix, the future of a large parcel of land in the balance, and a nine-figure financial investment at stake, this project will be one of the most impactful ever undertaken in the U.P.

We’ll keep an eye on it and hope for the best.  The feeling here is that the NMU Foundation’s initiative is well-intentioned with the good of the entire community, not just NMU, in mind.  They’ve stepped up and taken the first step necessary to move the development of the property forward.  And that’s a step in the right direction.