The Homeless… and Other Words

Have you driven by the Room at the Inn Warming Center on West Washington lately?  Did you look?  Or did you look away?

Like almost every other city in the nation, Marquette has a homeless “issue.”  For one reason or another, there’s a certain percentage of the population that just can’t seem to pull it together enough to find and keep a place to live. 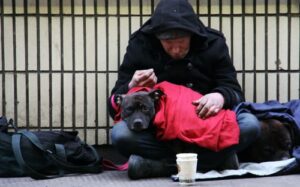 Is it just an issue, or is it a problem?  If all you see is a group of people who seem to be doing no more than loitering and taking advantage of free services, then you probably think it’s a problem.

Fortunately, we have local agencies that don’t see the homeless as a problem, but rather see homelessness as an issue to be addressed for the benefit of all.  Homeless… not hopeless.

Room at the Inn is a good example of what a community can do to help our homeless population not be homeless forever.

Begun in 2007 using local churches as overnight lodging during the cold winter months, Room at the Inn has morphed into a full-time resource for our homeless community members to gather for meals, laundry and shower service, phone/mail service, guest advocacy, and most importantly, a sense of community. 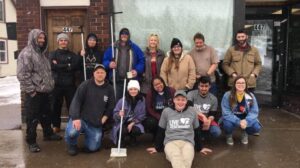 The Warming Center became a thing a few years ago but most recently, on Christmas Eve 2020, began hosting guests as a permanent shelter.  As many as 30 people can occupy the facility, with a typical night seeing almost that many taking advantage of the service.

But a bed for the night is just the beginning of what Room at the Inn offers our under-served population.

“Our emergency shelter is undergoing a culture shift towards being housing-focused, meaning we create an environment where from the second you step foot in our shelter to the second you walk out, your daily activities are primarily directed towards identifying more permanent housing.”

That’s the theory according to RATI Executive Director Nick Emmendorfer.

“We’re a behavior based shelter program, which was a major shift for us getting away from breathalyzers and income requirements for shelter stay. Today, respectful behavior is required to maintain a shelter stay, but sobriety, income, and life-skills courses are not, as those methods for entry typically only serve to prevent the people who need shelter most from getting it.”

In other words, they’re trying to reach the hard-to-reach.  Many victims of homelessness stay that way because of shelter rules they don’t want to follow.  You might say… “tough.”  But that doesn’t always work.  Room at the Inn has modified its programs to respond to what does work.

“Though we provide a place to go 24/7 with day and nighttime shelter, all guests are expected to maintain and work on a housing plan while in the shelter. It’s a stepping-stone on the path to housing, not a final destination. It’s important to note here, length of stay at the shelter is primarily dictated by the housing opportunities our community can provide, not the individuals seeking shelter.” 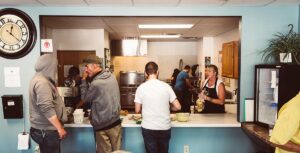 So while someone may be ready to “graduate” out of the RATI shelter, the lack of available and affordable housing in Marquette is still a hurdle to that next step.

While housing the homeless in a centralized location at the Warming Center has improved the lives and futures of many, it’s not perfect.  There ARE problems.  According to the Marquette Police Department, RATI consumers are the reason for a “significant number of complaints.”

Unfortunately, those transgressions are usually much more visible to the public than the success stories.  While some still see only the loitering and other public nuisances, Emmendorfer sees progress.

“One cool statistic is that in 2018 we saw an average of 40 police contacts a month in Marquette with homeless individuals. The first two months the shelter was open only saw eight contacts a month.  By giving these people a place to go, they are less disruptive to the general public.”

It’s important to note too that Room at the Inn is just one of many local agencies addressing the issues of the homeless and those needing additional resources.

Other agencies serving the homeless…

Lutheran Social Services of Wisconsin and Upper Michigan has a program called Rapid Rehousing which addresses the needs of families, as well as individuals, rapidly moving households out of homelessness and into housing, with the goal of long-term stability.  Serving families requires an entirely different set of processes, but is equally as valuable.

Superior Housing Solutions works to ensure that all vulnerable individuals, including those who are homeless and/or near homeless, have access to housing that is safe, affordable, accessible, and appropriate to promote self-actualization in an inclusive and supportive community.

Community Action Alger-Marquette administers the Emergency Solutions Grant (ESG), funded by MSHDA. It’s a program that provides funding for people who are either literally homeless (i.e. living on the streets, in a car, in a shelter or a safe haven) or could become homeless due to an imminent pending eviction.

The Women’s Center also has programs to serve its homeless clients.  According to Executive Director Beth Casady, “Domestic violence is the number one reason women become homeless in our country.”   They have a shelter for emergency housing for domestic as well as sexual violence survivors.  Many of their clients are eligible for MSHDA funding and their advocates work with Community Action Alger-Marquette, as they are the entry point into affordable housing for Alger and Marquette.

Homeless… not hopeless, thanks to the tireless efforts of a few agencies and a lot of volunteers.

The Third Street Marketplace, Joe Constance’s project in the old Valle’s Grocery building is on schedule for a September opening.  According to Constance, all the spaces in the complex are spoken for, and it looks like they’ll represent of variety of interests, particularly targeted at Third Street traffic.  Constance is hesitant to name all the leaseholders until everything is finalized, but he did say that one food truck is already operating and another will begin soon.

Also… Cognition Brewery, the popular brew pub based in Ishpeming’s Mather Inn, is a solid go…  so look forward to your favorite Cog brew just in time for… well, when you’re thirsty. 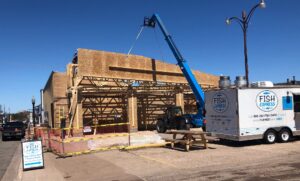 The building took a visual hit a couple of years ago with the installation of less-than-attractive exterior siding.  With a new look and a good mix of vendors, the Marketplace could be a nice bump to the top of Third.  It’s all good.