The next Traverse City?

IS MARQUETTE BECOMING the next Traverse City?  That’s the question we’ve been asking for the last 20 years or so.  And what ordinarily sounded like nothing more than a little bluster coming from the coffee klatch crowd, suddenly seems a little less absurd.

Tourist traffic, while off the charts last summer, is no longer just a seasonal phenomenon.  Marquette is now well-established as a year-round destination, in spite of the routine winter travel challenges.  And all indications are that this summer will be busier than last, with a little extra congestion thrown in due to road construction on South Front.  Ever try to drive through Traverse City in July?  Is that what’s coming to Marquette?

And, in addition to ore-to-shore humanity, we’re all well aware of the housing crisis.  The lack of affordable housing is severe, particularly in the service-worker sector.  Do a Google search and you’ll find that’s where Traverse City was… ten years ago.

And now there’s something else on the horizon that might further align us with our neighbor to the south.  It’s House Bill 4722, which says this:  Notwithstanding any other provision of this section, a local unit of government may limit the total number of units used for short-term rentals in the local unit. The limit shall not be less than 30% of the number of existing residential units in the local unit of government and shall apply without regard to the location of dwelling units

An original draft of the bill allowed for no limit on the number of short-term rentals, but subsequent debate resulted in what amounted to a compromise, with a limit of 30%.  Marquette regulations currently allow for no more than 250 Airbnb’s at any one time.  If the bill is passed by the state senate and signed by the governor, that would mean we could see as many as 3000 units, with neighbors more temporary than a spring warmup.

Municipalities statewide are largely opposed to the bill.  The Michigan Municipal League, which represents city governments across the state, says, “…special interest groups have fought to open the flood gates to short-term vacation rentals in Michigan’s communities and turn our neighborhoods into a series of mini hotels that are only occupied seasonally.” 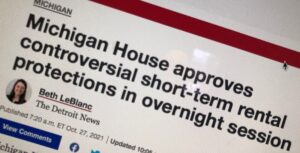 The Michigan Townships Association has also weighed in with their objections.  “The legislation threatens the ability for local municipalities to manage the number and location of rentals across Michigan, undermining local control and upsetting the delicate balance between property rights and the established, transparent process for local decision-making.”

Naturally, there’s a counter to the opposition.  The real estate industry in particular has come out in favor of the legislative action.  Michigan Realtors®, an advocacy association, states their position on their website…  “The ability to rent residential property is fundamental to ownership. Communities across the state have long recognized short-term rental as an important tradition that provides a tremendously positive impact upon the local economy. This tradition promotes Michigan as a great destination.  Reasonable regulation of rental activity, outside of zoning, protects the rights of all property owners.”

Ah yes… the rights of property owners.  It seems to always comes back to that, doesn’t it? 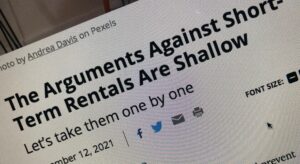 In Lansing, lines are drawn almost exclusively according to party affiliation, with Dems against and Repubs in favor.  Our state rep, Sara Cambensy, voted against the bill when it was passed back in October.  There’s also an alternative idea that’s been proposed which would impose a special tax on Airbnb’s and generate additional revenue similar to taxes paid by traditional commercial lodging.  However, that money would more than likely be steered towards travel bureaus and other tourism based agencies and not to the community in general.  Those who opposed the initial bill, like Cambensy, may find they can support something that generates additional revenue.

State Senator Ed McBroom will have the chance to voice his opinion when the bill comes before the senate sometime in the near future.  The house bill was passed in the early hours of October 27th, 2021.  Some would call that, “in the dark of night.”  It’s also been suggested that special interests have been driving the issue, and that our legislators intentionally called the bill for a vote when fewer eyes were open to witness the decision-making.  Or, to their credit, maybe they were just working late.  We’ll see how the senate handles it.

The Mackinac Center for Public Policy, a right-wing leaning think tank, also favors the bill.  Their position can be boiled down to this one sentence, found on their website…  “The government should allow people to do what they wish with their property as long as they don’t violate the rights of their neighbors.”

In addition to those rights, the issue has other ramifications, not the least of which is… available and affordable housing.  Turning as much as 30% of your housing stock over to the short-term rental market does little to alleviate the shortage of residential options for full-time residents.

And then there’s the “good neighbor” concept of community living.  Marquette’s neighborhoods have never been more vibrant.  They haven’t.  Look around and you’ll see a lot of young homeowners, and a lot of young renters hoping to be homeowners.  Because of what this town is like, right now, people want to live here.  How much do we want to tinker with that?

Proponents suggest that the new legislation won’t take away all STR regulations, and like other similar issues, it’s a balance between private property rights and municipal rights.  Who knows?  Managed properly, it’s entirely possible that a community could benefit from the growth of a relatively recent form of  visitor lodging.  Just like Traverse City, Marquette is now faced with the new realities that come with a surge in popularity.  A lot of communities would love to be burdened with such a problem.

The idea that friends of yours might try to earn a little extra dough by turning their second property into an STR might not seem like a bad idea on its face, but often it’s not someone you know who owns the property.  It’s just as likely an out-of-towner with nothing more than a profit-driven stake in your community. The quality of life might suffer for the locals, but as long as the check clears… well, you get the idea. 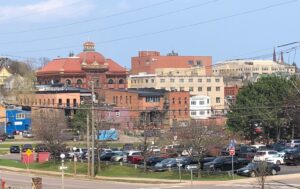 The “don’t change anything” crowd used to be regularly dismissed as anti-progress and unable to see the future.  Well folks, the future is closer than we thought.  And it’s very possible that there’s some community out there right now saying, ‘we don’t want to be the next Marquette.’

It was more than 150 years ago when the British politician Benjamin Disraeli said, “Change is inevitable.”  As far as we know, he didn’t specify whether change was good or bad, just inevitable.

Fortunately, as citizens of this republic, we still have a voice in the direction and tone of inevitable change.  If you have an opinion regarding the future of House Bill 4722 and its senate counterpart, SB 446, you can share that with our elected representatives.  Their contact information, as well as the bills in question, can be found at www.legislature.mi.gov.