The Tipping Point • And a Bike Race

Seinfeld fans will remember Jerry asking, “How much do you tip a wood guy.”  Of course, Jerry lived in New York City, where almost everyone, including the guy who drops off the firewood, expects a tip.  It’s a city thing.  Out here in flyover country it’s a little different.  Extending the hand is usually for a shake, not a shekel.  Usually.

Like so much other stuff affected by the pandemic, our tipping habits have changed too.  Those service workers, who we now recognize as “essential,” are seeing a little more appreciation these days.  And by “appreciation,” we mean money.  Good service rewarded with lip service doesn’t pay the rent.  Will the generosity last?  We’ll see. 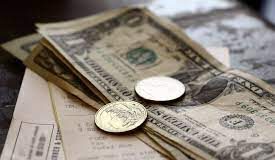 When we’re talking about wait staff… the people who actually work the tables, tipping is pretty straight-forward.  Start at 20% and go up or down based on overall performance.

By the way, if you’re actually old enough to be a Seinfeld fan, you might remember when the accepted tip was closer to 15%.  But everything goes up, right?  Apparently, that includes the percentage-based tip, which seems excessive given that tips would increase automatically as the cost of dining out goes up.  But maybe that’s too obvious.

And maybe that’s picking a nit, but navigating the tipping scene can be a little intimidating.  A mishmash of labor laws and the different ways employers pay employees make calculating the appropriate tip an exercise in both math and compassion.  And let’s face it… when the deal is done, who wants to look like a cheapskate?

Restaurants in most states are allowed to pay a lower hourly wage to tipped workers.  In Michigan, it’s $3.67.  Of those restaurateurs we’ve reached out to locally, some pay the minimum while others pay more.  But in all cases, the business must make up the difference if wages and tips don’t reach the non-tipped minimum wage. 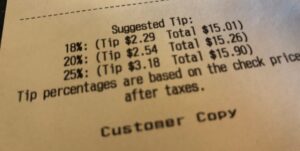 So, tipping the waitress at your favorite eatery can be easily justified.  That young lady has a college loan to pay off and you want to show appreciation for a job well done.  But did you know that most places share tips among the wait staff?  And with the backroom crew?  So regardless of the wages they’re paid by the employer, and the quality of their work, almost everybody that has a hand in your meal gets a cut.  (Sorry for the visual.)

But these days, as long as there’s some personal service involved, more workers from a variety of industries are counting on your largess.  It’s not only the aforementioned wood delivery guy, but it’s also the counter guy who takes your order, the salon worker, the flower delivery driver, and everybody else who puts out a tip jar.

Which begs the question… what the heck?  We’re still expected to tip people even though they’ve been hired to do a job… at an agreed upon wage… to be paid by the employer?  What’s next?  A tip for the nurse who takes your blood pressure?  Makes just as much sense.

We understand the concept of tipping people who wait on our table or serve us our drinks at the bar.  We typically demand a little more attention and reward them accordingly.  But a tip for someone who just hands us a product over a counter?  That seems a little redundant.  How many times do I have to pay you?

If you were to think the worst, you might suggest that some employers count on tippers to ensure their employees receive a fair wage, when they could take care of that themselves by simply paying a fair wage.  But then, nothing’s ever that simple, is it.

The apparent worker shortage has changed things. Many business owners are upping their wage scale and even offering signing bonuses just to fill out a full staff.  And as mentioned previously, many locals already pay a reasonable hourly wage. 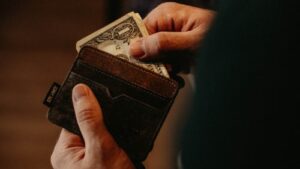 Now, regardless of whether you think wait staff employees are over or underpaid, it’s important to note that no two shifts, or restaurants, are alike.  Sure, enduring a two-hour wait for a table on a Friday night might make you think service employees are raking it in.  And sometimes they do.  But for every bustling summer night there’s a Tuesday in February where the wait staff starts wondering where THEIR next meal is coming from.

Tipping in one fashion or another has been around forever, and with that comes a certain historical and social significance.  Sexism, racism, classism, and probably a couple more isms come into play.  The whole thing boils down to someone’s worth. Is there a Tip Calculator for that?  (Final Seinfeld reference.)

A few restaurants have gone “no-tipping,” with very limited success, and there’s a quiet movement afoot to do away with the “subminimum” tipped wage.  Bottom line… wait staff workers make more money with tips, so that ain’t going anywhere.  And even though some restaurant owners will swear they need it to keep prices in check, that 3 dollar something tipped wage seems ironically… gratuitous.

In conclusion… enjoy the time out.  And when it comes to the tip, here’s a good one… if you think they need it more than you, give it to ’em.

By the way, the Ore to Shore is tomorrow.  You can still register for that and pick the race that suits your age and ability.  Get more info at:  oretoshore.com.