The Valle’s Deal is Close, and the Tourists Are Here

Financing is in place

STEP BY STEP, the conversion of the old, abandoned Valle’s market into something more vibrant and exciting–the Third Street Marketplace–is coming closer to reality.

Restaurateur Joe Constance is working on a deal to buy the property.

“It’s not finalized yet but I’m very optimistic,” he says. “I expect that we’ll be closing on it in August.”

The deal had been contingent on his signing a lease with a particular tenant who would occupy one half of the Valle’s store; Constance says that tenant now has secured financing and is ready to move in and start remodeling, but Constance says until the overall purchase is finally signed and sealed, he’s not ready to declare it a done deal.

Still, he’s moving ahead with the project. He envisions the spacious Valle’s parking lot as a venue for food trucks–maybe five of them–with plenty of outdoor seating. He, himself, has already set up one trailer–the Fish Express, with former chef Kevin Bray, in charge.

“I saw it advertised on eBay,” says Constance. “It was down in Florida, brand new, but it hadn’t been used. A good price, so I got in my pickup, drove down there, hooked it up, and brought it back.” A 3400 mile round trip.

It’s now sitting there in the parking lot, next to the Fish Express. He sees two possible uses for it:

1) If the COVID crisis shuts down restaurants again, he’ll set it up in the parking lot of the Iron Bay, his restaurant next to the Lower Harbor, and serve Iron Bay food out of the trailer.

2) Eventually, though, it’ll be set up as a Big Al’s retro food trailer, specializing in onion rings, specialty hot dogs, and Hammy Sammys. Big Al’s was a popular Marquette restaurant from a few decades ago.

And Constance also wants to buy yet another food trailer that would specialize in barbecue.

He’s also offering to provide permanent space for other existing food trucks who would rent from him. He’s had some bites from them, but so far nothing definite.

Meantime, Constance’s other restaurant, the Iron Bay, is doing all right, considering the spacing conditions all restaurants are having to deal with. He says June’s sales were 81% of what they were last year. Okay, but not great, considering that summer is when all tourist-related businesses need to build up their profits.

July should be better. 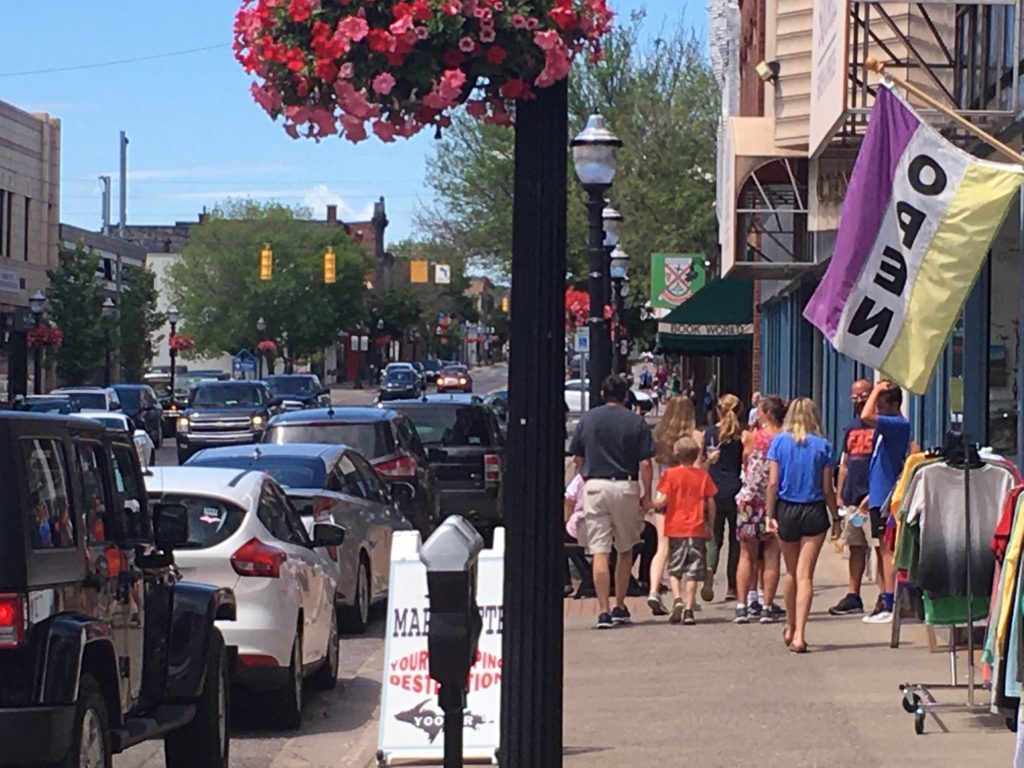 Take a look downtown. The tourists are here, COVID or no COVID.

“We’re hearing that business has been good this summer and comparable to that of previous summers,” says Rebecca Salmon, the executive director of the Downtown Development Authority. “Tourism appears to be strong, with a noticeable increase in the number of people strolling the sidewalks of downtown and out-of-state vehicles traveling the streets.”

Especially on the weekends, and especially over the Fourth of July.

A few businesses have remained closed–most prominently, the Vierling, a longtime tourists’ favorite–during the pandemic, but only one, according to Salmon, has shut down for good and that’s the Border Grill on Third Street.

Masks? Yeah, there have been some complaints that tourists, hearing that the UP is essentially COVID-free, weren’t wearing them, but in the last week or so, after Governor Whitmer’s latest directive, more of them are masking up, not only in the stores and restaurants but on the streets. Good news.

More good news. It appears that a few more downtown businesses will be awarded grants to refresh their facades. Some of the $300,000 originally given to the DDA for facade grants hasn’t been spent yet, so new applications for the grants were recently accepted.

The winners for those new grants should get the good news within the next couple of weeks.

COVID has hit us hard but it’s good to know that most businesses are already looking beyond it–to a time when COVID will no longer be an every day concern…and when life and business get back to normal.