The View from the Sidewalk

SARAH BANNAN’S ONE of those nurses in red shirts walking outside the hospital yesterday and again today.

Holding a sign. Waving at honking cars. Putting in her unpaid, eight hour shift on the sidewalk even though she’d much rather be inside the hospital taking care of her patients in the cardiac unit.

She needs the money because she’s a single mother with two young kids at home.

But she, like most of the 400 other nurses at UP Health System-Marquette, says enough is enough. They say Duke LifePoint, the owner of the hospital, has made life miserable for them and unsafe for their patients.

“The first year Duke took over was fine,” she tells you. “But as soon as our contract was up, every week was a new change. They started cutting people left and right. Some of my best friends lost their jobs.”

She pauses as two passing cars lay on their horns. The nurses around her raise their signs and wave. 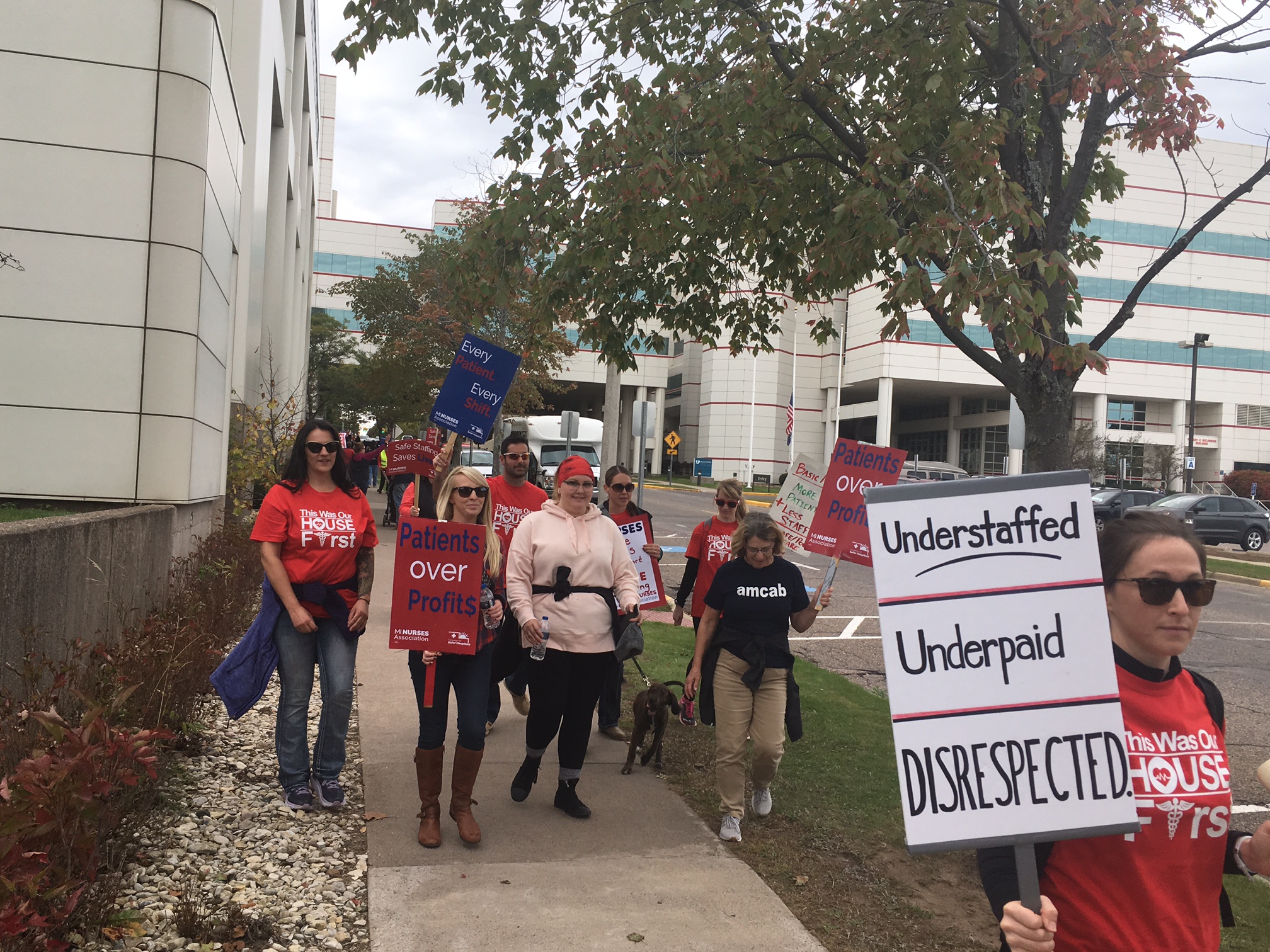 Sarah returns to her story. She claims that before Duke Lifepoint took over, the ratio was roughly four patients for every nurse (it varies from floor to floor). Now, she says, it five or six to one, and with fewer nurses aides to help them out.

In addition, managers who previously were in charge of one floor or department are now managing two floors or departments.

But it’s the frequent mandated overtime that really gets to Sarah. “My shift usually ends at 3 pm or 3:30, and sometimes they tell me at 2:45 or 3 that I have to stay,” she explains. “That happens a lot. I can’t make plans with my family. I can’t see my kids. And it’s not good for the patients!”

And if she refuses to stay overtime? She says she’d be charged with abuse or or neglect of her patients. Not something a nurse wants on her record.

“It’s very stressful,” she tells you, as she nods to a passing picketer. “I’m always stressed out at work and at home. I really don’t have a life outside of this hospital.”

She doesn’t speak ill of the replacement nurses who’ve been bussed in. “I mean, I understand some of them are just trying to make money and make ends meet, but they’re making three times what some of us are making! What does that tell you about Duke LifePoint?”

It tells her that Duke Lifepoint is trying to bust the nurses’ union, no matter the cost.

“I doubt this walkout will do much,” she says, “because they don’t care. They don’t care about anything but the dollar.”

She waves to a honking motorist and joins a group of a half dozen picketers who, like her, have spent all day outside their workplace, wondering about their future and the future of Marquette’s hospital.

Her parting words: “I don’t think Duke knows who they’re messing with. This is our hospital and our community. I’m sure we’re going to be walking out again.” 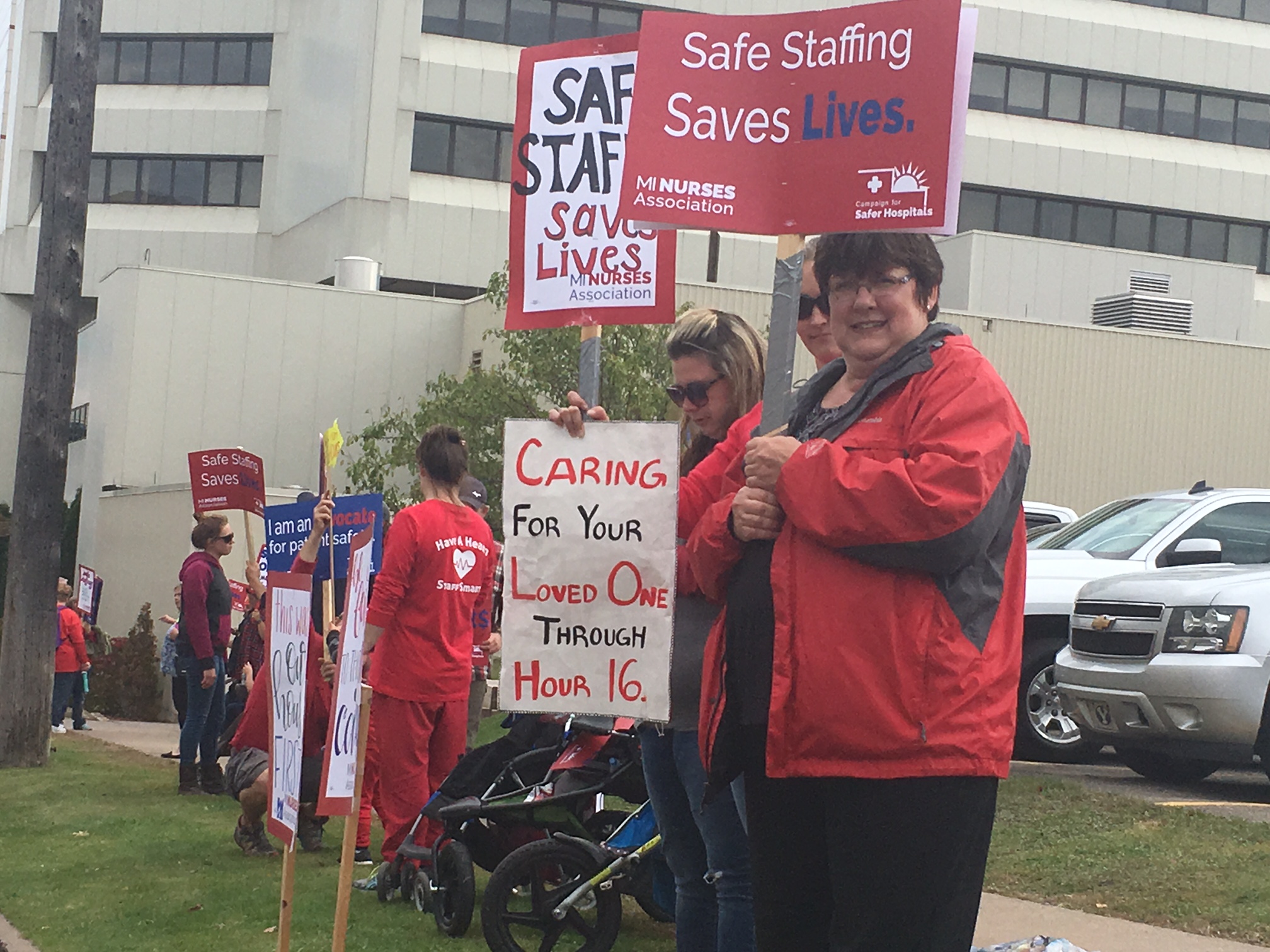 (Word on the Street requested an interview with one of the replacement nurses inside the hospital to get their perspective. Hospital management turned down the request.

What they provided, instead, was this statement:

“We appreciate the support of our employees and physicians, the nurses who chose to cross the picket line, and our temporary nursing staff. They are instrumental in our ability to continue providing exceptional care to our community and ensuring that all hospital services remain open and accessible.”)