The Virus Is Spreading (but it’s a good one)

SO THIS IS the day we’re supposed to be a little nicer to each other. More thoughtful, more helpful, more empathetic.

Such a quaint notion.

Frankly, when Spread Goodness Day was announced by Marquette resident Anna Dravland (above, on the right) more than two years ago, it seemed like a one-off. Some of us would earnestly try it for that one day and then forget about it.

Well, it’s still with us two years later, and apparently growing, even with all the cancellations and closures because of concerns about COVID-19.

NMU’s involved, so is Marquette Senior High School, along with massage therapists, car detailers, all sorts of people. Big projects at schools, nursing homes and homeless shelters, little projects as well, and just simple, individual acts of kindness. Dravland’s heard from folks downstate who are involved, in Los Angeles and Pensyslvania, as well. Even from foreign countries. She’s doing an NPR podcast on Spread Goodness Day.

“I remember that first day two years ago,” Dravland says. “I wasn’t able to do much but sleep, but then I’d wake up and I’d find out that people were doing things. They were really doing something! I was so surprised and so happy! I still get that feeling.”

Dravland, herself, of course, is a huge part of this story. Four months before the first Spread Goodness Day in 2018, she suffered a debilitating stroke. A 34-year-old woman. It should have ended her plans for the big day but it didn’t.

While relearning how to speak and walk, she soldiered on with her plans, picking up vital support and help along the way. And they pulled it off, even though Dravland, fighting off understandable depression, spent most of her time resting and sleeping. 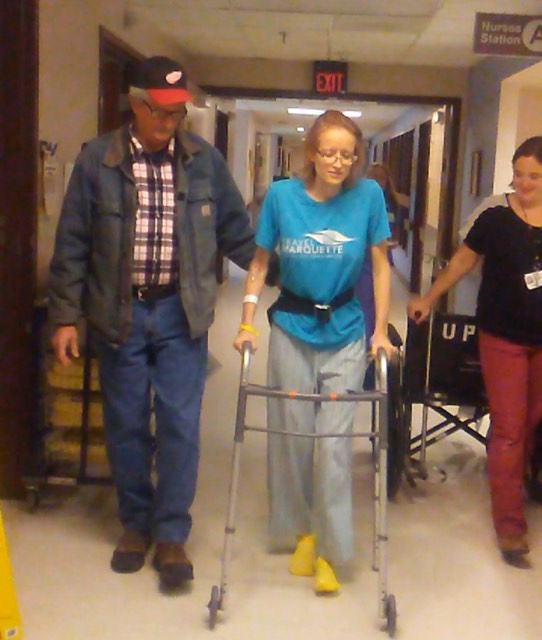 Anna had to learn to walk again after her stroke in November of 2017.

And two years later, while her condition has improved somewhat, she’s still struggling physically and mentally. Her brain gets foggy, her body goes numb at times, she’s constantly fatigued, her vision’s impaired, she’s not able to work. She’s generally in bed all but four hours a day.

She’s a young woman who should be angry at the world, at the injustice of it all.

And yet here she is on the third annual Spread Goodness Day, urging people to be good to each other. Yes, many are doing organized projects in coordination with Anna and her support staff, but many others, she believes, will just do something quietly, on their own, unnoticed.

Acts like smiling at strangers, opening doors for them, helping neighbors with snow shoveling, checking in with troubled friends, buying coffee for the guy in line behind you. Maybe reconciling with estranged family members.

“When people do good on their own,” she says, “I think it might even be more powerful and more likely to happen again.”

It’s a message we might all take to heart at a time when we’re dealing with a frightening national health crisis and a toxic political environment.